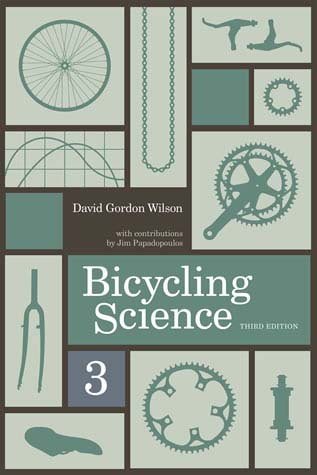 The MIT Press and Bicycling Science made me a guru. It was all a mistake. I found myself enjoying life in the US after teaching for two years in northern Nigeria. I felt guilty. My coming over from Britain in 1961 apparently dealt the pound a nasty blow, because I was not allowed to transfer my exiguous savings over here. So I thought, “I’ll offer a prize, most of my British money, for developments in human-powered vehicles.”  We named it the “Man-powered (apologies!) land transport competition” in 1967-8 in the British magazine Engineering. I was enthusiastic about bicycles because my parents would not allow me to ride one until I was nine, by which time I was like a coiled spring. I used to fantasize about my bike while I was in school and should have been concentrating on Latin ablative absolutes. And two years later the Second World War started, and we found that we could bicycle prodigious distances when private cars were banned. I had a lot of help organizing and judging the competition, and it was a surprising success. One of the British entrants, Frank Whitt, met me when I visited London, and as we parted at the railway station he thrust into my hand an envelope bulging with mainly loose papers with a cover page “Bicycle Motion.” “Please get this published in the US,” he shouted as the train accelerated, almost as if he were saying, “Here’s a bag of peanuts for your trip.”  He explained later that he was told that if it were published in the UK he would have to convert everything to S.I. units, and he hated metric units. I told him that I loved them, but I would translate everything necessary.

The loose papers, which became the first draft of our book, were far from peanuts. I spent months writing to publishers:  every one, including The MIT Press, turned me down. But then the Press’s Frank Satlow wrote again. He stated that if I rewrote Frank Whitt’s draft, and if I added a review of the competition winners and of my work, he would consider recommending the book for publication. To my amazement and delight, the book (now renamed “Bicycling Science”) was accepted and published. Next came another stunning stimulus: the late great Philip Morrison reviewed it for Scientific American and recommended it. After that accolade, over thirty reviews followed, it was bought by more people than I thought reasonable, and my unearned guru status was confirmed. Frank Whitt, a warm solitary genius, died as we started on the second edition, and Jim Papadopoulos contributed much to the third. The MIT Press has continued to be extraordinarily supportive. Thank you indeed!