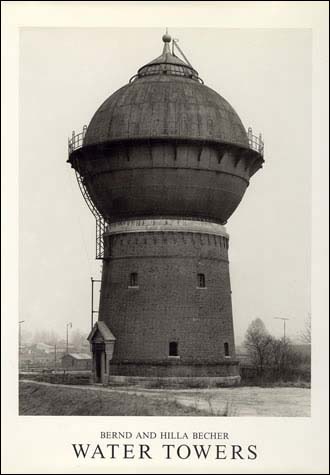 After a Veterans Day weekend hiatus, we’re back with day 20 of our 50th anniversary series. Roger Conover, Executive Editor of Art, Architecture, and Visual & Cultural Studies, talks about Water Towers by Bernd Becher and Hilla Becher:

In the early 1980s, Hilla and Bernd Becher were well-known in Europe, but they still had very little recognition in the United States. That changed in 1988, when MIT Press introduced their first book to the American public. After Water Towers, we published virtually all of the Bechers’ collections of photographs of industrial structures, but this book remains their most iconic collection and the building type with which they will always be most closely identified in America, in part because their survey includes American water towers. We asked the architectural critic and historian Reyner Banham to write the foreword to the Bechers’ first book in English; the subject matter related closely to his interests, and he had just published A Concrete Atlantis (MIT Press, 1986). This was the Bechers’ first introduction to Banham, but in subsequent years, they would often refer to his book in their discussions of grain elevators.