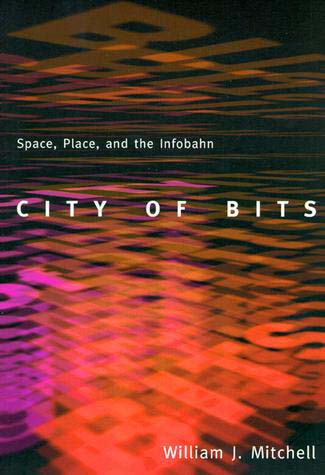 We hope that you had a wonderful Thanksgiving! Our 29th post in the 50th anniversary series is a particularly prescient passage from City of Bits: Space, Place, and the Infobahn by William Mitchell:

The most obvious epicenter of this shakeup is the information business. And it is particularly instructive to consider the fate of one of its most familiar architectural manifestations, the book shop. Where will we find twenty-first-century Pickwicks?

The problem with printed books, magazines, and newspapers—Gutenberg’s gotcha—is distribution. Paper documents can be mass produced rapidly at centralized locations, but they must then be warehoused, transported, stocked at retail outlets, and eventually hand carried to wherever they will be opened and read. There are built and specially equipped places for each of these activities: the publisher’s office, the printing plant, the warehouse, the bookstore, the newspaper kiosk, lounges and waiting rooms stocked with magazines, and the easy chair beside the fire. These places are distributed at appropriate locations within the urban fabric and play important roles in differentiating that fabric and the activities unfolding within it. Harvard Square would not be the same without Out of Town News and its diverse collection of bookstores…

When we separate information from its usual paper and plastic substrates, though, stockpiling and transporting physical products become unnecessary. Consider, for example, a venture announced by Blockbuster Entertainment (a large video-rental and record store chain) and IBM in May 1993. The idea was to store recordings, in digital format, on a central server and to distribute them via a computer network to kiosks in record stores. There, customers could select recordings from a menu, download them to the kiosk, and copy them to CDs on the spot. Bookstores could work the same way, by downloading texts and rapidly laser-printing them. Through such point-of-sale production, the producers and wholesalers save on inventory, warehouse, and transportation costs, the retailers save on shelf space, and the customer potentially gets access to a much wider selection.