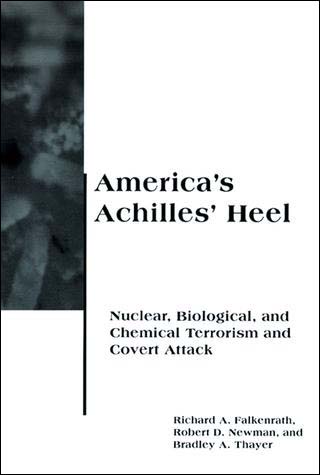 America’s Achilles’ Heel is a path-breaking analysis of the threat posed to the United States by terrorists armed with nuclear, biological, or chemical weapons. Written long before many people had heard of Osama bin Laden (although he is mentioned in the book’s footnotes), America’s Achilles’ Heel was one of the first serious examinations of this issue. It attracted wide attention for its painstaking analysis of whether terrorists would have the capability and motivation to acquire and use nuclear, biological, or chemical weapons. It also offered detailed recommendations for the United States. After completing the book, Falkenrath had an opportunity to put its insights into practice. He served on the National Security Council staff during the presidency of George W. Bush and then was appointed Special Assistant to the President and Senior Director for Policy and Plans within the Office of Homeland Security. He later was promoted to Deputy Assistant to the President and Deputy Homeland Security Advisor and helped to develop U.S. homeland security and counterterrorism policies. He subsequently became Deputy Commissioner of Counter-Terrorism in the New York City Police Department.