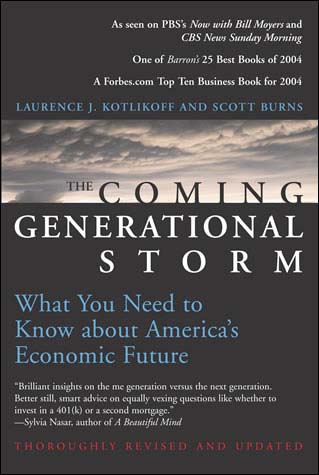 Editorial Director Gita Manaktala on The Coming Generational Storm: What You Need to Know about America’s Economic Future by Laurence J. Kotlikoff and Scott Burns for day 44 of the 50th series:

The idea for this landmark 2004 book emerged from conversations between Boston University’s Larry Kotlikoff, an expert on generational accounting, and his MIT Press editor Elizabeth Murry. Alarmed by the prospect of retiring baby boomers, whose Social Security and health care benefits would have to be funded by taxes on a much smaller pool of U.S. workers, Kotlikoff teamed up with personal finance columnist Scott Burns to analyze the problem. In their resulting book, this disillusioned duo offered a stern moral message alongside their hard-headed analysis: it is wrong for older generations to deprive their children and grandchildren of economic security, and to shift wealth in their own direction at the expense of future generations. This, as they saw it, was the explicit policy agenda of the powerful American Association of Retired Persons (AARP): to extend and gild the golden years of its constituency of voters.

If their language ran toward the apocalyptic, Kotlikoff and Burns were nonetheless bracingly dystopian about the facts. Knowing full well that elected officials would fail to stave off problem, the authors supplemented their policy prescriptions with personal financial advice, so that individuals could protect themselves if and when their government failed to do so. Their dire economic forecast provoked a lot of skepticism. In 2004, it was hard to imagine that the United States was heading for a major fiscal catastrophe and that demographics would be a factor. It sounded like neo-Malthusian doom saying, anathema to Americans better known for innovation and optimism. True, the dotcom bubble had burst, and the U.S. economy had taken a major hit after the terrorist attacks of 9/11. Yes, the country was embroiled in two wars. But the economic growth (and the resulting federal budget surplus) of the Clinton years was not yet a distant memory. Innovation and rapid economic growth would surely return to save the day.

Even if it did, Kotlikoff and Burns knew this would not be enough to offset the demographic time bomb of retiring baby boomers combined with longer lifespans. We could not grow our way out of the problem. Unless radical, painful, and immediate steps were taken to salvage the situation, younger Americans would face sky-high taxes, a worthless currency, and little prospect of receiving the medical or social security benefits their labor was helping to fund for their elders.

Skeptics of this bleak vision included Paul Krugman, who agreed in a lengthy New York Review of Books piece that the U.S. government had failed to manage its obligations to future generations but worried that the The Coming Generational Storm would give cover to those seeking to privatize the Social Security system. Indeed, President Bush was in the midst of just such an attempt in the wake of his re-election.

Eight years on, it’s clear that Kotlikoff and Burns were more like Cassandra than like Chicken Little. The fiscal gap has become a chasm. States including California and Wisconsin are effectively bankrupt and unable to pay the benefits owed to their own retired workers. Many such workers are eligible to retire in their mid-50s and to draw on these benefits for the rest of their lives, a prospect for which a great many states states are unprepared. Health care costs have continued to skyrocket and wages to stagnate. Federal action is stalled.

The Coming Generational Storm no longer sounds apocalyptic. The authors’ warnings of a “fiscal cliff” and “fiscal child abuse” now have wide currency. Discussion of third-rail entitlements is on the table, even during an election year. The problems Kotlikoff and Burns charted out were greatly exacerbated by the collapse of the housing market and the protracted costs of war and long-term unemployment. Kotlikoff and Burns did not, as their deservedly famous endorser Robert Shiller did, predict the bursting of the housing bubble. But in this hugely influential book, they did something equally important. They brought overdue attention to a problem that continues to darken the economic prospects of present and future American workers, and that is finally on the radar of our public officials. Whether they will address the problem is another question.


For information about the MIT Press’ history, check out our 50th anniversary page.