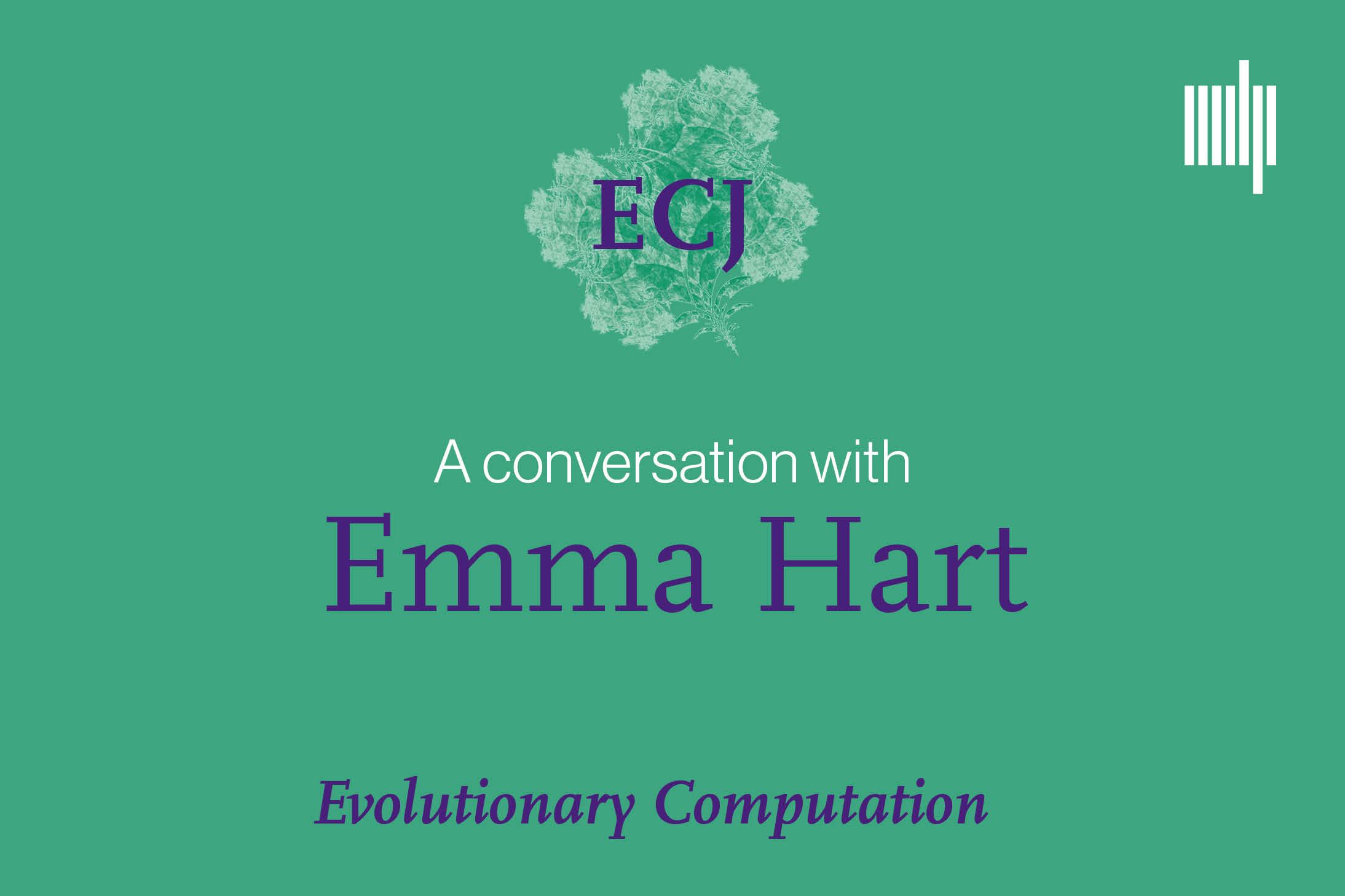 This year Evolutionary Computation, a leading journal in the field of computational systems, celebrates 30 years in publication

2022 marks 30 years of Evolutionary Computation, an MIT Press journal focusing on the theoretical and practical aspects of computational systems drawing their inspiration from nature. Since its founding in 1972, the journal has been a leader in its field, publishing scholarship with particular emphasis on evolutionary models of computation such as genetic algorithms, evolutionary strategies, classifier systems, evolutionary programming, and genetic programming.

The MIT Press: This year, Evolutionary Computation celebrates 30 years of publication. How has the journal continued to stay relevant in an ever-changing field?

Emma Hart: I think the key to staying relevant has been that the community—and the journal—has always been open to embracing new ideas from other disciplines that augment and enhance what we might think of as ‘core’ evolutionary computing. The journal has always been open to publishing different flavors of evolutionary algorithms (like genetic programming, evolution strategies, neuro-evolution) as well as approaches that hybridize evolutionary computation with methods from other fields such as machine-learning or mathematics. As well as empirical research, we also publish theory articles and application-based articles. The former is helping to build a theoretical foundation for the field while the latter describes applications of evolutionary computing to real-world problems, demonstrating the relevance of evolutionary computation outside of academia.

Evolutionary Computation has also shown a willingness to move with the times—for example, demanding more rigorous statistics and standards of reproducibility in papers as the community as a whole becomes better educated in these respects. We’ve also gradually adapted the publication process to enable authors to submit code, data, and other supplementary material to enhance their publication. Most recently, we have introduced a new type of article specifically for describing software that is beneficial to the field—creating quality open source software is a major effort in computational research fields, and an important community service. The goal of the software section is to provide a peer reviewed publication platform and to make the work easily citable in academic contexts as well as encouraging and supporting open and reproducible research.

But mainly the fact that the journal stays relevant is down to the community itself. The field has continuously grown and diversified since its inception, so it’s never been difficult to find new and interesting ideas to publish.

The MIT Press: How has Evolutionary Computation changed over the years?

Emma Hart: The field has changed rapidly. Part of this is due to advances in hardware—bigger and faster computers that enable more complex problems to be tackled and more experimentation. This is also helped by some more theoretical advances, for example in understanding representations, being able to estimate objective functions through the use of surrogate modeling to facilitate more search, and most recently through its hybridization with machine learning, for example in driving advances in automated algorithm selection and configuration. There’s also a lot of exciting work in neuro-evolution, in configuring architectures and training neural networks, where evolutionary computing has demonstrated that it can compete with other algorithms from the machine learning field.

It’s interesting to look back to the topics of the papers published during Evolutionary Computation first year and contrast this with what we published in 2021 and 2022. Back in 1993, most of the papers used the keyword “Genetic Algorithm” (as opposed to the broader term Evolutionary Algorithms), and were often concerned with aspects of fitness landscapes such as multi-modality. However, the field was already looking at applying evolutionary computing to neural-networks back then, as well as to other forms of bio-inspiration such as the immune system. Application-based papers were in evidence too, for example for circuit layout and in motion-synthesis. Fast forward 30 years and we see the majority of papers including some form of machine-learning (classification, regression, Bayesian optimization) and a strong focus on neuro-evolution, like in robotics. Genetic-programming has a strong presence, and also multi-objective—and increasingly many-objective optimization. There is also an increasing trend towards papers focusing on run-time analysis of commonly used algorithms.

The MIT Press: What are some of your editorial goals in the near future?

Emma Hart: I’m excited to share that we will be publishing a special issue in 2023 to mark the 30 year anniversary in which four of the authors who published papers in the very first issue will be contributing a paper. The authors will reflect in different ways on how the field has changed since their first publication in Evolutionary Computation in 1993. I’m also looking forward to seeing some of the first software articles published in the near future. Next year we can also look forward to a Special Issue in Reproducibility which aims to encourage research that analyzes the topic of reproducibility in evolutionary computing and showcase excellent examples of both reproducible research and reproducibility studies, edited by Manuel López-Ibáñez, Mike Preuss and Luís Paquete.

The MIT Press: What are a few publishing highlights from your years with Evolutionary Computation?

Emma Hart: Two of the papers that I’m proud to have published are in fact survey papers—one on Algorithm Selection (Kerschke, P. et. Al.) from 2019 and on neuro-evolution (Papavasiliou, E. et. Al.) in 2021. Both of these surveys cover very rapidly growing fields that are getting a lot of attention and provide an in-depth and insightful synthesis of the state-of-the-art in these fields that are very valuable to the community. I’m also interested to see the growth in papers that address machine learning and deep-learning, showing that evolutionary computation has a role here. As an example, I am going to highlight a paper from 2020, “An Evolution of Deep Convolutional Neural Networks Using Cartesian Genetic Programming” (Sugana, M. et. al.) as it relies on Cartesian Genetic Programming—a method first proposed by Julian Miller who sadly passed away earlier this year and contributed a great deal to the field.

The MIT Press: What do you look towards in the next 30 years of Evolutionary Computation?

Emma Hart: Lots of things! More papers that highlight applications of evolutionary computation in the real-world; better tools that make research more reproducible but also make evolutionary computation more accessible to the non-specialist; more integration between the evolutionary computing community and other communities, particularly machine learning—where there is considerable opportunity for combining ideas, leveraging the strengths of both fields to build better problem solvers.