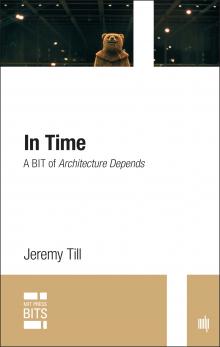 Jeremy Till wrote Architecture Depends to defend the thesis that architecture….depends. On a lot of things. On random, contingent events and unstable factors that architects have tried to ignore in the past in an effort to preserve their discipline as a pure, autonomous field that exists in a tower above the (literal) city.

The tower is literal, too. The School of Architecture at the University of Sheffield, where Till once taught, is located in the Arts Tower, a block that sits on a hill overlooking the city. Till suggests that architecture is like the occupants of this building: removed from the life of the city, disengaged from all the messy unpredictability with which it ought to be engaging if it is to remain relevant.

Architecture Depends is unique to the Press in a couple of ways. While we can’t be certain, we’re reasonably sure that it’s the only book we’ve ever published that has a bear on the cover. It’s also probably the only title to look with inspiration to Elvis Costello, who worked up his songs in the acoustically refined atmosphere of the recording studio but judged them on how they sounded when played through a lo-fi transistor radio. Our BIT selection, “In Time,” is drawn from a section of the book on “time, space, and lo-fi architecture,” where Till advises that architecture should embrace “thick time” that can respond and evolve with “the cyclic rhythms (of life, of the seasons, of the world),” and balance these against “the linear aspects (of decay, of change).” Lo-fi architecture, as one review put it, “is architecture that withstands and even celebrates existence, tinny speakers, and an inattentive audience.”

That same review, in the Times Higher Education, wonderfully sums up the book’s critical edge, and reminds us what the bear’s doing on the cover:

One of Till’s more engaging anecdotes involves an unlikely cast: Stewart Brand, author of How Buildings Learn: What Happens after They’re Built, the musician Brian Eno (brought in as intermediary) and Lord Rogers, the new Labour “starchitect” who threatened Brand with legal action because of his comments about the way Rogers’ buildings suffered over time and needed extensive upkeep. As a commentary on architects’ attitudes to time it works well, but it also tells us much about the protected status of such iconic figures. Till concludes, “It is clear that these hi-tech boys (for so they are, almost to a man) have never done the housework.”

Indeed, Till is overtly feminist, which is such a refreshing change in a field that lags so far behind the other professions in the gender stakes – even today only 13 per cent of architects are women – that I cannot conceal my delight that such things can be written, and by a member of the male sex.

The cover is extraordinarily apposite: a man in a bear suit, desperately exposed, placed at centre stage in a disorienting continuum of shiny high-tech space – comical and cuddly, yet not without teeth. This is a brave, enjoyable, affirming and important book and I actually felt sad to have finished it. I look forward to even braver sequels that include more examples of those people building within this agenda, who inhabit the interstices of Till’s argument but don’t really receive an airing in this particular book.