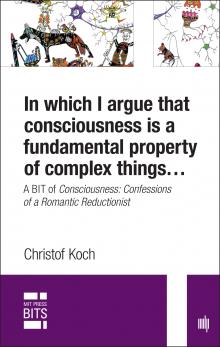 Christof Koch has devoted much of his career to bridging the seemingly unbridgeable gap between the physics of the brain and phenomenal experience. His 2012 book Consciousness represented a new and unusually personal attempt to get at these questions—part scientific overview, part memoir, part futurist speculation. Part of the story he tells about his own progress was feeling caught between two intellectual frameworks—one spiritual, the other scientific:

These two frameworks, one divine and one secular, did not intersect. The church provided meaning by placing my puny life in the context of the vastness of God’s creation and his Son’s sacrifice for humankind. Science explained facts about the actual universe I found myself in and how it came to be.

Harboring two distinct accounts… is not a serious intellectual stance.

So Koch went with science, in a big way. A lot of Koch’s research has to do with studying the brain to see what goes on when we have conscious experiences, a subject he touches on in this BIT. He addressed the broader topic of a theory of consciousness in a wonderfully accessible way in an interview with Ginger Campbell on the Brain Science Podcast after the book’s publication. It’s worth quoting at length:

Why does your liver not give rise to experience? You don’t have any sensation in your liver. Why not? It’s a biological tissue just like the brain is. You have a second brain in your gut called the ‘enteric nervous system.’ In general you don’t have any conscious sensation there. So, what is it about the brain? Your immune system is very complicated. It has memories; it remembers antibodies if you previously encountered some virus. Again, you have no conscious access to your immune system. Why not?

So, we need a general theory that tells us why do certain types of biological systems generate this thing that we call experience—conscious sensation? And which type? Is it also true for a cat, for a mouse, for a fly, for a bee, for a worm, for a paramecium? And then, of course, you can ask the more general question: other systems that are not biological in origin, but that are also pretty complex—my iPhone, my Macintosh, the Internet—can they be conscious? Are they already conscious? What would it take for them to be conscious?

So, those are more general questions that we can now begin to ask in a nonphilosophical way, where we can ask: What is it at the mathematical level that would give rise to conscious sensation? Can we make some prediction? Can we build a consciousness meter that tells us whether a patient, a person, or an animal is conscious? So, the great thing is we’re not condemned to just sort of philosophical speculation, but we can make some predictions, and then go out and measure them. And those are the things I talk about in this book.

Read more in In Which I argue that consciousness is a fundamental property of complex things…: A BIT of Consciousness.