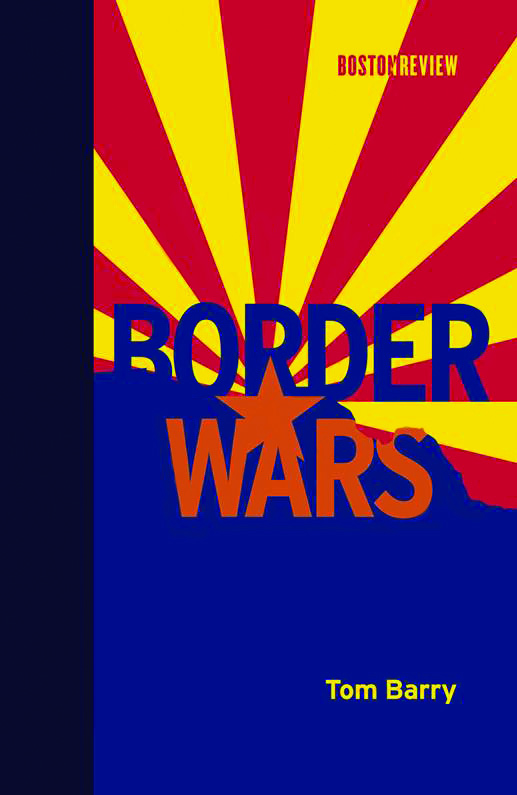 Tom Barry, author of Border Wars weighs in on immigration reform that was recently passed with bi-partisan support in the Senate, but is stalled in the House of Representatives.

You can easily miss it. The steel fence towers over the small memorial for Chris Lamadrid, who the Border Patrol shot in the back as he climbed over the 18-foot steel-pillared fence. Under the Border Patrol’s system of “threat assessment,” the 19-year old resident of the Sonora border town of Agua Prieta was considered a member of a “Transnational Criminal Organization” since he was trafficking drugs across the border.

Standing at the memorial constructed by family and friends, looking over at the U.S. homeland through the massive fence that marks the line between Agua Prieta and the small Arizona town of Douglas, is as good a place as any to reflect on the $45-billion “border surge” that is the sine que non of the Border Security, Economic Opportunity, and Immigration Modernization Act, which recently passed the Senate with the support of 13 Republican senators.

For most close observers of the border security buildup since 2001, the border surge of hundreds of miles in additional border walls, a doubling of the Border Patrol, more Predator drones, and a new splurge in high-tech ground surveillance systems is overkill.

For many borderlanders in Arizona and in southern New Mexico (where I live), border security has devolved into a joke.  Many remark here in Douglas that “there are more Border Patrol agents than ocotillos,” (spindly, orange-blossomed, cactus-like desert plants). And in the El Paso sector, which extends along the New Mexico-Chihuahua border, it is commonly noted that the “Border Patrol are tripping over one another” because there are so many of them and so few immigrants trying to come across (average immigrant haul for each agent was 3.4 immigrants last year.)

You don’t have to be a political scientist to grasp that the proposed border surge is not about border security, homeland security, or even about another escalation in the drug war. Border security is primarily about politics, along with a helpful side of pork. Since 9/11 the link between the new border security buildup and counterterrorism within the newly created Department of Homeland Security has been all but lost—except for the Border Patrol slogan about constituting the frontline against foreign terrorists.

During the 2005-2007 immigration reform debate, the term “border security” (which replaced the pre-9/11 concept of border control and regulation) became almost exclusively focused on “securing the border” against the “invasion” and “infiltration” of immigrants crossing the border illegally to seek work or reunite with family. Immigrant reform proponents acceded to the demands of more border security— including the “virtual fence,” drones, and the “Secure Border Fence”—in the hope that billions of dollars more in border security would close the deal on immigration reform.  It didn’t, predictably, because the border hawks are virulently anti-immigrant and over-the-top nationalists.

After the immigration debate faded as a political possibility, the continuing border security buildup was driven in 2008-2012 by bipartisan (albeit largely Republican with some border Democrats seeking border security pork) demands to secure the border against transnational criminal organizations, spillover violence from drug wars, and narco-terrorists in Mexico. The Obama administration acceded with an array of new border security programs and emergency spending.

Today, in the heat of the new immigration reform debate, immigrants are once again the main target of the border surge—with the threat of terrorists long forgotten (but with the rhetoric of homeland security still very much operative). Meanwhile, it goes unmentioned that more than $100 billion in border security spending over the past decade has done nothing to stop the flow of illegal drugs, mostly marijuana, into the US.

Chris Lamadrid was a U.S. citizen living in Mexico but going to Cochise College in the Douglas area. Yes, he was smuggling marijuana into a state that, along with 19 others, permits the sale of marijuana for medicinal purposes. The first memorial for Lamadrid was built on the U.S. side of the fence since he was shot in the U.S. while trying to climb back to relative safety in Agua Prieta. But the Border Patrol demanded its removal.

Lamadrid was a casualty of a border policy shaped by politically hyped threat assessments that have resulted in a military-like approach to regulating the southwest border. What now constitutes immigration policy reform—language tellingly not even found in the title of the Senate bill—is a casualty of the failure to recognize that our post-9/11 border policy is as broken, counterproductive, and tragic as immigration policy itself.