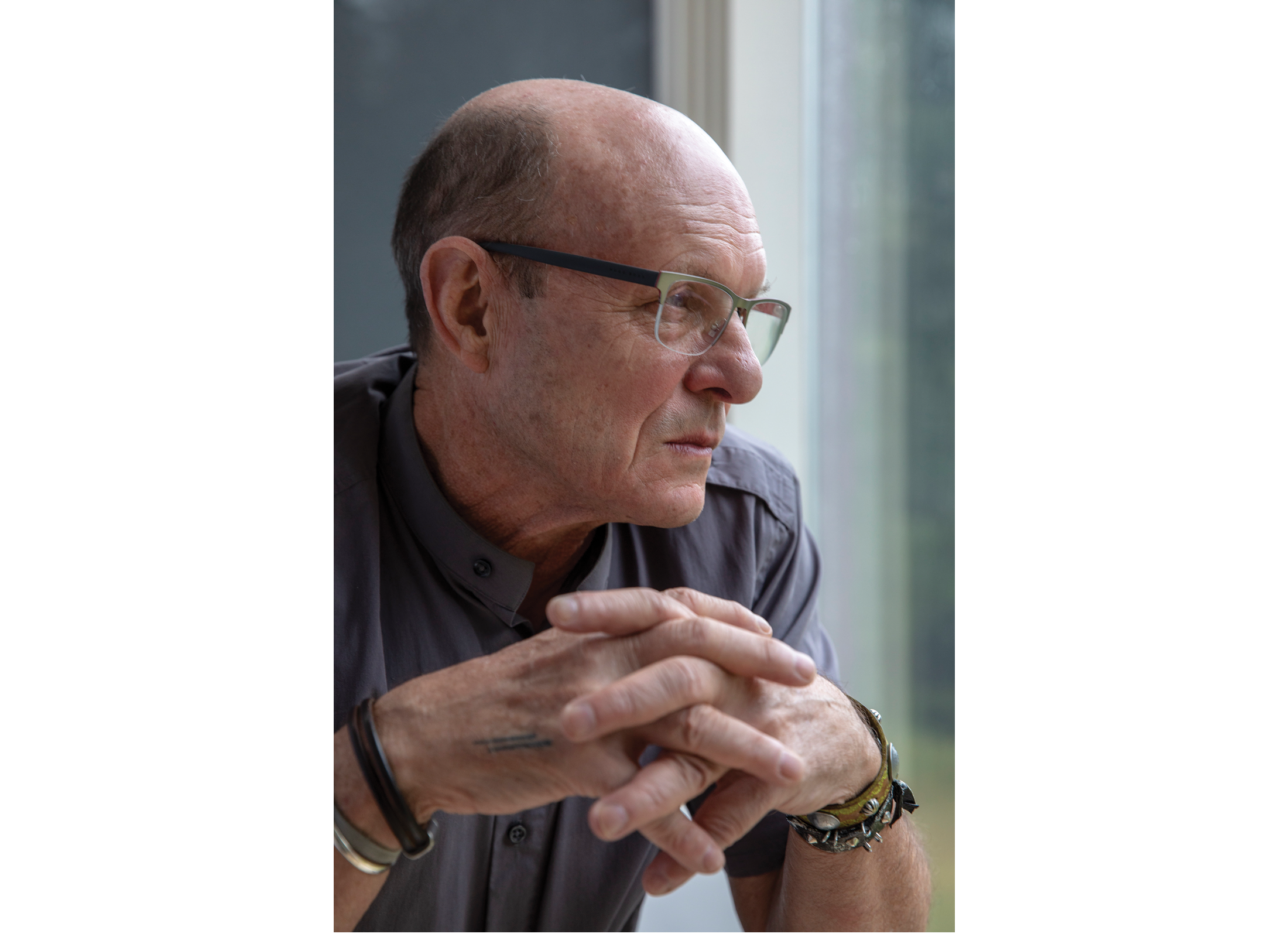 In honoring the theme of history for today during University Press Week, we look back at the incredible career of legendary Executive Editor for Art and Architecture, Roger Conover.  One of his authors, Craig Dworkin, professor in the English Department at the University of Utah, author of No Medium, and editor of Language to Cover a Page: The Early Writings of Vito Acconci, was kind enough to interview him. If there’s anyone who exemplifies this year’s theme of #TurnItUp, it’s Roger Conover.

If you stay around long enough, you become an institution by default. But if you stay around when you’ve got other things to be doing, you can become a legend. After a four-decade long tenure as Executive Editor for Art and Architecture at The MIT Press, Roger Conover is a true legend. Roger was gracious enough to entertain some questions about those decades over email.

Craig Dworkin: I wanted to start by asking how you made your way from literature to the visual arts. At the beginning of the ’70s, you were a published poet — having won an award from the Academy of American Poets and been granted a fellowship to spend time writing poetry in Ireland. In fact, you were cited by Hart Crane’s biographer, John Unterecker, as one of the promising young poets of your generation, along with Paul Muldoon and Gregory Orr. That was in 1973. You also went to graduate school in English, were a licensed lobsterfisherman, and briefly worked in theater.  But by the end of the decade you were the editor of art and architecture books for MIT Press.  How did that happen?

Roger Conover: The answer is a bit circuitous, but I’ll try my best. For two years in the early 1970s I lived in Ireland, thanks to a fellowship from the Watson Foundation: one year in Donegal, part of it spent commuting to the Yeats school in Sligo, and the second year in Dublin, where I met a number of poet-editors.  I went there to channel Yeats, but by the time I left, it was much more about Beckett and Joyce (by way of Heaney, Montague, Kinsella, Mahon). When the grant was up I bought the cheapest ticket I could find back to the States:  Dublin to Boston. I had the typical English major’s resume plus some poems published in Ireland and Wales. There weren’t many literary publishing houses in Boston, but there were a few. I sent my resume to all of them (Godine, Atlantic, Houghton-Mifflin, Little-Brown) with a cringeworthy cover letter recalling T.S. Eliot quitting his bank job to work for Faber & Faber, who in 1925 sought an editor “who combines literary gifts with business instincts”. In retrospect, I guess I can say that the only comparison is durational: we both stayed in our editorial positions for over 40 years. And that every editor makes mistakes (Eliot famously turned down Orwell’s Animal Farm, & I turned down too many good books to mention).

No publishing offers for the latest poetry arrival in Boston.  So I became a “Kelly Girl”, a.k.a. a “temporary office worker” for Kelly Services, shifting from venue to venue making an hourly wage as a typist. I had never taken an art or architecture class, but I had taken a typing class in high school, and in the long arc of chance, that had as much as anything else to do with how I got the MIT Press position. We used Selectric typewriters in those days, with those redemptive self-correction ribbons. I had once won a boys’ typewriting competition in high school. So one day I’m asked by Kelly Services to show up at a firm called The Architects’ Collaborative [TAC]. I don’t if I was told that this was the firm founded by Walter Gropius when he left the Bauhaus (which he had also founded) to teach at the Harvard Graduate School of Design, but this would not have meant anything to me at the time.  I had never taken an art or architecture class.  I typed there for a few months, then I was offered a full-time job as a writer/editor in the graphic design department. Gropius was dead by then, but Ise Gropius would make an appearance now and then, and I got to know most of the other founding principals: Norman Fletcher, John Harkness, Sarah Harkness, and Louis McMillan were all still working there then.

One day an ad appears in the Boston Globe. MIT Press was looking for an Architecture Editor. They had already published the monumental BAUHAUS book by Hans Wingler, as well as earlier books by Walter Gropius, Moholy-Nagy, Josef Albers, and Oskar Schlemmer—all Bauhaus people.  There were some MIT/TAC ties through Muriel Cooper, MIT Press’s first design director, who had designed some of those books, and through Gyorgy Kepes, who came to MIT from the New Bauhaus in Chicago and brought Muriel Cooper to MIT.  In those days, she was setting MIT Press books in Helvetica on Selectric typewriters. We met, and talked Helvetica, Selectric, and Herbert Bayer, who I knew quite well by then because he was the modernist poet Mina Loy’s son-in-law. But that’s another story.  To come to the point, I got lucky, poetry happened, and books came of it (I later published monographs on both Bayer and Cooper).

CD: With books as one common denominator, obviously, were there other continuities between what you had been doing with poetry and literature, and what you began doing with architecture (and later, art)?

RC: When I started, I knew much more about what made good writing than good art. If I didn’t know what made a building great, or a painting beautiful, at least I knew what a good sentence was. I went with that.  The manuscripts I am drawn to have always had more to do with the quality of writing than the recognition of the author or the availability of the subject. That’s probably why over half of the books I have published are by first-time authors — people who had something to say rather than people writing books to secure careers or tenure. That’s still what I look for today. This bias is probably what led to a sympathy for architectural theory and a publishing program built around architectural discourse and poetics rather than practice. I am interested in the ways that writing occupies space in the environment, that buildings occupy intellectual ground, and that art blurs into life. I love seeing the movements and unexpected events that take place within these structures:  buildings as vessels for ideas, poems as objects, art as existence.  I am more interested in architecture as a conceptual medium, a language of possibility, and a way of materializing imagination than as a strictly professional  or functional practice; the MIT Press list reflects that.

I have enjoyed exploring the continuities you mention through the visionaries, outsiders, fugitives, and imposters who have contributed so much to the history of art, architecture,  and literature even if they come from outside it. It is not an accident that MIT list is informed by writers and thinkers who were formed by Pataphysics, Dimensionism,  Dadaism, Situationism, the Independent Group, the Sex Pistols, Black Mountain College, and Psychedelics, as well as from Buffalo, Halifax, Ljubljana, Bucharest, Laos, and Lagos. Like Guy Debord said, “we have to multiply poetic subjects and objects, and we have to organize games of these poetic objects among these poetic subjects.”

In response to your question, I also want to say that the work of publishers like Dick Higgins, Gérard Lebovici, Seth Siegelaub, and Jonathan Williams — those 4 in particular — was tremendously influential. They all transected fields and occupied margins in ways that should not be forgotten.

CD: Part of your legacy at MIT has been to reframe certain genres of writing, and in some cases poetry specifically, as art practices — as analogues to sculpture and painting and performance. Do you think of your work as “literary” editing?

RC: Some curators work for museums, some for artists. Some editors work for publishers, others for writers. I never considered myself working in service of either.  I loved publishing the poems of Claude Cahun, the Baroness Elsa von Freytag-Loringhoven, John Hejduk, Roger Connah, Frank O’Hara, Francis Picabia, etc., but I knew this was not my job.

CD: Thank you for taking the time to talk. Anyone who has edited almost 1500 books is used to doing a lot of things at once, and I know that one of things you’ll be juggling is continued work on the poet/boxer/provocateur Arthur Cravan, who vanished without a trace in 1918. I’ve always thought that you share a lot with Cravan — given his outsider sensibility, literary acumen, and pugilistic wit — but it’s good to know that unlike him you won’t be vanishing.