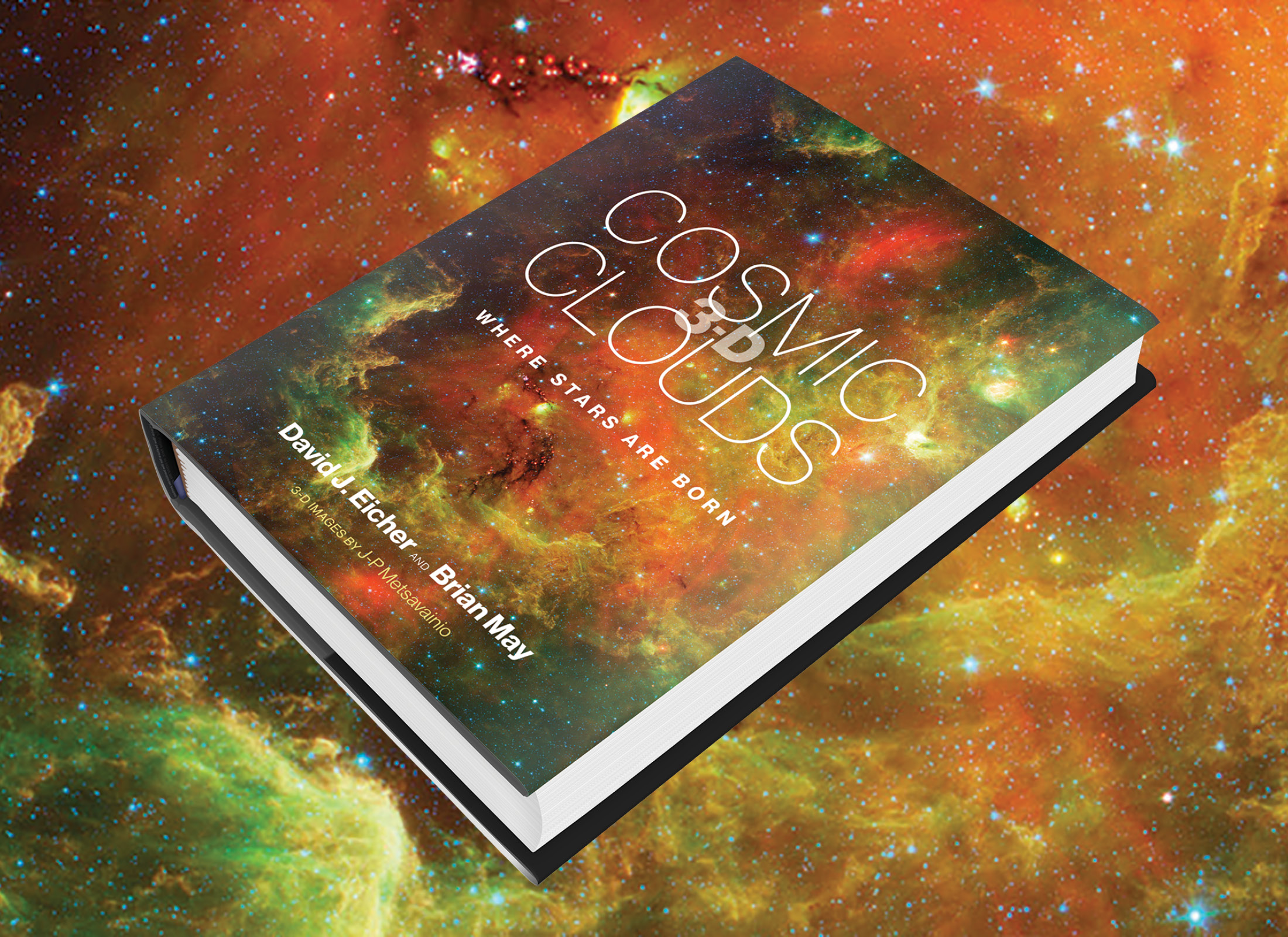 An excerpt from Cosmic Clouds 3-D, the new book from Queen’s Brian May and David Eicher showcasing amazing 3-D images that take readers inside the birth and death of stars

Over the years I have learned that great things often come from bringing great people together. I think this book is a good example. This up–to–the–minute exposition of the workings of nebulae, illustrated with highly authentic side–by–side stereographs as well as some of the latest mono nebular astrophotography, is the result of a unique assembly of talent. The original London Stereoscopic (or, initially, “Stereoscope”) Company (LSC) was born in 1854, dedicated to purveying high-quality stereoscopy to the public. Stereoscopic photography, alongside photography itself, was new and exploding as a Victorian craze. The LSC’s motto was “No home without a Stereoscope”, and indeed it came close to achieving that in the 1850s in England, its London shops boasting a million stereoviews for sale by 1858. It survived until it was wound up around 1930 – impressive innings that outlasted two golden eras of stereoscopic photography.

In 2003, with some help from my friends, I began to rebuild the LSC based on nothing but the ashes of the original company and a reborn spirit – belief in the magic of what had by then become known as “3–D”. The aim was to bring Victorian stereoscopy, still unsurpassed, renewed using modern techniques, into the 21st century. The LSC is now a small but gradually growing team of people who are all dedicated to excellence in stereoscopy for its own sake. This will be the seventh book we have published. All of our works have been milestones in some way, and this is no exception.

This is the first-ever stereoscopically illustrated book dedicated to the study of the vast array of nebulae now known to inhabit our Milky Way galaxy (plus a couple beyond its limits). Many of these huge clouds of gas and dust are the birthplaces of stars – incandescent orbs which in many cases will end their own lives creating new nebulous areas, in the vast spaces where atoms are constantly being transformed and recycled. Once we realize that the very molecules in our own bodies are part of this huge cosmic drama, it becomes clear that this is something we all need to know about.

Ohio-born David J. Eicher – long time Editor–in–Chief of Astronomy– is an expert in the life and death of nebulae; he was the perfect author of choice to tell this story in words we can all understand. Finnish luminary J.P. Metsävainio is the only man on Earth to have assembled a whole encyclopedia of stereoscopic images of nebulae, based on his own astrophotography. I’m proud to have brought Eicher and Metsävainio together – two unique talents collaborating for the first time. And, as with all great events, in retrospect, it’s apparent that this book couldn’t have happened any other way. Behind the text and images are the now experienced team of the LSC, with all the passion for exquisite detail and for breaking new ground that they bring.

The stereoscopic pairs in this book are revolutionary. To create a stereoscopic pair of images which will deliver depth perception in a photographic view, we normally need two separate viewpoints, corresponding to the positions, side by side, of our own eyes. If we are capturing a flower close–up in 3D, the separation of those two viewpoints, known as the ‘baseline’ of the stereo, will be just a centimeter or two (around an inch) This will be enough to give us the slight differences, known as “parallax”, between the two images captured, which will enable our eyes and brain to reconstruct the view in true depth when we view this pair of pictures in a stereoscope.

If we are making a stereo portrait of a person, or a landscape with some distinct foreground detail, the baseline can be the same as the actual distance between our eyes (about 2½ inches, or 7 cm). But how do we capture true stereo information in objects much further away? Capturing cityscapes from a high building, we may find that we get an excellent “hyper stereo“ effect by extending our baseline to several meters – I have used up to 50 feet to good effect from the observation deck of the World Trade Center building. Moving out into space, we can achieve suitable baselines of effectively hundreds of thousands of miles, simply by waiting for planets and moons to rotate. But if we move to cosmic scales beyond this, it gets tricky. The New Horizons Mission probe, currently over 7,000,000,000 kilometers (about 4,500,000,000 miles) away from the Earth after sensationally passing Pluto and a Kuiper Belt Object at close quarters, is JUST far enough away to make it possible to achieve a baseline long enough to see instantaneous parallax in nearby stars. This is an experiment that this innovative NASA team will be attempting in the near future for the first time. But the nebulae we will come to know in this book are beyond the reach of any such technique. They are simply too far away. How, then, can we make informative and beautiful stereos of them? Mr. Metsävainio has developed his own unique methods. First, he photographs the area in question himself, obtaining a high-resolution color image that necessarily appears “flat” because it is so distant. He then applies current knowledge of the distances of every part of the nebula. From this, he constructs a depth map, which he then uses to create a second image in which the required differential parallaxes have been applied, modifying the image laterally. The result is a magical transformation of a flat view into a completely astrophysically informed three–dimensional view. The effect is way beyond astonishing! In fact, these images radically transform our mental appreciation of these objects. What appears in every other astronomical image seen in books as a flat ring of smoke suddenly becomes appreciable as a three–dimensional transparent sphere. Dark patches which look, in flat images, as if they might be holes in the bright parts of the nebula, are now unmistakably revealed to be the result of dark material between us and the illuminated gas and dust behind. In short, these images, never seen before in print, are revelations. It has often been said that a picture is worth 1,000 words. If this is true, a stereoscopic picture must be worth at least 100,000! Luckily in this book, we have all three – superlative stereoscopic pictures from Mr. Metsävainio, flat pictures from the greatest astrophotographers and telescopes in the world (and just outside!), and a magnificent text from Mr. Eicher, one of the world’s top experts in the field.

Before you begin reading, please retrieve and deploy your OWL stereoscope, included in the back of this package. If you’re not already familiar with stereoscopes, taking a moment to read the instructions may change your life! And certainly, take you on a new journey into space.

Brian May is a founding member of Queen, a world-renowned guitarist, songwriter, producer, and performer, also a Doctor of Astrophysics, 3-D stereoscopic photographic authority, and a passionate advocate and campaigner for animal rights.

David J. Eicher is editor of Astronomy Magazine and author, coauthor, or editor of twenty-one books on science and American history.

Excerpted from Cosmic Clouds 3-D: Where Stars Are Born by David J. Eicher and Brian May, Copyright 2020. Reprinted with permission from The MIT Press.