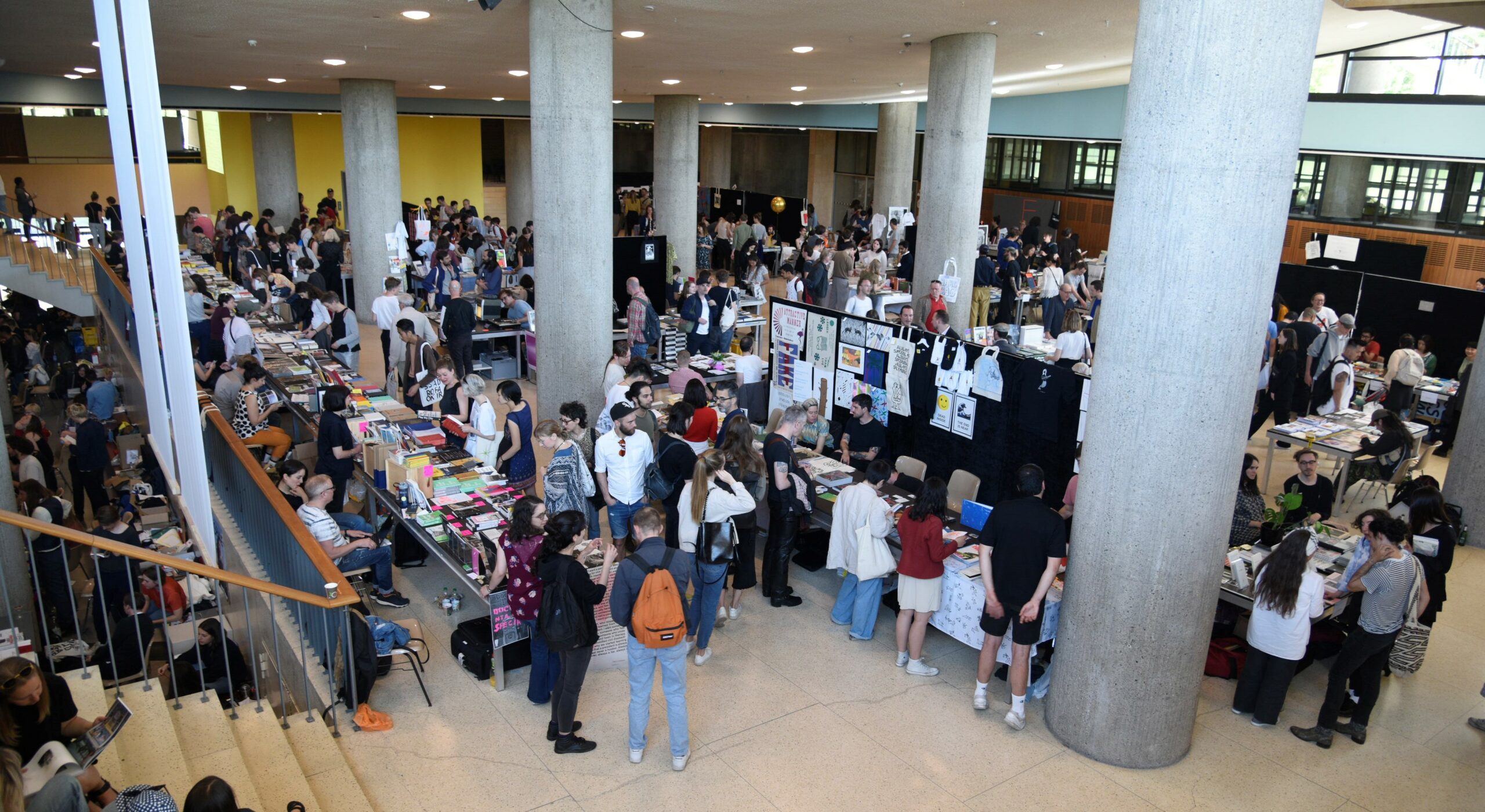 Even if the buzz of interest in publication as an art practice around the turn of the twenty-first century resembles the hype around the “artist’s book” in the 1970s, the phenomenon of art book fairs in this quantity and intensity is something new. Since 2006 or so, independent art book fairs have been spreading like mushrooms. Every time you turn around, a new book fair has been founded. The way these fairs function is significantly different from the institutions (initially bookstores, and later archives) that emerged in the 1970s, such as Other Books and So, Printed Matter, Inc., Art Metropole, Zona Archive, Franklin Furnace, Archive for Small Press & Communication, Artpool Archive, and others.

Art book fairs today are not only a venue for representing a separate, prior publishing scene, they are also a central forum for constituting and nurturing a community around publishing as artistic practice. A global phenomenon, these communities take the form of agile, adaptable, and wide-ranging networks. Miss Read in Berlin—and other comparable events in New York, Tokyo, Mexico City, Tehran, Moscow, London, Leipzig and elsewhere around the globe—are culmination points of dispersed activities: periodically recurring meeting places in real time and real space, where people travel to gather together. One could say that art book fairs today serve the function of marketplaces, but not primarily in the economic sense; rather, they are marketplaces in the sense of the ancient agora: a physical place accessible to the common public, and a public sphere for negotiation and exchange.

It remains questionable how far these events reach beyond their own primary demographic to involve communities beyond the upper and middle classes. However, the entrance barriers are, relatively, rather low. No gallery backup is needed. There are artists who have participated in numerous book fairs and whose works and ideas circulate without ever having worked with commercial galleries and hence never shown at art fairs.

Art book fairs constitute their own global art circuit even though they are not as economically sustainable as the more profitable art fairs. When book fair exhibitors talk about “breaking even,” they usually mean that they covered the table fee, perhaps travel expenses, and—if it went well—accommodation expenses; but they often neglect to take into account the production cost of the publications on display, much less the time and labor spent working at the fair. The economics, indeed, are rather precarious and often euphemistically called gift economies.

“A further caution,” as Michael Baers warns, “would concern the way critical art’s resistance to cooptation has been eroded. […] In fact, the culture industry has proved quite adept at assimilating any insurgent notions artists might entertain.”[1] The role of book fairs is thus somewhat a paradox, oscillating between creating open spaces for critical debates on the one hand and being primary examples of neoliberal event-driven culture on the other hand. At the same time, larger art fairs have been increasingly eager to embrace book-fair sections under their roofs as a sort of intellectual fig-leaf, while museums have come to welcome the visitors and energy that such fairs bring with them.

Miss Read initially came about when the KW Institute for Contemporary Art, Argobooks, and I (an institution, a publisher, and an artist, respectively) joined forces in 2009. KW stayed involved as a host for three years. The fair grew rapidly and, or so it seems, the scene around it, likewise. In 2014 we drew a Caucasian Chalk Circle, and since 2015, when Yaiza Camps and Moritz Grünke joined the core-team, Miss Read is artist-run.

From the start in 2009, however, it had an egalitarian and an inclusive approach. It was important to us that everybody has the same table size, whether they were a micropress zine or a large established publisher like the Verlag der Buchhandlung Walther König, or the MIT Press, for that matter. Moreover, we kept the table cost close to nothing. This inclusive approach extended to the audience as well, meaning that barriers to entry were absent both in economic terms (free admission) and in architectural terms (no fences and wheel-chair-accessible). One driving incentive, to be sure, was to create and co-create a context for one’s own work, but also for other people. It took a few years to realize that this was necessary—and possible. Something similar could be said about the book Publishing Manifestos.

“Once you busy yourself with art, you will always fall from one catalogue to the next,” Marcel Broodthaers once said,[2] lamenting the lost potential for pursuing other kinds of publications. The same is true, alas, for book fairs.

Publishing Manifestos, in a sort of beta version, first came about in 2018 when the Miss Read team had become increasingly bored with the usual book fair catalogs that we, like most other fairs, kept producing every year. There had been attempts to play with the genre of “the catalog,” for instance, by running artistic or literary texts—or what Seth Siegelaub would term primary information—through Miss Read catalogs.[3] The footnotes seemed to be an obvious choice for creating a subtext. These interventions seem to have gone unnoticed, but that’s fine with us; they were a way to subvert the status of the publication a bit, and an attempt to turn it into a hybrid between exhibition catalog and catalog exhibition, providing a platform for a parasitic literary work, a clandestine B channel, an echo.

[3] In 2011, the German artist Achim Lengerer had already created column titles as an intervention in the catalog, which were comprised of excerpts from Ästhetik des Widerstands (Esthetics of Resistance) by Peter Weiss. In 2016, Cia Rinne inserted footnotes comprised of her missing notes from notes for soloists, and in 2017 Simon Morris supplied footnotes from his book Re­Writing Freud; in 2018 Elisabeth Tonnard included The Bird, an adapted chapter of her book They Were Like Poetry. These authors have also presented their work at Conceptual Poetics Day, an annual event that explores the imaginary border between visual art and literature.