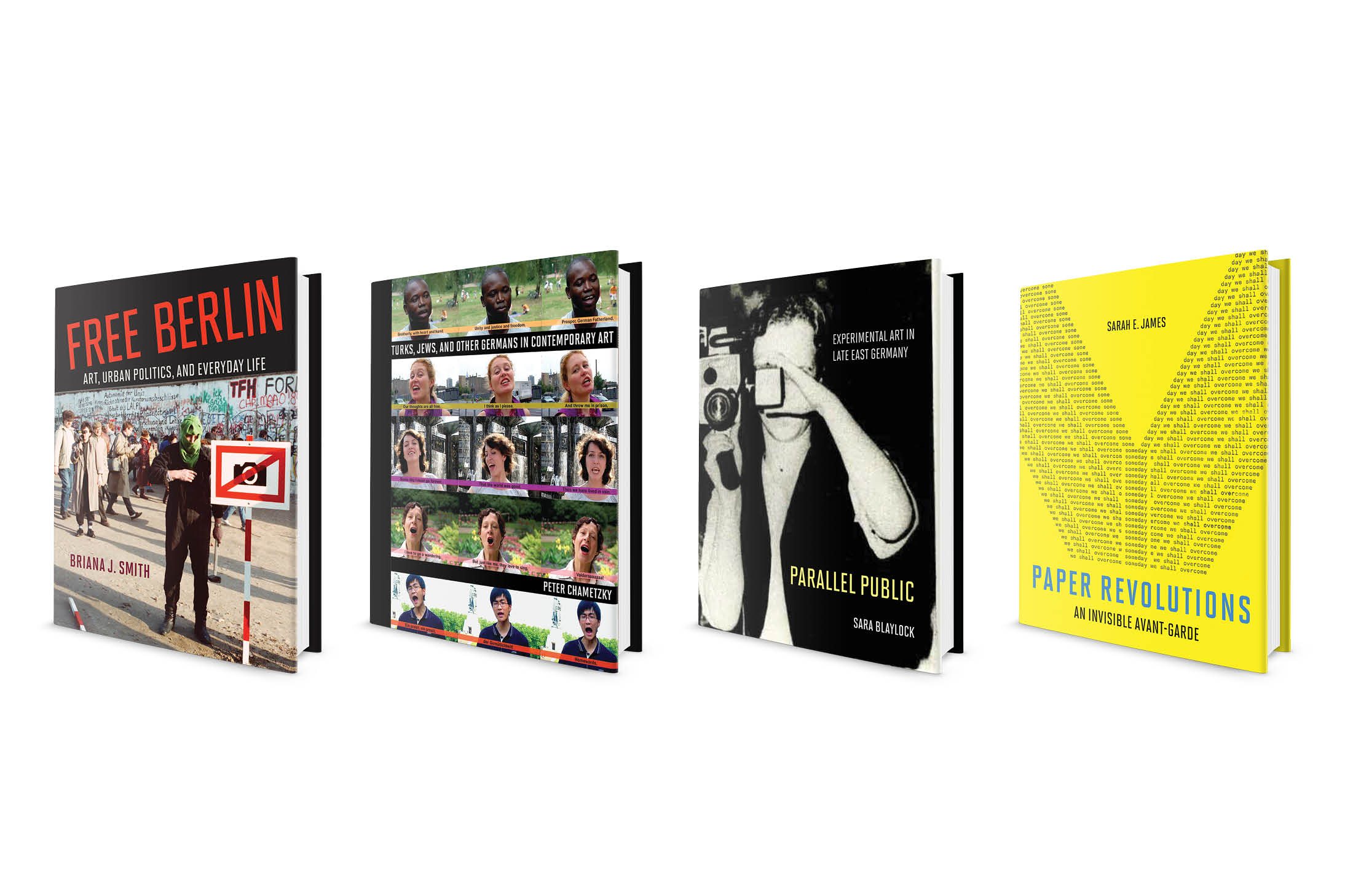 Berlin is a city with a unique legacy, serving as a central pivot point of the Cold War and a place of major division for much of the late twentieth century. With political turmoil as a backdrop, experimental and modern art found a home within artist communities in the city and in Germany at large.

Explore these four recent MIT Press books on the topics of art, visual culture, and politics in Berlin in the twentieth century below—and the legacy of these artists in the city today.

In pre- and post-reunification Berlin, socially engaged artists championed collective art making and creativity over individual advancement, transforming urban space and civic life in the process. During the Cold War, the city’s state of exception invited artists on both sides of the Wall to detour from artistic tradition; post-Wall, art became a tool of resistance against the orthodoxy of economic growth. In Free Berlin, Briana Smith explores the everyday peculiarities, collective joys, and grassroots provocations of experimental artists in late Cold War Berlin and their legacy in today’s city.

“In Free Berlin, Smith shows vividly what has made dour Berlin twinkle: the offbeat creatives who dared to live out their eccentricities on its streets and in the drafty walkups—not for money but because this is who they had to be, and Berlin was the best place to be it.” —Paul Hockenos, author of Berlin Calling

Turks, Jews, and Other Germans in Contemporary Art by Peter Chametzky

With Turks, Jews, and Other Germans in Contemporary Art, Peter Chametzky presents a view of visual culture in Germany that leaves behind the usual suspects—those artists who dominate discussions of contemporary German art, including Gerhard Richter, Anselm Kiefer, and Rosemarie Trockel—and instead turns to those artists not as well known outside Germany, including Maziar Moradi, Hito Steyerl, and Tanya Ury. In this first book-length examination of Germany’s multicultural art scene, Chametzky explores the work of more than thirty German artists who are (among other ethnicities) Turkish, Jewish, Arab, Asian, Iranian, Sinti and Roma, Balkan, and Afro-German.

“Chametzky’s is a welcome call to question racialized definitions of ‘Germanness’ and, ultimately, to redefine our surprisingly stagnant understanding of what constitutes German art today.” —Lynette Roth, Daimler Curator of the Busch-Reisinger Museum, Harvard Art Museums

“Sara Blaylock’s pioneering book moves beyond the idea that art in the GDR was monolithic, isolated, or secretive. Instead of merely reacting to state power, the performance-based artworks presented in this highly readable study suggest forms of being and working together that echo the ethical and political commitments that once, long ago, accompanied the GDR’s foundation.” —Sven Spieker, University of California, Santa Barbara

“Paper Revolutions brings us a much-needed scholarly account of fiercely original but little known ‘avant-garde’ art made under socialism, including work by Hermann Glöckner and Ruth Wolf-Rehfeldt.” —Christine Mehring, University of Chicago