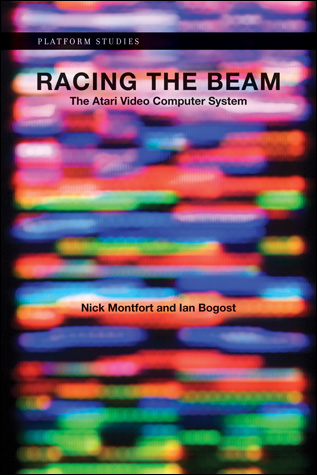 Happy 35th Birthday, Atari! Here’s a toast (in the form of an excerpt) from Nick Montfort and Ian Bogost’s Racing the Beam.

Although it was not the first home videogame console, the Atari VCS was the first wildly popular one. It was affordable at the time, and it offered the flexibility of interchangeable cartridges. The popularity of the Atari VCS–which was the dominant system for years and remained widely used for more than a decade–supported the creation of nearly one thousand games, many of which established techniques, mechanics, or entire genres that continue to thrive today on much more technologically advanced platforms. Although several companies fielded consoles, by 1981 the Atari VCS accounted for 75 percent of home videogame system sales. Indeed, the generic term for a videogame system in the early 1980’s was ‘an Atari.’

…Obviously, the Atari VCS is a cherished relic. Although no longer manufactured in its original form, it remains a living fossil. An article in Time in 2001 described the console’s continued life after the turn of the century: “At ’80s-themed parties it’s common to see a 2600 wired to the TV set and guests jumping at the chance to rediscover their first video game experience.” The VCS consoles have continued to come out to play, for instance, for celebrations of the thirtieth anniversary of the release of the system in late 2007. Just as a practice like letterpress printing is a contemporary, ongoing activity in addition to being the dominant method of printing from times past, the Atari VCS is admirable for its historical role in video gaming while it remains playable and programmable today.

On a related note, check out this Atari commercial from 1978: