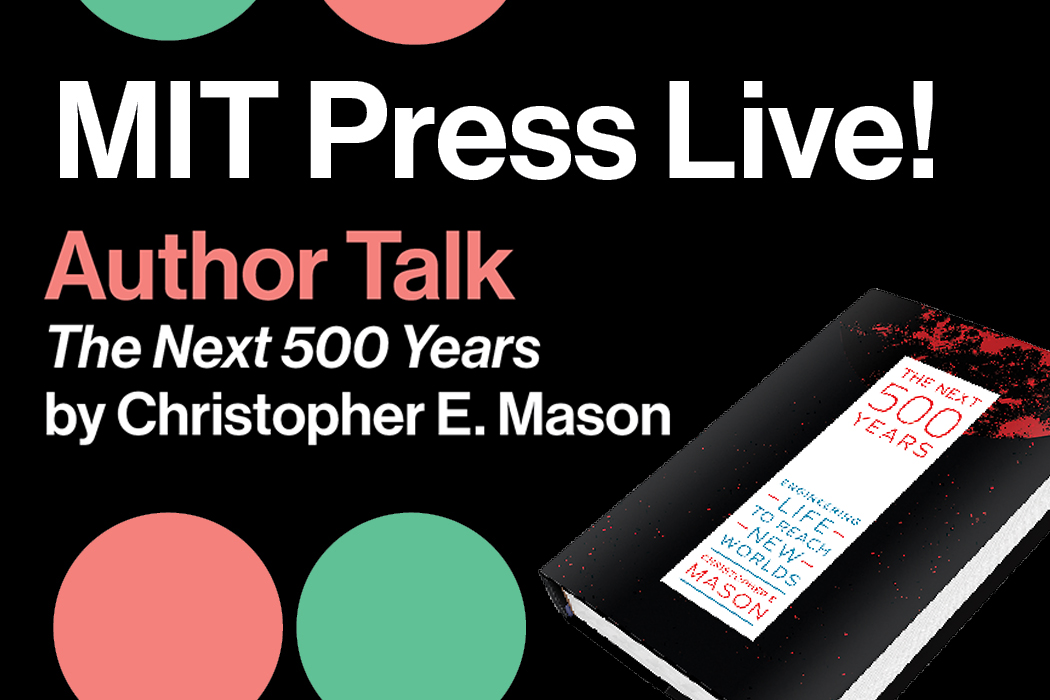 MIT Press Live! presents an author talk with Christopher E. Mason, author of The Next 500 Years

About The Next 500 Years

Inevitably, life on Earth will come to an end, whether by climate disaster, cataclysmic war, or the death of the sun in a few billion years. To avoid extinction, we will have to find a new home planet, perhaps even a new solar system, to inhabit. In the provocative and fascinating The Next 500 Years, Christopher Mason argues that we have a moral duty to do just that. As the only species aware that life on Earth has an expiration date, we have a responsibility to act as the shepherd of life-forms—not only for our species but for all species on which we depend and for those still to come (by accidental or designed evolution). Mason argues that the same capacity for ingenuity that has enabled us to build rockets and land on other planets can be applied to redesigning biology so that we can sustainably inhabit those planets. And he lays out a 500-year plan for undertaking the massively ambitious project of reengineering human genetics for life on other worlds.

As they are today, our frail human bodies could never survive travel to another habitable planet. Mason describes the toll that long-term space travel took on astronaut Scott Kelly, who returned from a year on the International Space Station with changes to his blood, bones, and genes. Mason proposes a ten-phase, 500-year program that would engineer the genome so that humans can tolerate the extreme environments of outer space—with the ultimate goal of achieving human settlement of new solar systems. He lays out a roadmap of which solar systems to visit first, and merges biotechnology, philosophy, and genetics to offer an unparalleled vision of the universe to come.

“Readers looking for science writing that sees bold possibilities in the future will be enthralled.”
—Publishers Weekly

Christopher E. Mason is a geneticist and computational biologist who has been a Principal Investigator and Co-investigator of seven NASA missions and projects. He is Associate Professor at Weill Cornell Medicine, with affiliate appointments at the Meyer Cancer Center, Memorial Sloan Kettering Cancer Center, the Information Society Project (ISP) at Yale Law School, and the Consortium for Space Genetics at Harvard Medical School.

Check out Mason in TEDMED and StarTalk Radio.