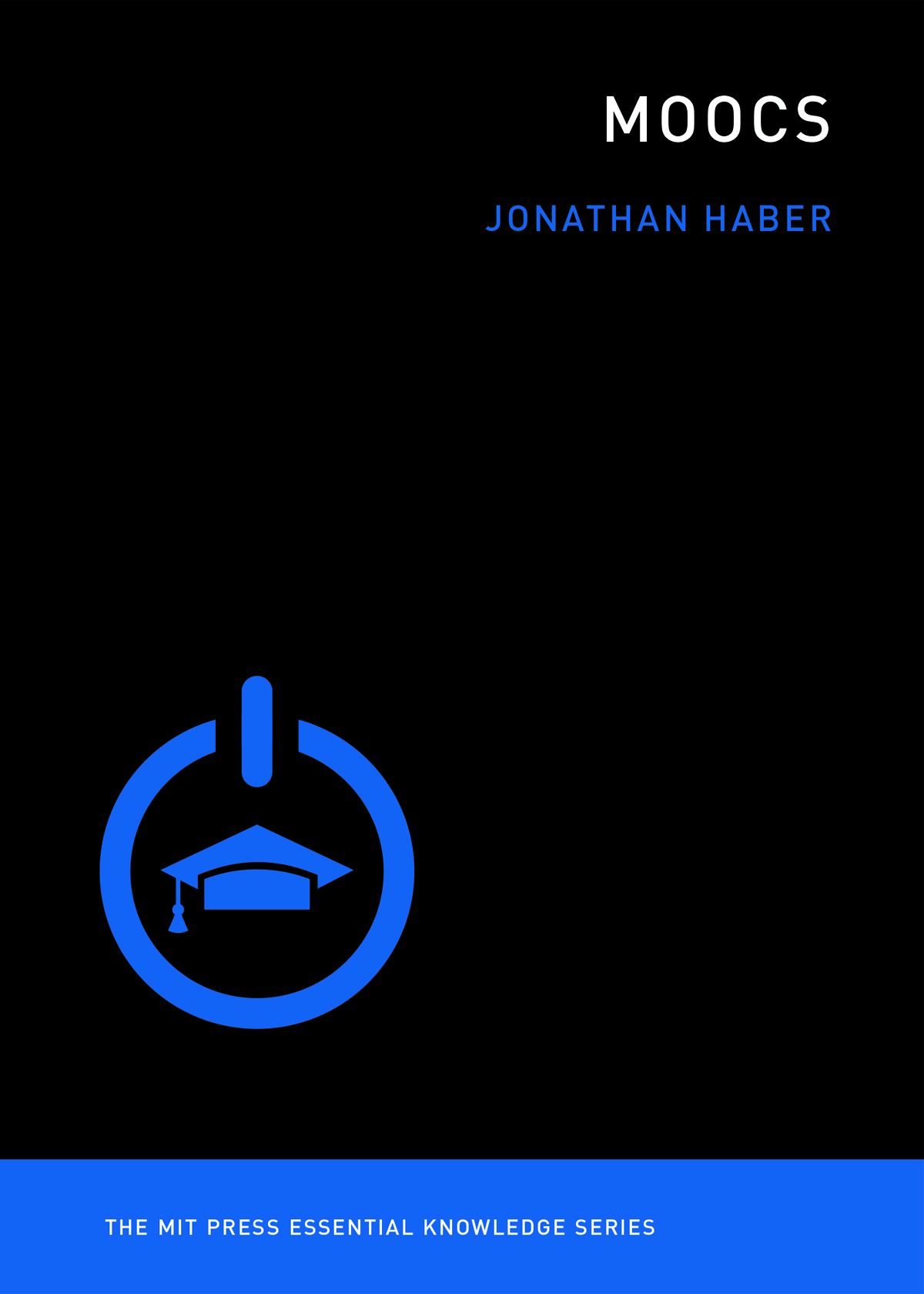 Yesterday we started our “Back-to-School” series looking at Connected Code by Yasmin Kafai and Quinn Burke who argue in their book that every child should learn to code. For today’s post, Jonathan Haber, the author of upcoming Essential Knowledge book titled MOOCs, writes about his experience taking MOOCs (Massive Open Online Courses). Read below for some of his insight on the controversial subject.

As someone who has taken several MOOCs, what are your overall thoughts about them?

My year-long Degree of Freedom project involved taking enough MOOCs and other free-learning courses to match the distribution and major requirements of a four-year BA program.  This required not just sampling a few MOOCs but taking several dozen of them to completion and treating each with the same seriousness one would treat a live college course.

It was through this process that I came to understand that not all MOOCs are created to accomplish the same educational goal.  For example, some MOOCs try to replicate an existing college course by including as much syllabus material from a live residential course as the technology allows, while others were designed to introduce students to a topic by teaching a subset of what might be included in a full semester class.

And just as MOOCs vary from one to another, the components within a MOOC can also vary.  For example, I noticed a great deal of interesting experimentation with lecture videos during my One Year BA experience, with sage-on-stage talking heads giving way to group conversations, live interviews and location shoots.  This helped make video lectures one of the liveliest and – ironically – most intimate components of a course.   At the same time, other course components – notably assessments and discussion – demonstrated current limitations of trying to learn alongside thousands of other students.

Why are MOOCs considered a “disruptive” technology?

A year or two ago, when the world’s most well-known colleges and universities were falling all over each other to offer free versions of their most popular courses and millions were signing up to take them, a storyline emerged in the educational and popular press that claimed MOOCs were major disruptor about to shake the Ivory Tower to its foundations.

With a bit more perspective, it’s pretty clear MOOCs are not immanent replacements for traditional residential and online degree programs.  For example, with more data available regarding who is taking MOOC classes, we now know that the majority of enrollees are older and already have a BA or advanced degree.  That still means there are thousands of college age (and even high-school age) students taking MOOCs, but on the few occasions when options were available to turn that experience into college credit, undergraduate-age students showed almost no interest in doing so (meaning they were taking those courses for reasons other than as a replacement for a traditional undergraduate experience).

“Disruption Theory,” popularized by Harvard’s Clayton Christensen and his colleagues, holds that disruption occurs when a new (and potentially inferior) technology takes hold and rapidly evolves within an unserved or underserved market – personal computers disrupting mini- and mainframe computer manufacturers being the iconic example of this phenomenon.   But given where and how MOOCs are being used, it’s not clear that they have found a major (and potentially paying) underserved market comparable to home users that fueled the growth in PCs.  Which means MOOCs might represent more of an incremental technology that will evolve steadily as part of other technological and pedagogical trends already underway in both K-12 and higher education.

What are some of the criticisms of MOOCs?

Harsh critics who emerged during a backlash against MOOCs in 2013 focused on high drop-out rates, sometimes topping 95%.  But now that we know more about what students do beyond enrolling in a MOOC and either completing it or not, it’s clear that both the huge enrollments touted by MOOC enthusiasts and high drop-out rates fixated on by critics are misleading numbers which don’t take into account the range of motivations for MOOC students, some of which (such as auditing) provide educational value – even to those who do not earn a certificate.

Beyond the numbers, many educators question the value of classes where thousands of unseen students are only interacting with a professor via the one-way medium of video, where measurement of knowledge is performed through automated assessment (often via multiple-choice testing that professors tend not to use in the classroom), and where students have limited means to interact with one another.  These are all reasonable concerns, which is why features such as assessment and evaluation (including test security) and community formation beyond discussion forums represent the next frontier for MOOC development.

Finally, you had political concerns that state or community colleges might replace professors with recordings of Ivy League lecturers, a criticism that has become muted now that it is clear MOOCs are not on the verge of turning the academy upside down tomorrow.

What are your thoughts (and perhaps, predictions) on the future of MOOCs?

I tend to think of the future in the context of three audiences for MOOC-based education.

First, you’ve got traditional undergraduates (18-22 year olds) currently taking MOOCs for their own edification.  For this group, I can see MOOCs eventually joining other alternatives for obtaining college credit such as AP, credit-by-exam (such as CLEP), exchange and Gap Year programs, especially if colleges and universities continue to show more flexibility regarding where the credit needed to graduate can originate.

For older learners – the bulk of today’s MOOC students – MOOCs have demonstrated that millions of people have decided that their education does not need to end once they are handed a diploma at age 22.  To take one example, for my One Year BA I tried to replicate the learning experience of an undergraduate majoring in philosophy.  Before MOOCs, my options were going back to school as an undergrad (no thanks), trying to get into a philosophy grad program I wasn’t prepared for, or reading books.  MOOCs provided a new, effective, and cost-free option to have that structured undergraduate learning experience on my own terms and at no cost. In a similar way, I can see MOOCs continue to redefine when college-level learning can take place in people’s lives.

Finally, in the developing world (as well as struggling regions in the developed world) MOOCs are seen as a Godsend, not a poor substitute for four years at Cornell. In countries like Nigeria, Rwanda and Pakistan, on-the-ground educators are integrating MOOCs into classroom experiences, inventing solutions that fill the gaps missing in current MOOC offerings. And as those creative solutions begin to get re-imported into countries like the US, I anticipate that this is where true disruption of the traditional academy might originate.