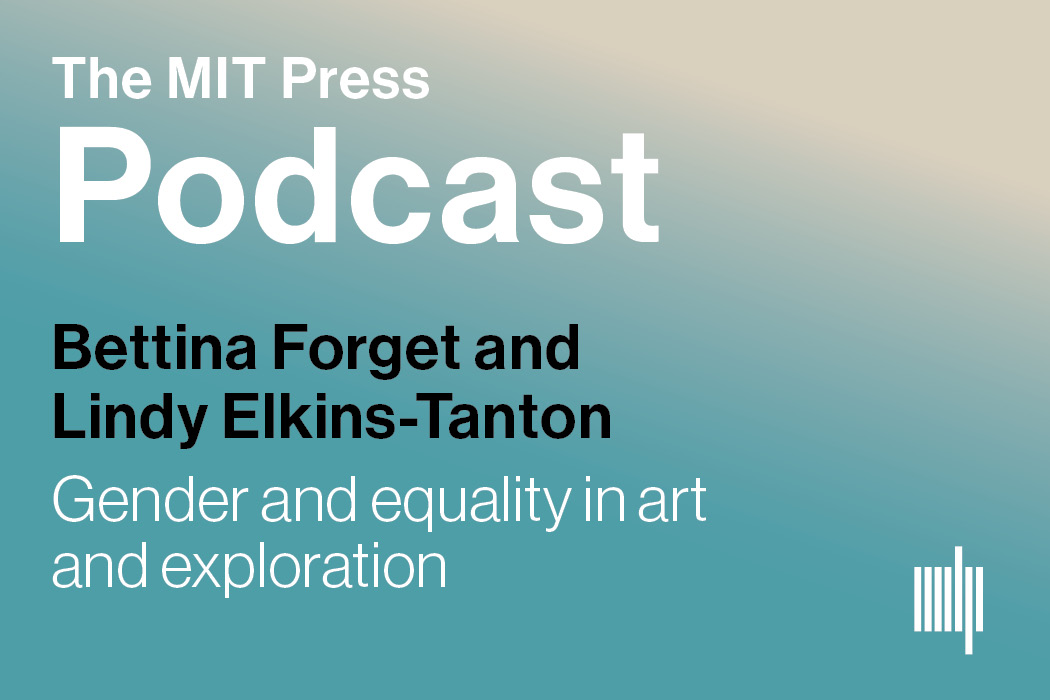 This episode, hosted by Erica Hruby, features a conversation between two authors published in the Leonardo special issue “Cosmos and Chaos:” Bettina Forget and Lindy Elkins-Tanton. Listen to the episode and read along with the transcript below as these authors discuss the connection between art and science, the flawed idea of the hero, exploration of both land and space, and the complexities of being a woman in male-dominated fields.

Erica Hruby: We are going to introduce Bettina Forget and Lindy Elkins-Tanton. Bettina Forget’s contribution to the special issue is “Women With Impact: Taking One Small Step into the Universe.” Bettina Forget is an artist, educator and researcher. She is the director of the SETI Institute’s Artist-in-Residence Program in Mountain View, California, and director of Visual Voice Gallery in Montreal, Canada. Lindy Elkins-Tanton wrote “The “Frozen, Darkened Soul” Rises into Space: Travels in Siberia and the Plight of Life on Earth,” which is the end note to our special issue. Lindy is the principal investigator of the NASA Psyche mission, managing director of the Interplanetary Initiative at Arizona State University, and cofounder of Beagle Learning, a tech company providing training in and measuring collaborative problem-solving and critical thinking. Welcome, Lindy and Bettina.

Bettina Forget: Thank you. Hello everyone. And thank you for including me in this phenomenal panel. My head is buzzing with all these ideas and thoughts that we’ve already discussed in this time here. And thank you for pairing me with Lindy. When I first saw what she does, I thought, “Oh, scientists.” I have an art background; how is it going to work? But we have so many connection points between our two articles. It was really fascinating. Lindy, I really loved your article and enjoyed reading it. I mean, just the title—the “Frozen, Darkened Soul,” right? It’s so poetic. You allude to the importance of connecting art and science, and your writing is already art. I was reminded of Alexander von Humboldt, who did these really evocative narratives of his travels to faraway places that seemed very foreign and other-worldly at his time. He learned from Goerte to color his narrative with modern scientific fact—and I found that your article does that.

Lindy Elkins-Tanton: I might just faint right now to be compared with Alexander Von Humboldt. He’s such a hero.

Bettina Forget: I think to both of us, right? He also drew a lot from the arts, and so does your writing.

Lindy Elkins-Tanton: I was so thrilled when we were paired because when I read your article, I saw so much art and so much science together. I deflect the notion that arts and science are really disparate things. They’re just ways that all of us humans are trying to apprehend our world.

Bettina Forget: Yes, and I think these are such artificial boundaries—the view that we have of ourselves and our capabilities and the capabilities of others. What we really need to do is follow our own thoughts and our own passions, which you do. I love how you described your field work: being in Siberia, the experience, the view of the landscape. There’s this quote that I picked out—you described “the vast wilderness felt too big to fit into the Earth I knew.” That was just so lovely.

I’d like you to talk about what it was like for you to be doing field work. As a woman in Russia, your narrative is really like an adventure story—but you also offer critique about the impact that you have as a researcher in the landscape and the impact of your research on the environment and indigenous people. Can you elaborate a bit on that?

Lindy Elkins-Tanton: Thank you so much. That’s a lovely introduction. We had a very large project that involved about 30 scientists from eight different countries, and most of the field work happened in Russia. In my particular part of the project, we had five field seasons in central Siberia; everywhere from down in the south, not too far from Lake Baikal, in Ust-Ilimsk on the Angara River; in central Siberia, near Tura, on the Nizhnyaya Tunguska River; and in the far north, near Norilsk, and also by a small town called Hanka on an inlet to the Arctic Ocean. In these different explorations, I was out in the field with a group of four or five people, sometimes with an American graduate student, but mostly with my Russian colleagues. It was astonishing to see from the helicopters—we would get dropped by helicopter out on these rivers, and then we spent several weeks in boats or hiking by ourselves, hundreds and hundreds of kilometers from anyone—to see the size of Siberia. Even for someone who lives now in the American Southwest, where I can be in a plane and look over the deserts of the western part of North America: Siberia is so gigantic. To see it is almost to see an ocean, only it’s land—and the beauty of it is breathtaking. When we were in the little towns, that’s when I would understand the human connection with this vastness. And one part of what I experienced is what it is to be a woman leader in science, particularly in exploration.

I think of all of the parts of human endeavor, exploration is one of the hardest places for women to find a foothold. It’s really thought to be the world of the male hero. I would be in these tiny towns and we would go to the little tiny grocery stores, and I would have little conversations with the women working in the stores. As soon as the men went away, they would bring out the berry liqueur that they had made from the previous year and give us little drinks. We would drink to each other’s health and immediately become best friends: we would learn how many children we each had and where we lived. And then they would always tell me that geology is no work for women, and that I should go home and be with my husband and my son right away.

I would just leave them, shaking their heads, and I would think, “what gender am I? I’m not a Russian woman. I’m not a Russian man. I’m not an American man. What am I doing?” I would feel so alienated from all the different parts of where I was. And then we would see the indigenous peoples—the Evenks and the other people who had lived in central Siberia, now increasingly displaced—and all these things together made me think more and more about what we all know, which is that exploration is the devastation and suffering of indigenous peoples. Exploration has always been for the financial betterment of, mainly, the wealthy men of the community. So I really see space exploration as a way for us to do it right, a way for us to be the society that we know we can be, and to become that inspiration for creating things better on Earth.

I was so excited about your art project and the fact that you look at the moon and you see the craters. Now imagine how exciting it was to me to read this paper, knowing something that Bettina did not know—which is that I’ve spent about half of my career studying the geology of the moon and studying the craters on the moon. I’m so familiar with the beautiful things that you’ve been staring at, and I’ve been so struck over and over again by how many men there are named; you’ve got Venus, which is named after a woman, but everything else in the solar system is named after men.

And then you created this art project, where we could put on the bottom of our boots the impressions of craters, and as we walked we could make our own craters here on Earth. I thought that was so beautiful and evocative. I’m interested to hear you talk about not just the materials—because when we create our craters with our boots, they’re transient; they’re in the sand of the seashore; they’re going to come and go. The craters on the moon are made of rock and hardened lava and they will be there for the age of the solar system—and the dichotomy of this, which I believe is driven by the hero model, which brings us back to exploration. If our hero is the one man who is the astronaut who could do the thing, that is actually not creating inclusion, it’s creating a barrier. I could never see myself in that person doing that thing. And so, what is the prevalence of the posture of the hero, the singular expert, the leader filled with confidence and assertion, in your field? And what is the relevant relative importance of raising others up as opposed to raising oneself up, which is what I manually see in academia and exploration? I think that your gorgeous work addresses all of that. I would love to hear you talk about it.

Bettina Forget: Oh, thank you. That’s a really great question, because we have that hero story, both in the arts and in science. Like Einstein—genius: single handedly will fill the whole blackboard with like these fantastic equations; that’s a trope. But on the other hand, you have people like Jackson Pollock—genius: sold some art around, best artist of North America. These are male hero types, and that is echoed in how we mark places as well. My inspiration for the Woman With Impact series was that only less than 2% of all new craters are named after women. It’s important how we name things on Earth. Lucy Lippard says like our cities are our mirrors.

I find that this idea of the hero story is so inaccurate, both in art and science. Actually, science is very collaborative; it’s always teams. Even in the arts—especially now in contemporary practice—it’s so collaborative: it’s cross disciplinary, transdisciplinary, interdisciplinary. We used to live inspired by working with other people. And I think that is a much more accurate and healthy way to approach it, as a network of individuals embedded in the network that is our world, our environment. We know that we’re one species of many. I think the sort of rhizome approach to life leads to more creativity and breakthroughs. The individual as a boundary is a problem. We need to open that up.

And, of course, the power dynamics and hierarchies that are implied through that hero model; women have a really hard time breaking into the STEM fields and the sciences, because you’re always being the “other” who breaks in. And when we’re looking at female achievements, even in the arts, it’s always, “Oh, women, they just work very hard, don’t they? They’re just so meticulous. And this is why they do it, making nice things.” And the men wake up in the morning, and then they just write a novel, that’s just how that happens.

Bettina Forget: And born geniuses. And I think art—and what we’re doing and what you’re doing—can really help break that. Especially by breaking the art and science boundaries, I think we’re breaking the associated gender stereotypes. That is a central part of my work, and something that you alluded to in your article as well—the idea that art can actually help us to be better humans on this planet. I would love to find out more about the Psyche-inspired project that you have instigated, where you’re bringing artists in to work on the Psyche mission, and the perspective that you’re taking on this.

Lindy Elkins-Tanton: We don’t have time to talk about that, unfortunately, though I would love to. I could invite everyone to look at our website and see what NASA has funded us to do with artists.

Learn more about Leonardo and Between Art and Science