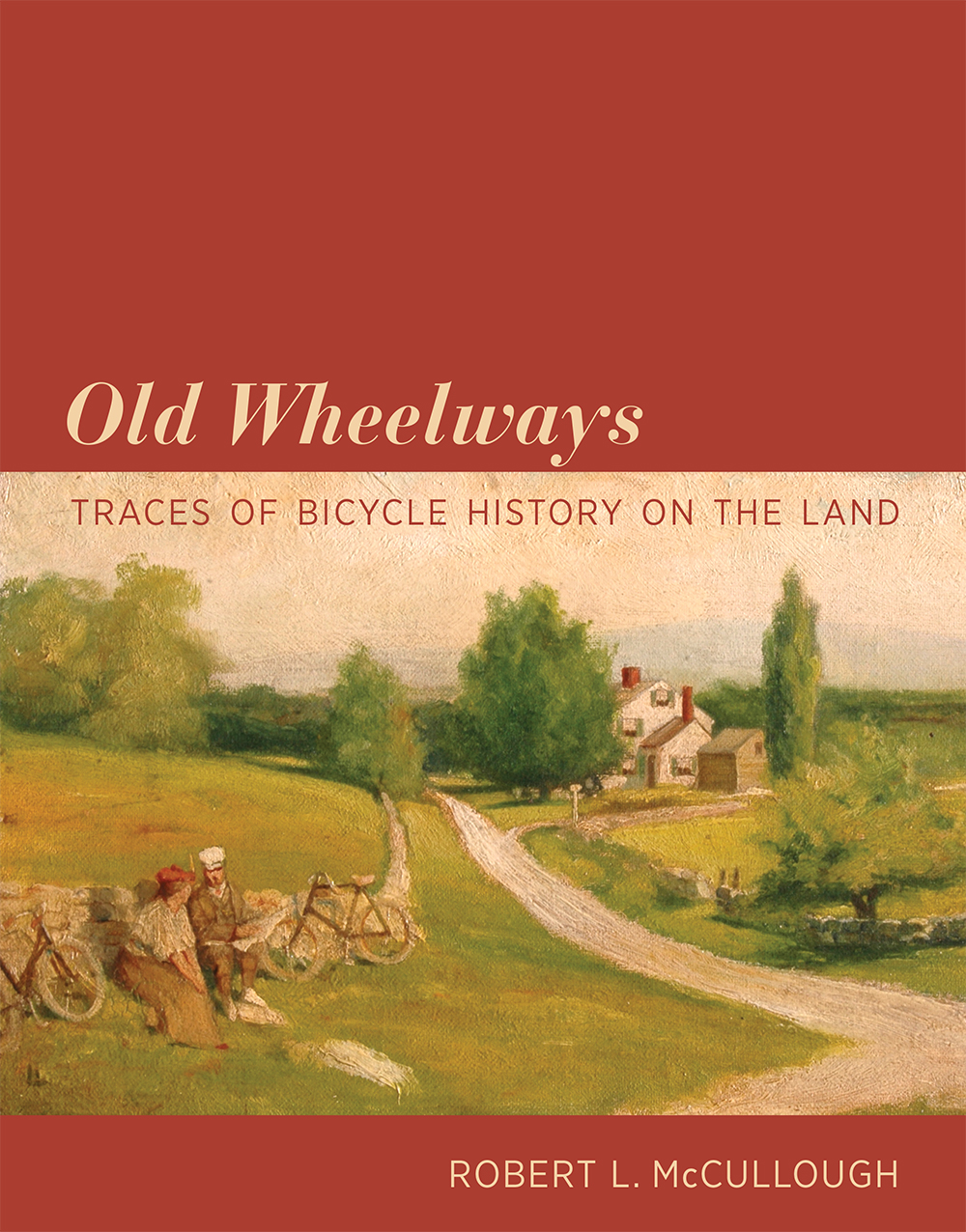 Today’s ubiquitous bicycle lanes owe their origins to nineteenth century versions, including New York City’s “asphalt ribbons.” Long before there were “rails to trails,” there was a movement to adapt existing passageways—including aqueduct corridors, trolley rights-of-way, and canal towpaths—for bicycling. Old Wheelways: Traces of Bicycle History on the Land by Robert McCullough explores how American bicyclists shaped the landscape and left traces of their journeys for us in writing, illustrations, and photographs. In honor of Bike to Work Week, Robert McCullough recounts how efforts by early cyclists led to better rural roads and bicycle paths.

American cyclists, whether pedaling along commuter corridors or roving cross-country, deserve recognition as valiant adventurers steadfastly exercising their legal and moral rights to use public roads, and their story is a heroic one—all the more so for the absence of respect accorded the bicycle by so many American motorists. Their story is also a time-honored one that begins more than a century ago, and today’s cyclists can summon resolve knowing that they join an august body of men and women who have long recognized that self-propulsion on two wheels can improve our productivity, personal health, outlook, and general ability to observe our surroundings in attentive ways. In turn, those qualities can influence our choices about the way we shape, consume or conserve our built and cultural environments. No small role for a seemingly-modest invention, the fundamental form of which has changed very little over the past century. 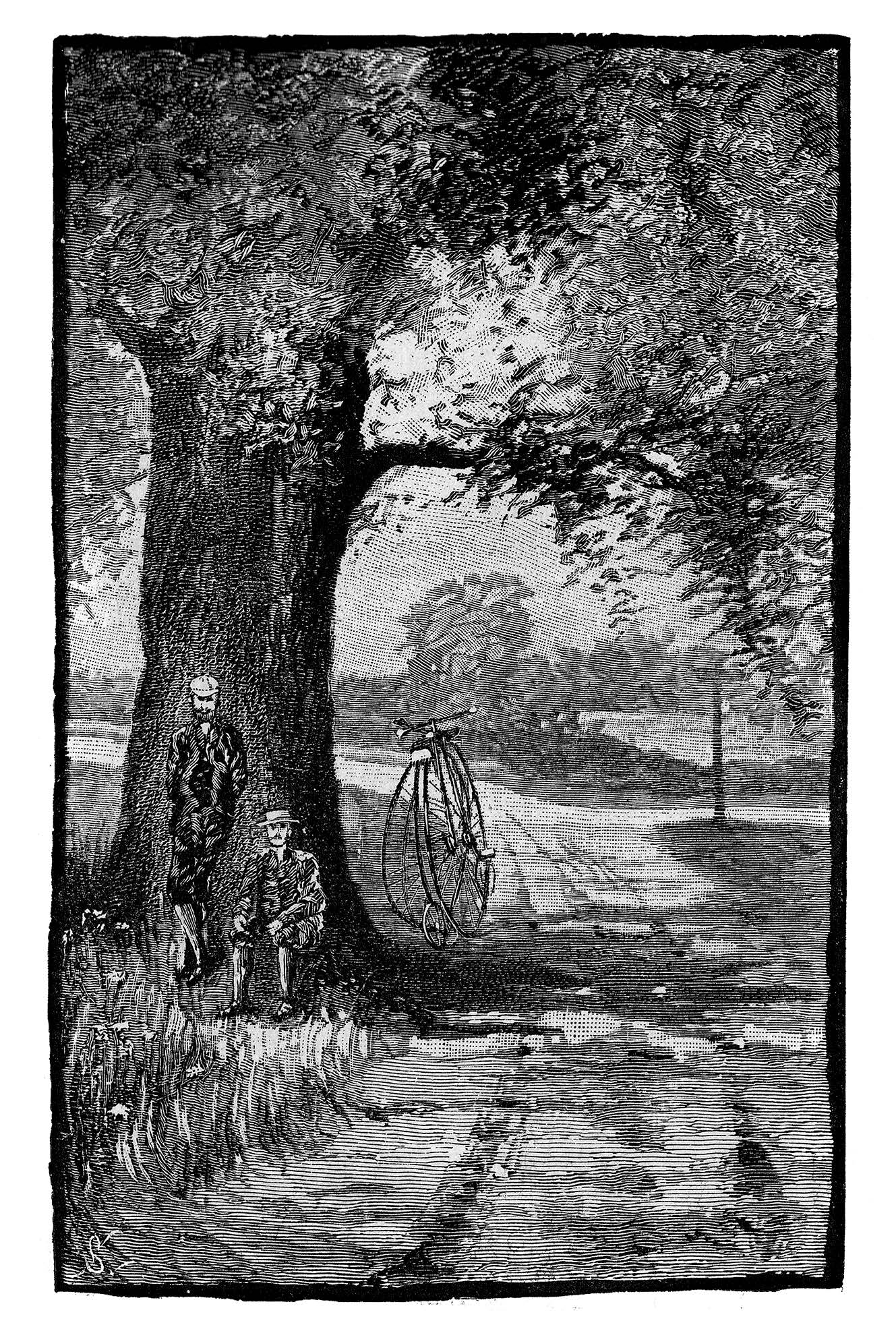 Cycling’s chronicle of touring in America begins in the fall of 1877, when Alfred Chandler, a lawyer from Brookline, Massachusetts, embarked on a four-hour, forty-mile journey from Leominster to Boston astride an elegant high-wheel bicycle manufactured by Singer and Company in Coventry, England. Hoping for a back wind to augment the sensation of flying, Chandler studied the countryside and changing foliage from a new perspective, perched atop the country’s first dependably-independent means of travel: a roadworthy machine capable of averaging fifteen miles an hour—road surface permitting! Other explorers soon ventured farther afield, for instance a trio of Boston riders—Charles Pratt, Edward Pope, and Winfield Slocum—who in 1879 pedaled from suburban Watertown to Portland, Maine, taking several days to complete the journey, which included a memorable climb above the Cocheco River in New Hampshire and a rewarding panorama of mountains, fields and villages. That same year, some thirty-five wheelmen led by Pratt, Frank Weston, and Albert Pope participated in a two-day tour of Boston’s suburbs, pausing at historic sites such as Brook Farm in Roxbury, or the Fairbanks House in Dedham. Recalling that famous “Wheel Around the Hub” many years later, Abbott Bassett, venerable secretary of the League of American Wheelmen, described such adventures as “touring with a purpose.”

Although high-wheel bicycles were both challenging and dangerous, mastered mostly by athletic men daring enough to risk somersaults over the handlebars, high-wheel tricycles offered an enticing alternative to women adventurers, and beginning in 1885 a group called the North Shore Tricyclists organized annual processions through communities north of Boston, reaching as far as Cape Ann and Newburyport. The women, who permitted men to join them provided the latter liquidated the bills, included cycling advocates Minna Caroline Smith, Mary Sargent Hopkins, and Helen Drew Bassett, the wife of Abbott and author of a cycling column “From a Feminine Point of View,” published under the pen name Daisie. Urging her companions to “strike out into new territory, explore new fields of observation, and try unfamiliar paths,” Daisie confided: “I seldom go upon the road that I do not seek to find some new way to reach this or that point, and I have to thank this disposition for much that is rich in my experience.” 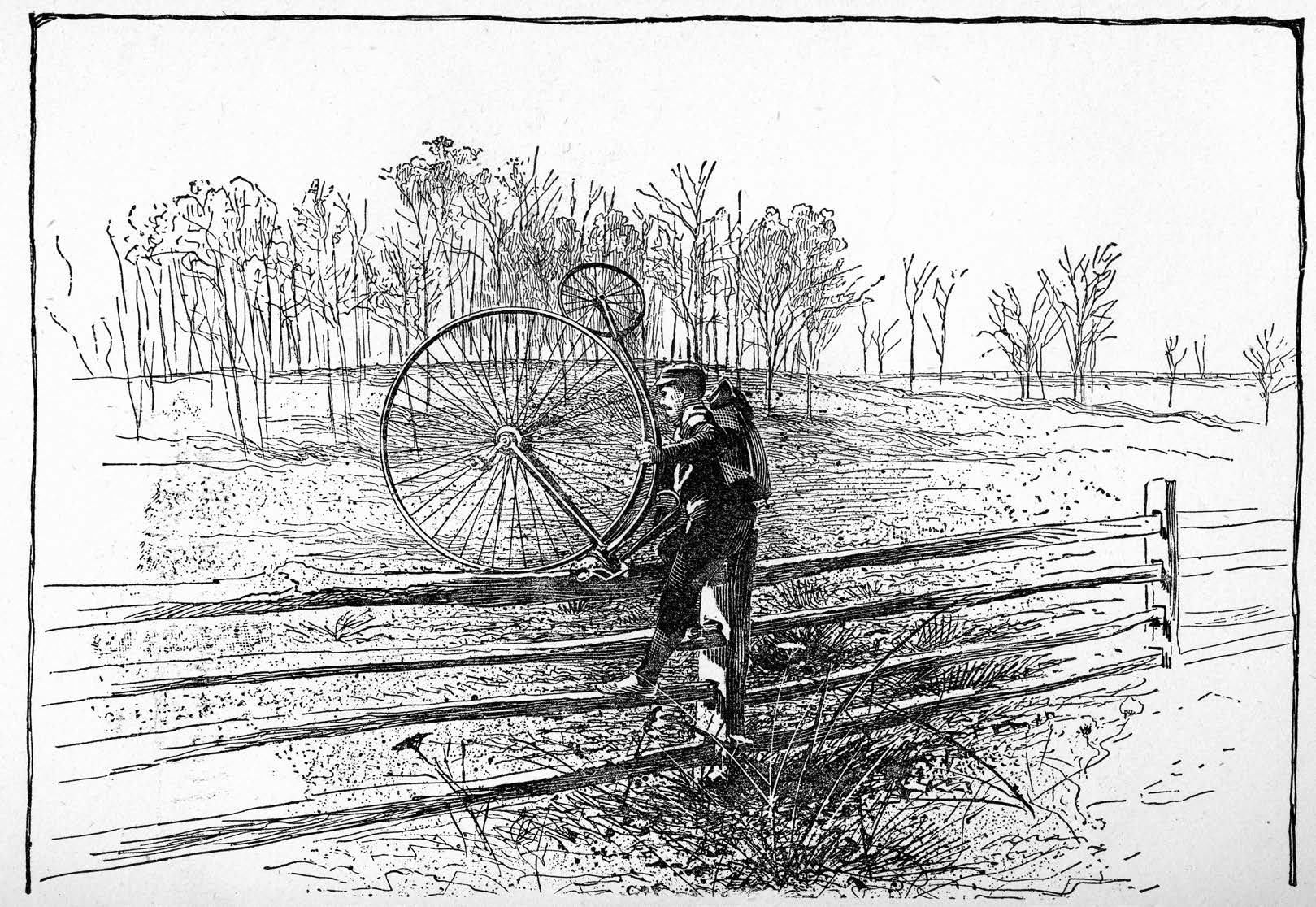 Cycling’s many journals promoted touring by publishing numerous travel stories, and editors enlisted artists such as F. Childe Hassam, Joseph Pennell, Frank Hamilton Taylor, Edmund Garrett, and Henry Sandham, who collaborated with skilled wood engravers including H. E. Sylvester and Kimball Atwood, to provide illustrations that transported readers to imagined places—but also to the nearby unknown. For instance, a Philadelphia wheelman, J. Howe Adams, reconnoitered a mysterious nether region south of Philadelphia called “The Neck,” where idiosyncratic market farmers lived in isolated freedom from the city’s tyranny of streets. In the process, cyclists such as Adams, many of whom had become practiced photographers, began observing their surroundings from a new vantage point and discovered visual qualities in landscapes too ordinary, at the time, to meet criteria established by practitioners of the picturesque. When did we learn that the exploration of the old and forgotten could be a stimulating activity, and when did artists discover that such places were worthy subjects of study? The answers to those questions are complex, but the independence provided by bicycles undoubtedly contributed to a growing appreciation for American landscapes. 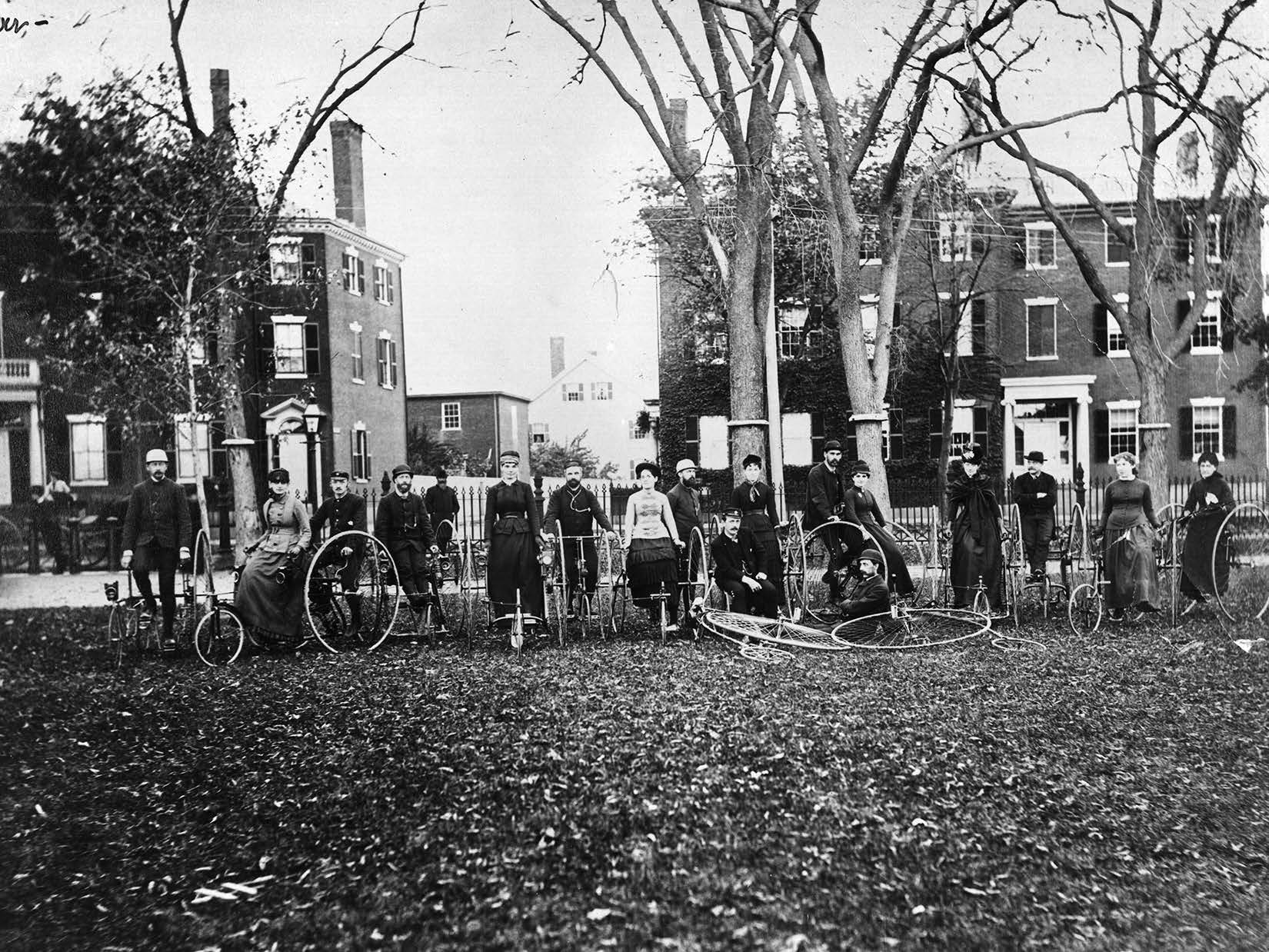 During the 1890s, following advent of pneumatic tires and the safety bicycle (two wheels of equal size and rear-wheel chain drive), bicycle tourists everywhere pedaled beyond the confines of city streets in pursuit of country riding. W. S. Beekman, a geologist from the Boston area, quite literally sought landmarks: the glacial grooves, scratches and grindings visible in bedrock laid bare, and he urged is fellow cyclists to study the open laboratory of nature. Other riders engaged in day trips, week-long adventures, or extended summer vacations, hoping to discover old villages or visit famous sites.

The paradise of open country beckoned to cyclists irresistibly, but the torment of poor roads lurked relentlessly—just out of sight around every bend or beyond the rise of every hill. Frustrated by the slow progress of the Good Roads movement, cyclists began building sidepaths as object lessons for rural citizenry unwilling to vote for public taxes to pay for highway improvements. Sidepath networks developed by county sidepath commissions in New York State, alone, surpassed two thousand miles in extent, and in some counties connected most villages and towns, traversed principal roads and crossroads, transformed communication between urban and rural communities, and allowed children living in the country to attend school in cities. Among upstate New York’s most popular paths, that between Rochester and the village of Scottsville, eleven miles apart, followed the berm side of the Genesee Valley Canal. The sidepath opened on a sunny day in September 1896, when more than 1500 celebratory riders traveled from Rochester to enjoy refreshments at the Cargill Hotel. Today, the hotel is gone but the corridor is part of an extensive greenway waiting to be explored. 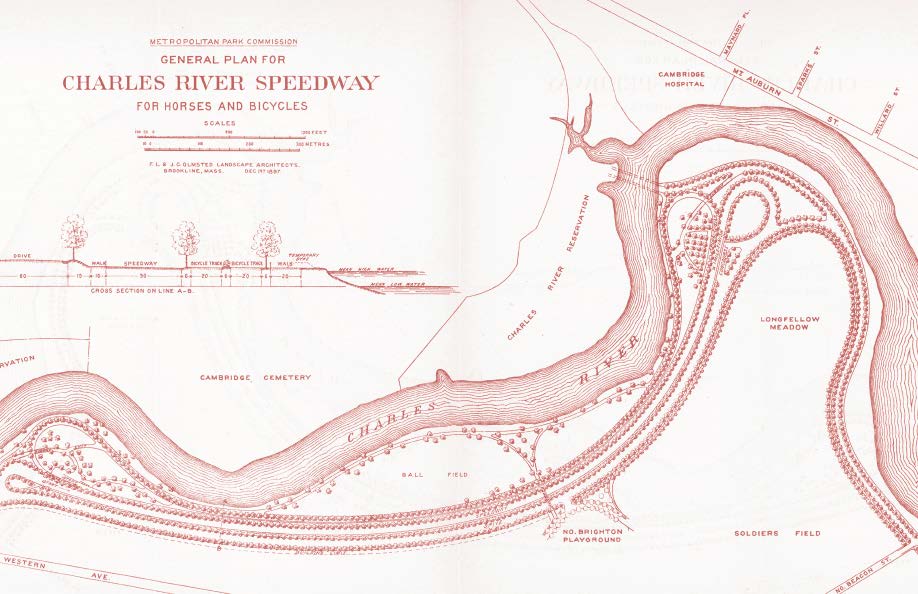 The 1897 Charles River Speedway. In addition to the track for harness racing, the plan provided a 2¼-mile bicycle course. Courtesy Massachusetts Department of Conservation and Recreation Archives. 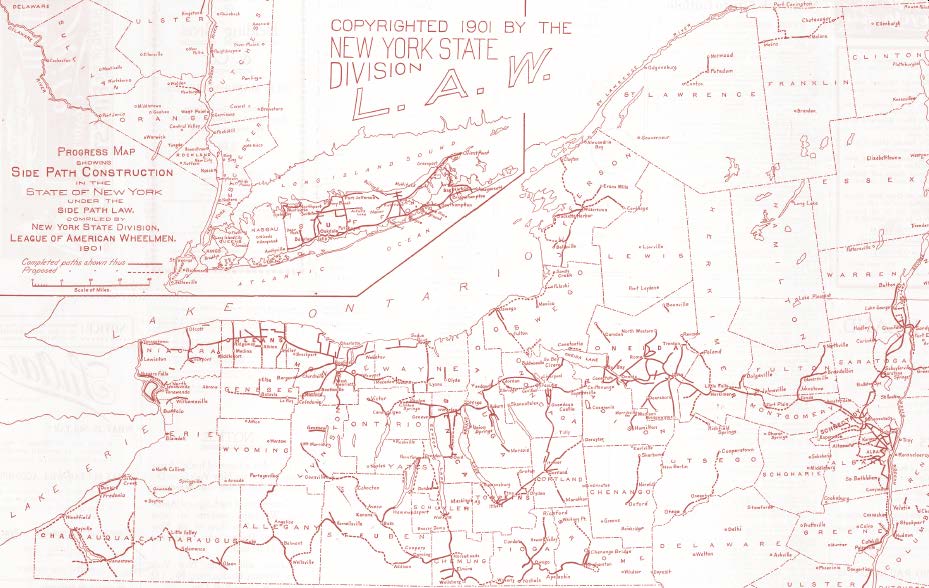