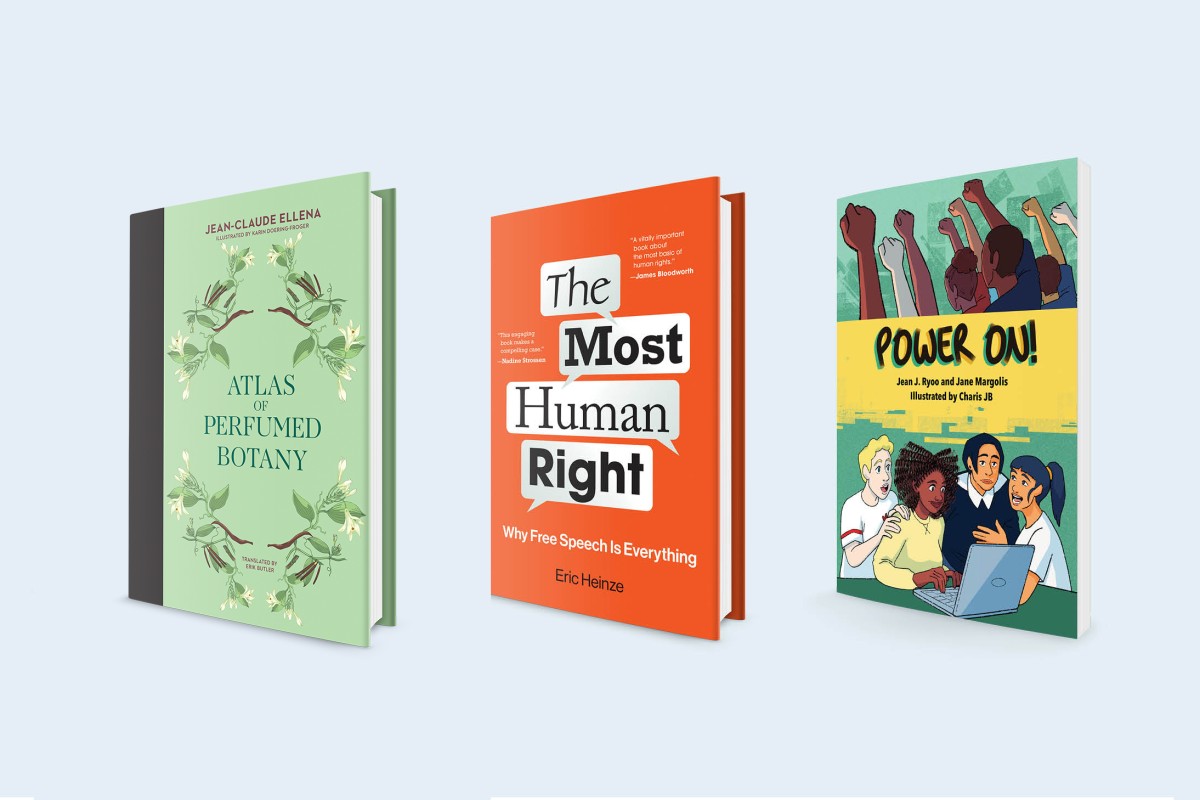 Explore a selection of our most anticipated new releases for April

New books this month: a cartography of fragrance; a bold argument for treating free speech as the fundamental human right; a graphic novel following a diverse group of teenage friends who learn how computing can be personally and politically empowering; and more. Explore these and a selection of our other new and soon-to-be-published titles below.

Literature’s Elsewheres: On the Necessity of Radical Literary Practices by Annette Gilbert

What is a literary work? In Literature’s Elsewheres, Annette Gilbert tackles this question by deploying an extended concept of literature, examining a series of diverse, radical, experimental works from the 1950s to the present that occupy the liminal zone between art and literature. These works—by American Artist, Allison Parrish, Natalie Czech, Stephanie Syjuco, Fiona Banner, Elfriede Jelinek, Dan Graham, Robert Barry, George Brecht, and others—represent a pluralized literary practice that imagines a different literature emerging from its elsewheres.

Some books on algorithms are rigorous but incomplete; others cover masses of material but lack rigor. Introduction to Algorithms uniquely combines rigor and comprehensiveness. It covers a broad range of algorithms in depth, yet makes their design and analysis accessible to all levels of readers, with self-contained chapters and algorithms in pseudocode. Since the publication of the first edition, Introduction to Algorithms has become the leading algorithms text in universities worldwide as well as the standard reference for professionals. This fourth edition has been updated throughout, with new chapters on matchings in bipartite graphs, online algorithms, and machine learning, and new material on such topics as solving recurrence equations, hash tables, potential functions, and suffix arrays.

“This insightful and penetrating analysis shows how free speech is not just another good thing we have a right to, like food and protection from abuse, but a prerequisite to the very concept of a ‘right.’ (If you disagree, would it be OK for authorities to prevent you from saying why?)” —Steven Pinker, author of Rationality

You might also like The New Fire: War, Peace, and Democracy in the Age of AI by Ben Buchanan and Andrew Imbrie

This lively graphic novel follows a diverse group of teenage friends as they discover that computing can be fun, creative, and empowering. Taylor, Christine, Antonio, and Jon seem like typical young teens—they communicate via endless texting, they share jokes, they worry about starting high school, and they have each other’s backs. But when a Black man is shot and killed by police in their city, they are outraged—and then they learn that he had been misidentified and tracked by an artificial intelligence program. How can an algorithm be racist? And what is an algorithm, anyway?

“A must-read for every educator working to make the pressing issues of technology and harm legible to kids.” —Safiya Noble, UCLA; author of Algorithms of Oppression

For perfume makers, each smell carries with it a multitude of associations and impressions that must be carefully analyzed and understood before the sum of all its parts emerges. All perfumers have their own idiosyncratic methods, drawn from their individual olfactory experiences, for classifying fragrances. In Atlas of Perfumed Botany, Jean-Claude Ellena—virtuoso perfumer and the “nose” of the luxury brand Hermès for more than a decade —leads readers on a poetic, geographic, and botanical journey of perfume discovery. Ellena offers a varied and fascinating cartography of fragrances, tracing historical connections and cultural exchanges. Full-page entries on plants ranging from bergamot to lavender are accompanied by detailed and vivid full-color botanical illustrations.

“Ellena writes in a vivid prose, and has a knack for translating smells into the written word… This enchanting volume merits a spot on any perfume connoisseur’s shelf.” —Publishers Weekly

Modeling the curatorial as a method for uniting cultural production and science, Climates. Habitats. Environments. weaves together image and text to address the global climate crisis. Through exhibitions, artworks, and essays, artists and writers transcend disciplinary boundaries and linear histories to bring their knowledge and experience to bear on the fight for environmental justice. In doing so, they draw on the rich cultural heritage of the Asia-Pacific, in conversation with international discourse, to demonstrate transdisciplinary solution-seeking.

Progressive scientists and conservation professionals are pursuing a radical new approach to restoring ecosystems: rewilding. By recovering the ripple effect generated by the interactions among plant and animal species and natural disturbances, rewilding seeks to repair ecosystems by removing them from human engineering and reassembling guilds of megafauna from a mix of surviving wild and feral species and de-domesticated breeds, including elk, bison, and feral horses. Written by two leaders in the field, this book offers an abundantly illustrated guide to the science of rewilding. It shows in fascinating detail the ways in which ecologists are reassembling ecosystems that allow natural interactions rather than human interventions to steer their environmental trajectories.

The Digital Closet: How the Internet Became Straight by Alexander Monea

In The Digital Closet, Alexander Monea argues provocatively that the Internet became straight by suppressing everything that is not, forcing LGBTQ+ content into increasingly narrow channels—rendering it invisible through opaque algorithms, automated and human content moderation, warped keywords, and other strategies of digital overreach. Monea explains how the United States’ thirty-year “war on porn” has brought about the over-regulation of sexual content, which, in turn, has resulted in the censorship of much nonpornographic content—including material on sex education and LGBTQ+ activism. In this wide-ranging, enlightening account, Monea examines the cultural, technological, and political conditions that put LGBTQ+ content into the closet.

“Richly sourced and accessible, The Digital Closet is an exercise in pornoliteracy, offering a compelling reading of the internet as structurally heteronormative.” —Shaka McGlotten, SUNY Purchase College

You might also like Digital Suffragists: Women, the Web, and the Future of Democracy by Marie Tessier

Productive Tensions: How Every Leader Can Tackle Innovation’s Toughest Trade-Offs by Christopher B. Bingham and Rory M. McDonald

Why is leading innovation in today’s dynamic business environment so distressingly hit-or-miss? Drawing on cutting-edge research and probing interviews with hundreds of leaders across three continents, in Productive Tensions Bingham and McDonald find that the most effective leaders and successful innovators embrace the tensions that arise from competing aims: efficiency or flexibility? consistency or change? product or purpose? Bingham and McDonald spotlight eight critical tensions that every innovator must master, and they spell out, with dozens of detailed examples of both success and failure, how to navigate them. The authors guide readers through innovation’s thorniest tensions, using examples drawn from the experience of organizations as varied as P&G, Instagram, the US military, Honda, In-N-Out Burger, Slack, Under Armour, and snowboarding company Burton.

You might also like Work without Jobs: How to Reboot Your Organization’s Work Operating System by Ravin Jesuthasan and John W. Boudreau

The Parent Trap: How to Stop Overloading Parents and Fix Our Inequality Crisis by Nate G. Hilger

Parenting is, by many measures, the largest industry in the United States. Yet it receives little political support, and its many workers—also known as parents—toil in isolation, without recognition or compensation. If they ask for help, they are made to feel guilty. The parenting industry has no centralized organization representing its interests, and it spends almost nothing on research and development. It’s almost as if parents are set up to fail. In The Parent Trap, Nate Hilger explains how this inefficient, inequitable, and demoralizing situation has come about and what we can do about it.

You might also like There’s Nothing Micro about a Billion Women: Making Finance Work for Women by Mary Ellen Iskenderian