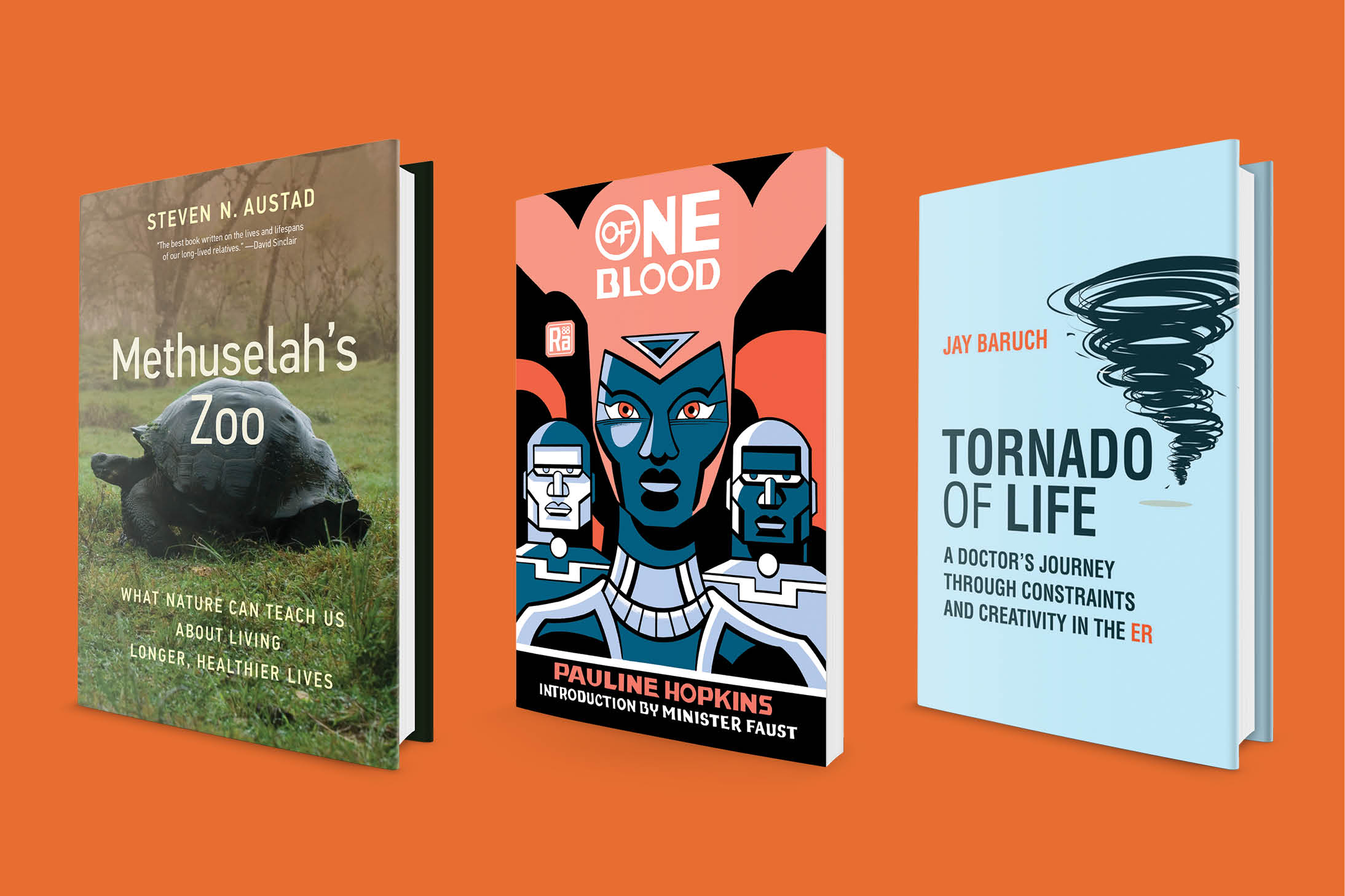 Explore a selection of our most anticipated new releases for August

This month: stories from an ER doctor; a 1903 novel about a Wakanda-like Ethiopian civilization; a study of long-living animal species; and more. Explore these and a selection of our other new and soon-to-be-published titles below.

Tornado of Life: A Doctor’s Journey through Constraints and Creativity in the ER by Jay Baruch

To be an emergency room doctor is to be a professional listener to stories. Each patient presents a story; finding the heart of that story is the doctor’s most critical task. More technology, more tests, and more data won’t work if doctors get the story wrong. When caring for others can feel like venturing into uncharted territory without a map, empathy, creativity, imagination, and thinking like a writer become the cornerstones of clinical care. In Tornado of Life, ER physician Jay Baruch shares these struggles in a series of short, powerful, and affecting essays that invite the reader into stories rich with complexity and messiness.

“A book that, with huge empathy and compassion, builds a bridge between doctor and patient, writer and reader. Engaging and thoughtful.” —Sinéad Gleeson, author of Constellations

You might also like Epidemic Illusions: On the Coloniality of Global Public Health by Eugene T Richardson

When did “parenting” become a verb? Why is it so hard to parent, and so rife with the possibility of failure? Sitcom families of the past—the Cleavers, the Bradys, the Conners—didn’t seem to lose any sleep over their parenting methods. Today, parents are likely to be up late, doomscrolling on parenting websites. In Long Days, Short Years, Andrew Bomback—physician, writer, and father of three young children—looks at why it can be so much fun to be a parent but, at the same time, so frustrating and difficult to parent. It’s not a “how to” book (although Bomback has read plenty of these) but a “how come” book, investigating the emergence of an immersive, all-in approach to raising children that has made parenting a competitive (and often not very enjoyable) sport.

“Physician and father Andrew Bomback brings remarkable compassion to this meditation on the work of parenting. Long Days, Short Years is an insightful and enjoyable read.” —Amy Fusselman, author of The Means

You might also like Optimal Motherhood and Other Lies Facebook Told Us: Assembling the Networked Ethos of Contemporary Maternity Advice by Jessica Clements and Kari Nixon

How to Stay Smart in a Smart World: Why Human Intelligence Still Beats Algorithms by Gerd Gigerenzer

Doomsday prophets of technology predict that robots will take over the world, leaving humans behind in the dust. Tech industry boosters think replacing people with software might make the world a better place—while tech industry critics warn darkly about surveillance capitalism. Despite their differing views of the future, they all seem to agree: machines will soon do everything better than humans. In How to Stay Smart in a Smart World, Gerd Gigerenzer shows why that’s not true, and tells us how we can stay in charge in a world populated by algorithms.

“In clear, unencumbered, and unpretentious prose, Gigerenzer demystifies the logic of our ‘smart’ societies. And … the overall message of the book—and indeed the author’s view of human nature—is empowering.” —John Zerilli, coauthor of A Citizen’s Guide to Artificial Intelligence

You might also like A Brain for Numbers: The Biology of the Number Instinct by Andreas Nieder

The Future of Competitive Strategy: Unleashing the Power of Data and Digital Ecosystems by Mohan Subramaniam

How can legacy firms remain relevant in the digital era? In The Future of Competitive Strategy, strategic management expert Mohan Subramaniam explains how firms can leverage both their traditional strengths and the modern-day power of data and digital ecosystems to forge a new competitive strategy. Drawing on the experiences of a range of companies, including Caterpillar, Sleep Number, and Whirlpool, he explains how firms can benefit from data’s enlarged role in modern business, develop digital ecosystems tailored to their unique business needs, and use new frameworks to harness the power of data for competitive advantage.

“The book is a must-read for industrial companies to effectively compete in the new digital world.” —Fabio Marasi, President and CEO, Walvoil S.p.A.

You might also like The Digital Multinational: Navigating the New Normal in Global Business by Satish Nambisan and Yadong Luo

This book offers intersectional, intergenerational, and international perspectives on nonfiction film- and videomaking by and about women, examining practices that range from activist documentaries to avant-garde experiments. Concentrating primarily on the period between the 1970s and 1990s, the contributions revisit major figures, contexts, and debates across a polycentric, global geography. They explore how the moving image has been a crucial terrain of feminist struggle—a way of not only picturing the world but remaking it.

Methuselah’s Zoo: What Nature Can Teach Us about Living Longer, Healthier Lives by Steven N. Austad

Opossums in the wild don’t make it to the age of three; our pet cats can live for a decade and a half; cicadas live for seventeen years (spending most of them underground). Whales, however, can live for two centuries and tubeworms for several millennia. Meanwhile, human life expectancy tops out around the mid-eighties, with some outliers living past 100 or even 110. Is there anything humans can learn from the exceptional longevity of some animals in the wild? In Methusaleh’s Zoo, Steven Austad tells the stories of some extraordinary animals, considering why, for example, animal species that fly live longer than earthbound species and why animals found in the ocean live longest of all.

Behind Their Screens: What Teens Are Facing (and Adults Are Missing) by Emily Weinstein and Carrie James

What are teens actually doing on their smartphones? Contrary to many adults’ assumptions, they are not simply “addicted” to their screens, oblivious to the afterlife of what they post, or missing out on personal connection. They are just trying to navigate a networked world. In Behind Their Screens, Emily Weinstein and Carrie James, Harvard researchers who are experts on teens and technology, explore the complexities that teens face in their digital lives, and suggest that many adult efforts to help—“Get off your phone!” “Just don’t sext!”—fall short.

“The authors’ research is impressive… Parents and educators losing sleep over what’s happening online would do well to give this a look.” —Publishers Weekly

“The three authors gave me more concrete advice on leading people, knowledge, and projects in this book than I could have ever learned from hiring an outside consultant for a year.” —E. LaVerne Johnson, Founder, President and CEO, International Institute for Learning, Inc.

Tomorrow’s Parties: Life in the Anthropocene edited by Jonathan Strahan

We are living in the Anthropocene—an era of dramatic and violent climate change featuring warming oceans, melting ice caps, extreme weather events, habitat loss, species extinction, and more. What will life be like in a climate-changed world? In Tomorrow’s Parties, science fiction authors speculate how we might be able to live and even thrive through the advancing Anthropocene. In ten original stories by writers from around the world, an interview with celebrated writer Kim Stanley Robinson, and a series of intricate and elegant artworks by Sean Bodley, Tomorrow’s Parties takes rational optimism as a moral imperative, or at least a pragmatic alternative to despair.

Explore more of the MIT Press’s new and upcoming releases