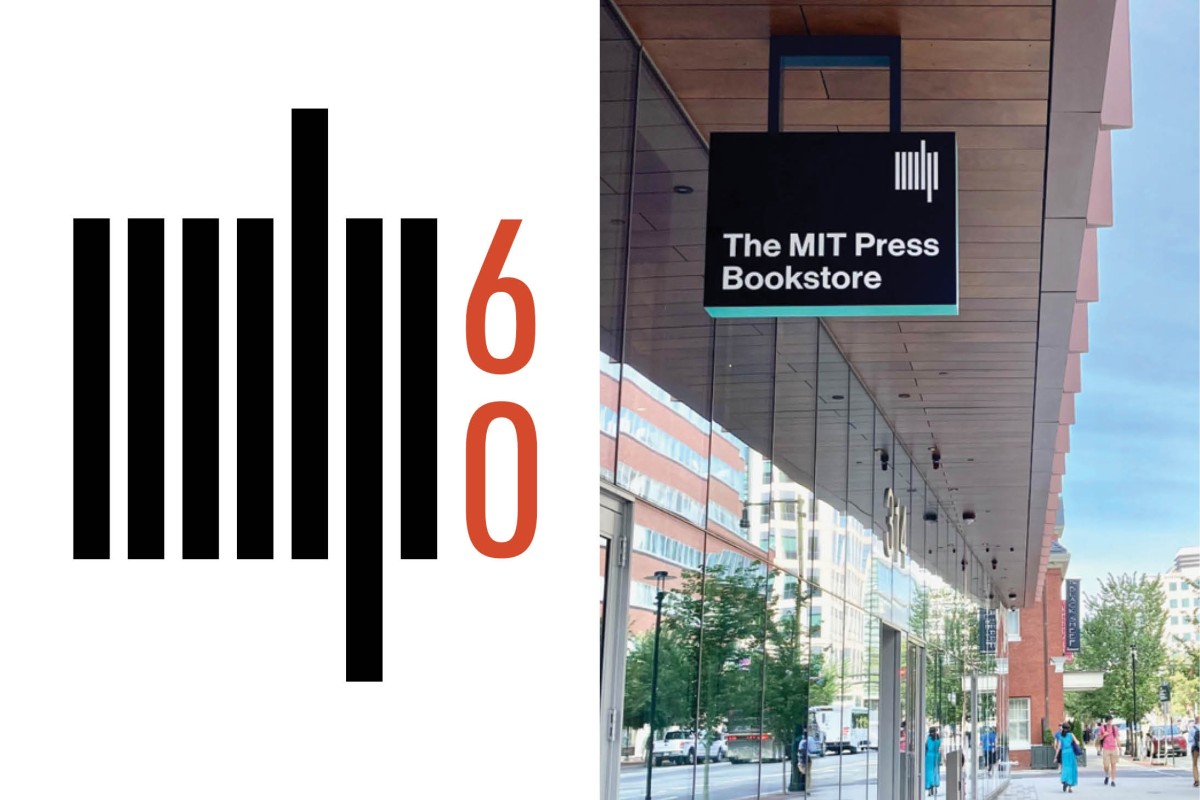 For over 40 years the MIT Press Bookstore has been an institution in Kendall Square, fostering ideas, knowledge, and conversation

Since 1962, the MIT Press has been a leader in university publishing, innovating at the intersection of science, technology, art, social science, and design. Nowhere is this more apparent than at the MIT Press Bookstore.

Located at 314 Main Street in the heart of Kendall Square in Cambridge, Massachusetts, the bookstore remains one of the few stores owned and operated by a university press. The bookstore’s mix of eclectic offerings reflects the Press’s publishing program; shelves are stocked with books and journals published by the MIT Press as well as a curated selection of other publishers’ books in related fields, including art and architecture, computer science, cognition, neuroscience, and linguistics.

Although the bookstore is new to its current home, having moved there in the fall of 2021, it is certainly not new to the area. Founded in 1980 just up the street from the current location at 292 Main Street, the bookstore has long been a mainstay in the Kendall Square neighborhood—following a brief stint from 2016 to 2021 when the bookstore relocated to Central Square at 301 Massachusetts Ave to allow for construction. “We were in Kendall Square in the 1980s when it was mostly empty lots,” said John Jenkins, the former MIT Press Bookstore manager from 2000 to 2019.

“It was really interesting in the early days of the bookstore because Kendall wasn’t completely developed yet,” added Jeremy Grainger, who managed the bookstore from 1984 to the 1990s. The neighborhood was (and still is) a unique location for a bookstore. “There wasn’t a whole lot there—but there were a couple of hole-in-the-wall bars and restaurants, and you could go in at lunchtime and see Nobel economists and linguistics professors sitting in the same diner as MIT Press accounting managers and local people from Cambridge.”

In the early days as the neighborhood was still growing, MIT students and the greater Institute community dominated the clientele and shaped the culture of the store. Programming frequently brought in authors or events that would appeal to the MIT audience with its unique, independent, and intelligent student body. (A prime example: In January 1997, the bookstore held a birthday party for HAL, the supercomputer from Stanley Kubrick’s 1968 film, 2001: A Space Odyssey, complete with a birthday cake.)

Even as the store expanded through the 1990s—with a newly digitized inventory and an initiative to begin selling non-MIT Press books—the MIT student population remained integral to the bookstore’s mission and drive. “We even had all student employees at one point,” Grainger said.

Famed sale events under a variety of names (the holiday sale, the “sala” sale, or the dock sale, throughout the years) offered opportunities for students and the surrounding Cambridge community to purchase MIT Press books for short money, including popular, pricier offerings like textbooks. Jenkins recalled one such occasion when books were sold based on how many you could fit in a bag: “Two students showed up with a shopping cart, filled the cart with books, and carried it out.”

In the 2000s and 2010s, these sales exploded in popularity; they were whole-weekend affairs, drawing interest from MIT, Cambridge, and a growing community of online resellers. “My whole first week on the job at the bookstore in 2005, I was in the back on the loading dock getting ready for the annual sale,” said Justin Kehoe, former MIT Press Bookstore bookseller and current department manager and acquisitions editor at the MIT Press. “I spent hours pulling books out of boxes and putting them on tables, and very quickly making distinctions on whether they would cost $3, $5, $7, or $10.”

“It was a lot of work,” he added—but this work helped bring MIT Press books to readers in a more equitable manner. Initiatives like the bookstore’s print-on-demand services, authors@mit lecture series (re–launched in spring 2022), and MIT Reads program also help to make scholarship more accessible to the greater MIT community. “The bookstore has always created a space that is a hub for ideas and conversations,” Kehoe said.

For the 40-plus years that the MIT Press Bookstore has been in business, the store’s customer base has been instrumental in fostering that atmosphere of learning and innovation. “Some of the smartest people on earth are in that bookstore every day,” Jenkins said. “If you can get five minutes of their time, you can learn something new.” And booksellers work to meet customers at that level by providing unrivaled expertise in key areas of scholarship and building a curatorial atmosphere at the store. Booksellers pride themselves on being able to suggest new leads on the latest scholarship to help advance a customer’s research. “Selling at the bookstore required more attentiveness, knowledge, and care than other bookselling jobs I had held,” Kehoe said. “It’s more like working in a boutique setting.”

“So much has moved online that your expert is often an algorithm now, not a person. But there are plenty of people who still want knowledge and recommendations from a human,” Jenkins added.

The recommendations one might receive at the MIT Press Bookstore are sure to be ones of deep academic value, featuring scholarship at the cutting edge of their field. “Books from commercial publishers just aren’t published with the same rigor as university publishing,” Jenkins argues. The ideas found in university press books are typically ones at the forefront of contemporary research, offering new concepts and scholarship that a reader won’t find anywhere else. “It’s a store where you can find things you can’t find at a lot of other bookstores,” Grainger said. “We have a lot of books at the leading edge of art, architecture, and design.”

Over time as Kendall Square grew, the bookstore began catering to the greater Cambridge community, and then to the world at large as Kendall Square became a center of tourist activity. “It stopped being a sleeping gallery for MIT Press books,” Grainger said. Since the 1990s the store has sold MIT Press products alongside complementary scholarship from other university presses and mainstream publishers. The store also looks for opportunities to grow its footprint throughout Boston and beyond, taking part in major festivals like the annual Boston Book Festival in the fall.

But even after years of growth and expansion, the store still holds its roots dear—including the Press’s storied legacy in the world of design, with definitive works like Bauhaus by Hans Wingler amongst our backlist titles and a design-centric course set by Muriel Cooper, the Press’s first design director and the creative mind behind our colophon. (Grainger recalled the first time he met Muriel Cooper at the bookstore: “One day a woman walked into the store with her dog. She said, ‘I understand you have a baseball cap with my logo on it,’ which was a product we were selling at the time. She loved it; I gave her a bunch of those hats that day.”)

“I’ve traveled all over the world and I’ve seen people in the MIT Press colophon t-shirt,” Grainger added. “The Press’s design is legendary and stands above and beyond any university press in its world renown.”

The rigor of the products on offer, the global recognition of MIT Press products, and the expertise of staff have given the MIT Press Bookstore a unique niche in a city filled with other independent sellers. Even so, it’s no doubt the publishing landscape has been transformed, oftentimes in difficult ways, since the autumn of 1980 when the bookstore first opened its doors. The last two years have accelerated this evolution as the pandemic has interrupted supply chains and made in-person selling more challenging and nearly impossible at times. But with a move to a new location this past fall and an eye toward growth, the MIT Press Bookstore seeks to change alongside the industry and the Cambridge neighborhood it calls home. “Kendall Square has changed, and the bookstore has evolved, changed, grown, and pivoted along with it,” Kehoe said.

The MIT Press bookstore plans to embrace that growth in the years to come. Now back at home in the heart of a shifting and developing Kendall Square—soon to be one of the most innovative urban hubs in Boston—the future has never looked brighter.