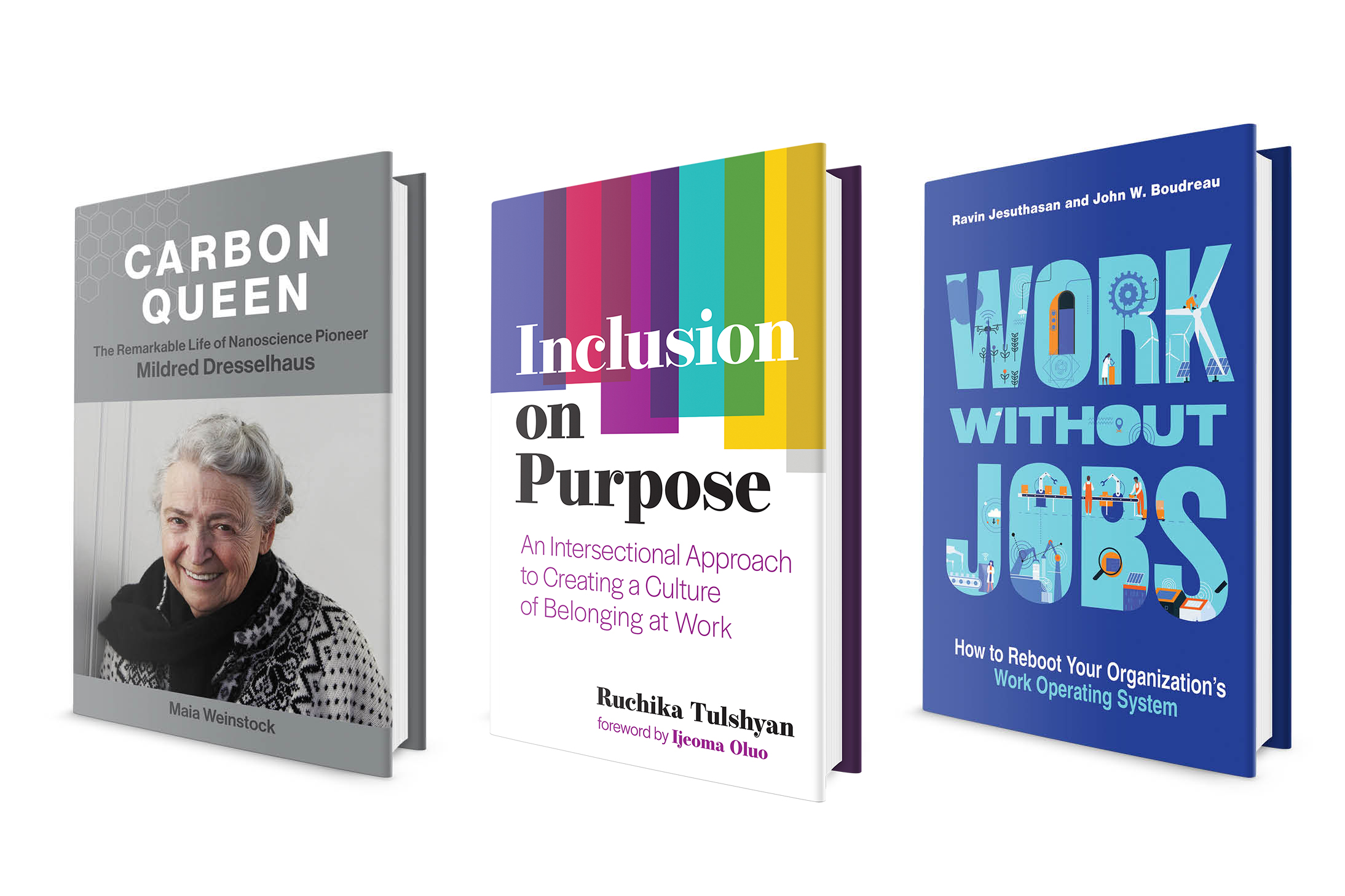 Explore a selection of our most anticipated new releases for March

This month: a biography of trailblazing physicist and MIT institution, Mildred Dresselhaus; a persuasive case for workplace equity, exploring the ways companies can address and prevent workplace bias while centering women of color; a deeply researched account of the future of work, embracing work deconstruction and reinvention; and more. Explore these and a selection of our other new and soon-to-be-published titles below. 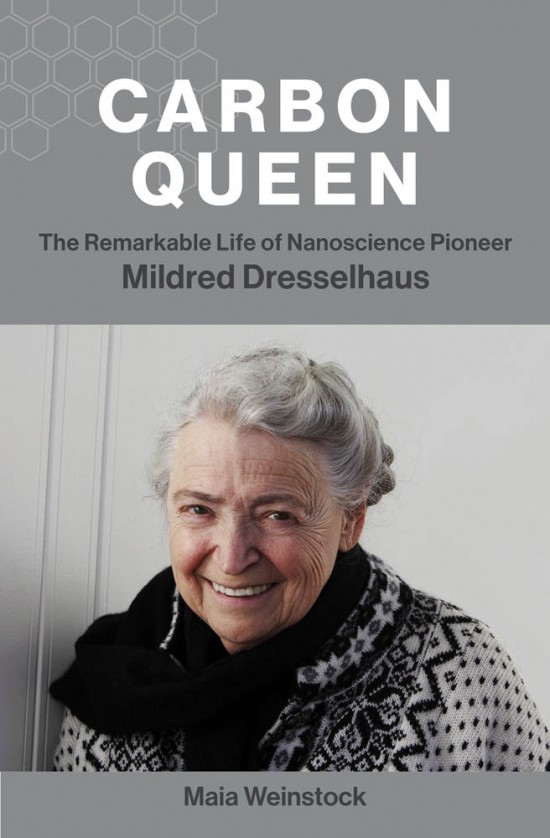 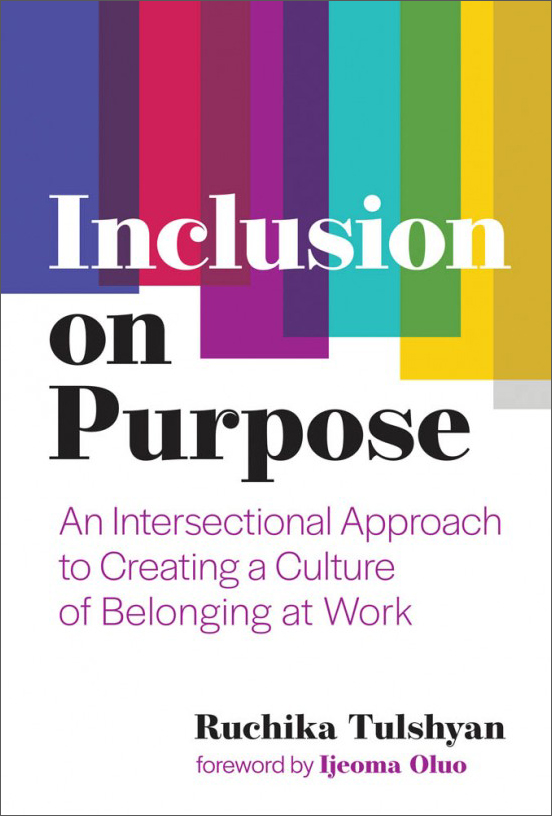 “As a woman of color and an executive, I know firsthand how important it is for companies to create opportunities for women of color to lead. Inclusion on Purpose shows how to build an inclusive workplace and culture through storytelling and practical frameworks.” —Reema Batnagar, VP People, Pixar Animation Studios

You might also like Leading in the Digital World: How to Foster Creativity, Collaboration, and Inclusivity by Amit S. Mukherjee

The New Fire: War, Peace, and Democracy in the Age of AI by Ben Buchanan and Andrew Imbrie 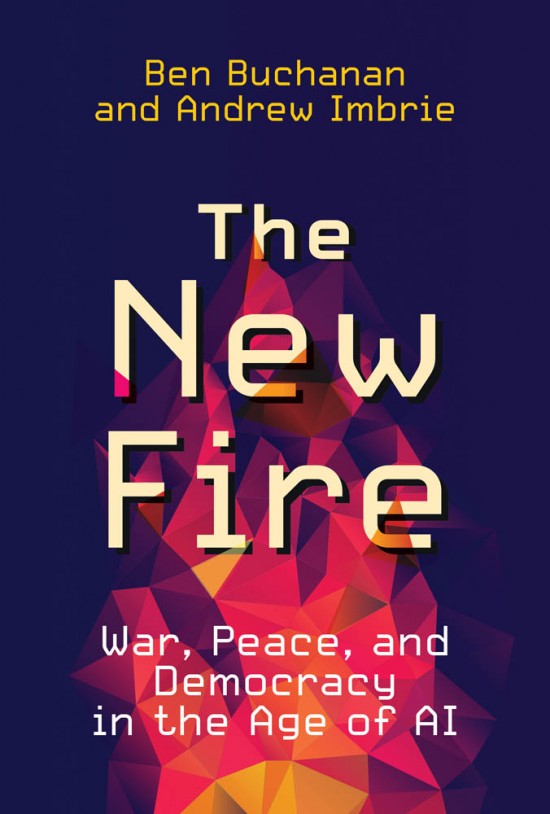 Artificial intelligence is revolutionizing the modern world. It is ubiquitous—in our homes and offices, in the present and most certainly in the future. Today, we encounter AI as our distant ancestors once encountered fire. If we manage AI well, it will become a force for good, lighting the way to many transformative inventions. If we deploy it thoughtlessly, it will advance beyond our control. If we wield it for destruction, it will fan the flames of a new kind of war, one that holds democracy in the balance. As AI policy experts Ben Buchanan and Andrew Imbrie show in The New Fire, few choices are more urgent—or more fascinating—than how we harness this technology and for what purpose.

“The New Fire is an essential guide to the age of artificial intelligence written by two of its leading scholars.” —Madeleine Albright, former US Secretary of State

Sexus Animalis: There Is Nothing Unnatural in Nature by Emmanuelle Pouydebat 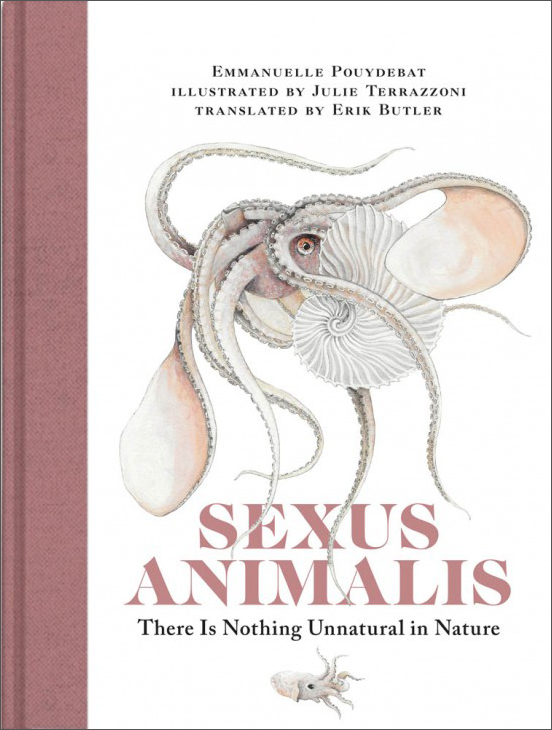 Voices from the Radium Age edited by Joshua Glenn 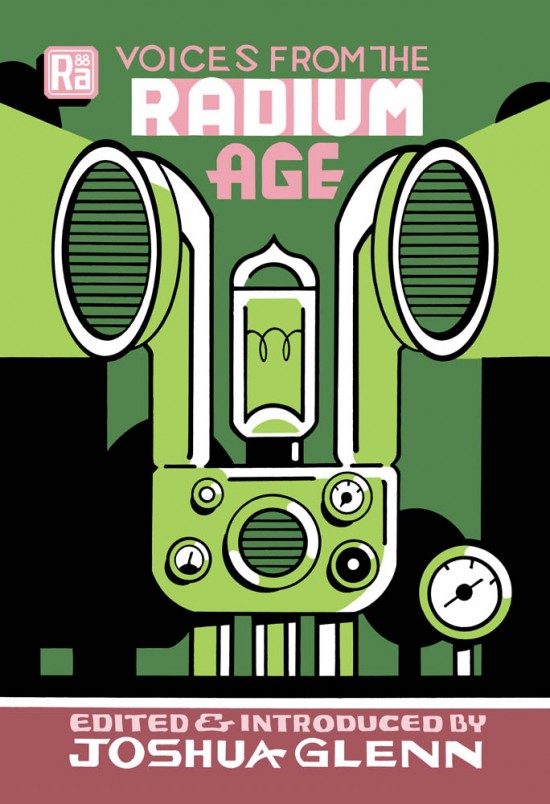 This collection of science fiction stories from the early twentieth century features work by the famous (Arthur Conan Doyle, creator of Sherlock Holmes), the no-longer famous (“weird fiction” pioneer William Hope Hodgson), and the should-be-more famous (Bengali feminist Rokeya Sakhawat Hossain). It offers stories by writers known for concerns other than science fiction (W. E. B. Du Bois, author of The Souls of Black Folk) and by writers known only for pulp science fiction (the prolific Neil R. Jones). These stories represent what volume and series editor Joshua Glenn has dubbed “the Radium Age”—the period when science fiction as we know it emerged as a genre. The collection shows that nascent science fiction from this era was prescient, provocative, and well written.

“For early SF buffs, this will be a substantial delight.” —Publishers Weekly

Design after Capitalism: Transforming Design Today for an Equitable Tomorrow by Matthew Wizinsky 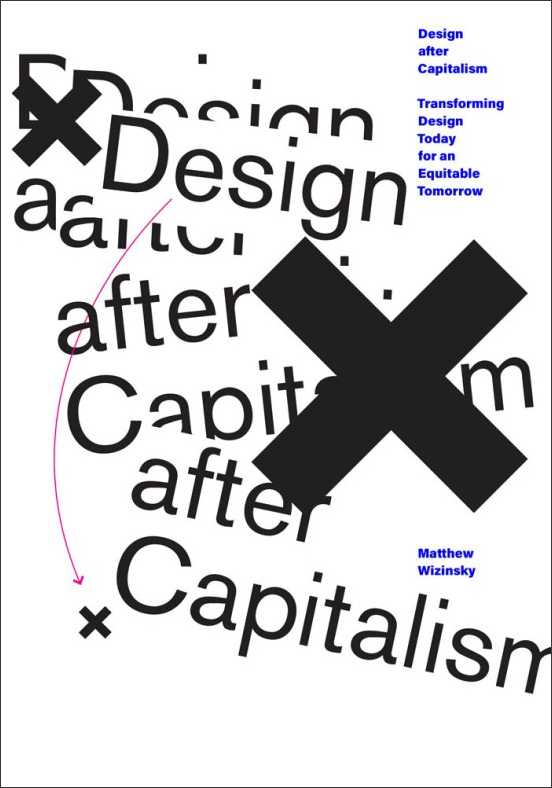 The designed things, experiences, and symbols that we use to perceive, understand, and perform our everyday lives are much more than just props. They directly shape how we live. In Design after Capitalism, Matthew Wizinsky argues that the world of industrial capitalism that gave birth to modern design has been dramatically transformed. Design today needs to reorient itself toward deliberate transitions of everyday politics, social relations, and economies. Looking at design through the lens of political economy, Wizinsky calls for the field to transcend the logics, structures, and subjectivities of capitalism—to combine design entrepreneurship with social empowerment in order to facilitate new ways of producing those things, symbols, and experiences that make up everyday life.

“Wizinsky’s provocative thinking leads us to ask: why wait for the end of capitalism to expand design practice beyond its historical development? Let’s start now.” —Carlos Teixeira, Illinois Institute of Technology Institute of Design

Work without Jobs: How to Reboot Your Organization’s Work Operating System by Ravin Jesuthasan and John W. Boudreau 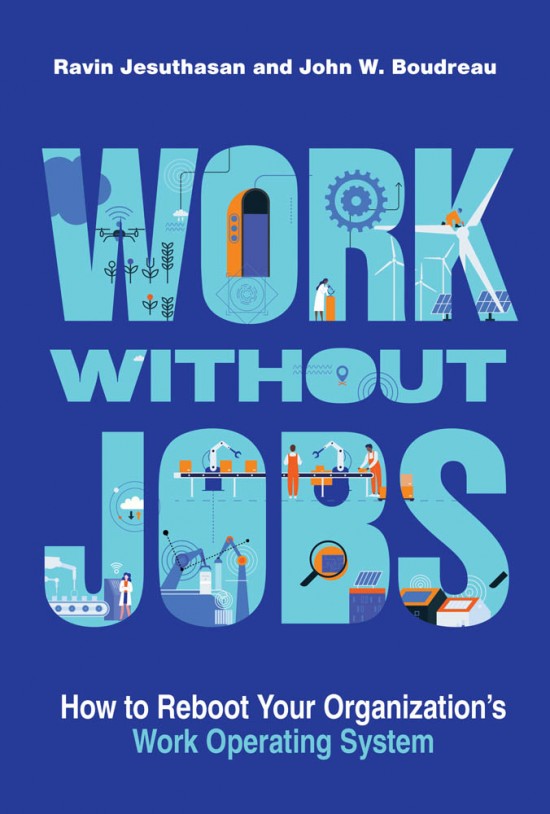 Work is traditionally understood as a “job,” and workers as “jobholders.” Jobs are structured by titles, hierarchies, and qualifications. In Work without Jobs, Ravin Jesuthasan and John Boudreau propose a radically new way of looking at work. They describe a new “work operating system” that deconstructs jobs into their component parts and reconstructs these components into more optimal combinations that reflect the skills and abilities of individual workers. In a new normal of rapidly accelerating automation, demands for organizational agility, efforts to increase diversity, and the emergence of alternative work arrangements, the old system based on jobs and jobholders is cumbersome and ungainly. Jesuthasan and Boudreau’s new system lays out a roadmap for the future of work.

“Work without Jobs should be required reading for the leader and HR manager of the future.”  —Marshall Goldsmith, #1 New York Times bestselling author of Triggers, Mojo, and What Got You Here Won’t Get You There

The Real World of College: What Higher Education Is and What It Can Be by Wendy Fischman and Howard Gardner 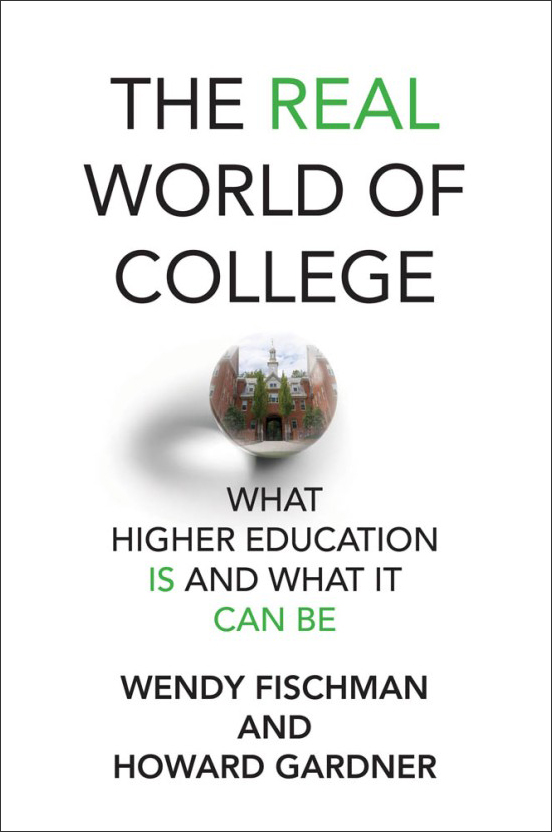 For The Real World of College, Wendy Fischman and Howard Gardner analyzed in-depth interviews with more than 2,000 students, alumni, faculty, administrators, parents, trustees, and others, which were conducted at ten institutions ranging from highly selective liberal arts colleges to less selective state schools. What they found challenged characterizations in the media: students are not preoccupied by political correctness, free speech, or even the cost of college. They are most concerned about their GPA and their resumes; they see jobs and earning potential as more important than learning. Many say they face mental health challenges, fear that they don’t belong, and feel a deep sense of alienation. Given this daily reality for students, has higher education lost its way? Fischman and Gardner contend that US universities and colleges must focus sharply on their core educational mission.

“Wendy Fischman and Howard Gardner distill decades of experience into this bracing, often surprising book about what college is, and is for. With rigor and wisdom, they burn away myths and challenge every American to recommit to truly higher learning.” —Eric Liu, CEO, Citizen University

You might also like Beyond Coding: How Children Learn Human Values through Programming by Marina Umaschi Bers 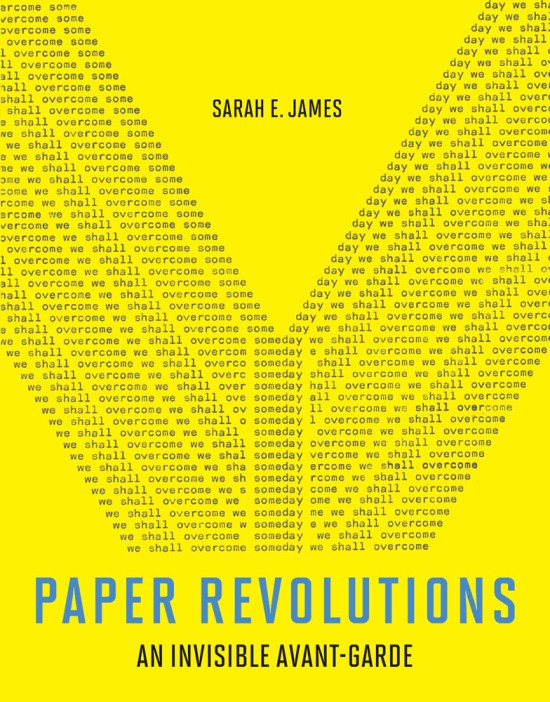 “This fascinating study exposes a lifeworld of intimate and sustaining vanguard artistic exchanges that thrived in unofficial corners of the East German regime.” —Barbara McCloskey, University of Pittsburgh; author of The Exile of George Grosz 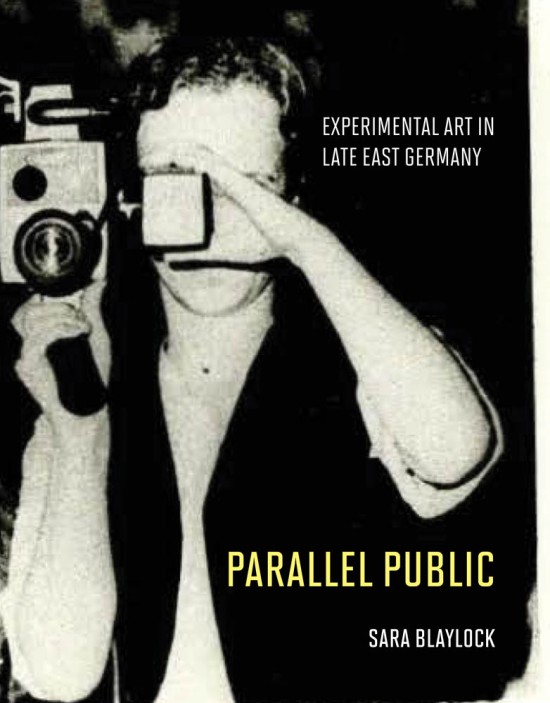 “Sara Blaylock’s pioneering book moves beyond the idea that art in the GDR was monolithic, isolated, or secretive.” —Sven Spieker, University of California, Santa Barbara