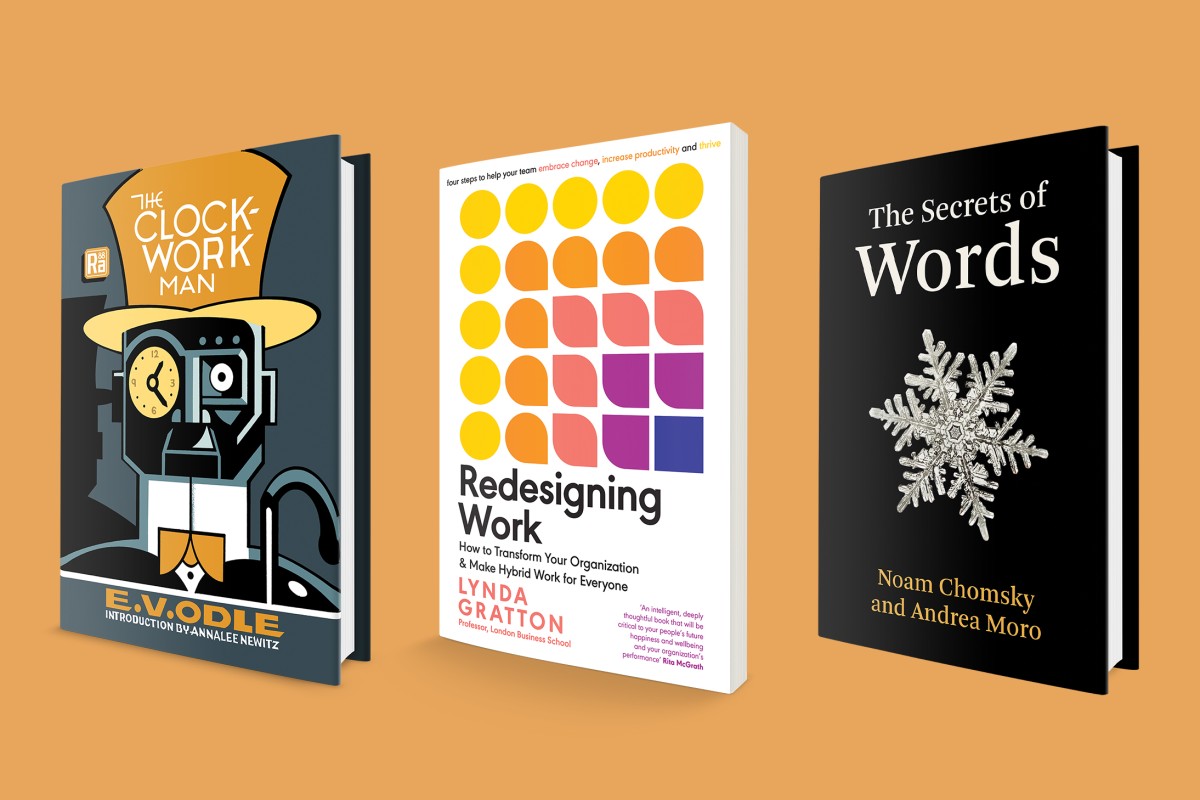 Explore a selection of our most anticipated new releases for May

This month: a republished 1920’s-era science fiction classic about a cyborg (the first-ever novel of its kind); a framework for redesigning work and making a hybrid environment work for your team; the latest from famed linguists Noam Chomsky and Andrea Moro; and more. Explore these and a selection of our other new and soon-to-be-published titles below.

Algorithms that work with deep learning and big data are getting so much better at doing so many things that it makes us uncomfortable. How can a device know what our favorite songs are, or what we should write in an email? Have machines become too smart? In Artificial Communication, Elena Esposito argues that drawing this sort of analogy between algorithms and human intelligence is misleading. If machines contribute to social intelligence, it will not be because they have learned how to think like us but because we have learned how to communicate with them. Esposito proposes that we think of “smart” machines not in terms of artificial intelligence but in terms of artificial communication.

“An innovative look at artificial intelligence that does not seek to oppose the intelligence of humans against that of machines, but rather explores the variety of communications between our societies and artifacts that do not reason like us but have learned to know us.” —Dominique Cardon, Professor of Sociology and Director of the Médialab at Sciences Po Paris

Kendall Square in Cambridge, Massachusetts has been called “the most innovative square mile on the planet.” It’s a life science hub, hosting Biogen, Moderna, Pfizer, Takeda, and others. It’s a major tech center, with Google, Microsoft, IBM, Amazon, Facebook, and Apple all occupying big chunks of pricey office space. Kendall Square also boasts a dense concentration of startups, with leading venture capital firms conveniently located nearby. And of course, MIT is just down the block. In Where Futures Converge, Robert Buderi offers the first detailed account of the unique ecosystem that is Kendall Square, chronicling the endless cycles of change and reinvention that have driven its evolution.

Redesigning Work: How to Transform Your Organization and Make Hybrid Work for Everyone by Lynda Gratton

How do we make the most of the greatest global shift in the world of work for a century and radically redesign the way we work—forever? Professor Lynda Gratton is the global thought-leader on the future of work. Drawing on thirty years of research into the technological, demographic, cultural, and societal trends that are shaping work and building on what we learned through our experiences of the pandemic, Gratton presents her innovative four-step framework for redesigning work that will help you understand your people and what drives performance, reimagine creative new ways to work, model and test these approaches within your organization, and act and create to ensure your redesign has lasting benefits. Whether you’re working in a small team or running a multinational, Redesigning Work is the definitive book on how to transform your organization and make hybrid working work for you.

“Thought-provoking, deeply researched, and invaluable, this fascinating book will help you build, lead, and guide your organization through this time of extraordinary change.” —Gary Hamel, management expert and founder of Strategos

You might also like Productive Tensions: How Every Leader Can Tackle Innovation’s Toughest Trade-Offs by Christopher B. Bingham and Rory M. McDonald

The Secrets of Words by Noam Chomsky and Andrea Moro

Cambridge, Massachusetts is a city of “firsts”: the first college in the English colonies, the first two-way long-distance call, the first legal same-sex marriage. In 1632, Anne Bradstreet, living in what is now Harvard Square, wrote one of the first published poems in British North America, and in 1959, Cambridge-based Carter’s Ink marketed the first yellow Hi-liter. W.E.B. Du Bois, Julia Child, Yo-Yo Ma, and Noam Chomsky all lived or worked in Cambridge at various points in their lives. Born in Cambridge tells these stories and many others, chronicling cultural icons, influential ideas, and world-changing innovations that all came from one city of modest size across the Charles River from Boston. Cambridge has not only a genius for invention but also a genius for reinvention, and authors Karen Weintraub and Michael Kuchta consider larger lessons from Cambridge’s success stories—about urbanism, the roots of innovation, and nurturing the next generation of good ideas.

“Fascinating, illuminating, and fun… Historical storytelling at its best.” —Robert Buderi, author of Where Futures Converge

You might also like Human Frontiers: The Future of Big Ideas in an Age of Small Thinking by Michael Bhaskar

From the time we roll out of bed to check overnight updates to our last posts, likes, and views of the previous day, we’re consuming and producing content. But what does the term “content” even mean? When did it become ubiquitous? And at what cost? In this volume in the MIT Press Essential Knowledge series, Kate Eichhorn offers a concise introduction to content and the content industry, examining the far-reaching effects content has on culture, politics, and labor in a digital age.

Hollis Frampton (1936–1984) was one of the most important experimental filmmakers and theorists of his time, and in his navigation of artistic media and discourses, he anticipated the multimedia boundary blurring of today’s visual culture. Indeed, his photography continues to be exhibited, and a digital edition of his films was issued by the Criterion Collection. This book offers the first collection of critical writings on Frampton’s work. It complements On the Camera Arts and Consecutive Matter, published in the MIT Press’s Writing Art series, which collected Frampton’s own writings.

Living and Working by Dogma

Despite the increasing numbers of people who now work from home, in the popular imagination the home is still understood as the sanctuary of privacy and intimacy. Living is conceptually and definitively separated from work. This book argues against such a separation, countering the prevailing ideology of domesticity with a series of architectural projects that illustrate alternative approaches. Less a monograph than a treatise, richly illustrated, the book combines historical research and design proposals to re-envision home as a cooperative structure in which it is possible to live and work and in which labor is socialized beyond the family—freeing inhabitants from the sense of property and the burden of domestic labor.

The Nexus: Augmented Thinking for a Complex World—The New Convergence of Art, Technology, and Science by Julio Mario Ottino

Today’s complex problems demand a radically new way of thinking—one in which art, technology, and science converge to expand our creativity and augment our insight. Creativity must be combined with the ability to execute; the innovators of the future will have to understand this balance and manage such complexities as climate change and pandemics. The place of this convergence is the Nexus. In this provocative and visually striking book, Julio Mario Ottino and Bruce Mau offer a guide for navigating the intersections of art, technology, and science.