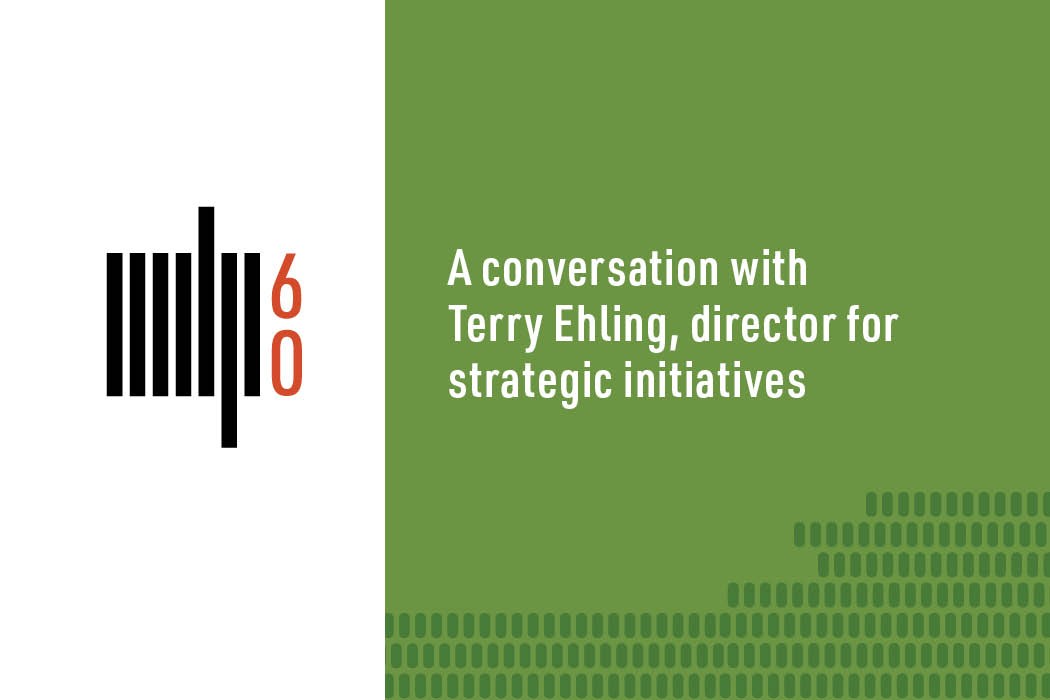 Terry Ehling discusses her work with the Press from 1983 onward, including our inaugural open access book and first forays into email

2022 marks the 60th anniversary of the MIT Press, born in 1962 out of expansion efforts from MIT’s original publishing arm, the Technology Press. In the years since, the MIT Press has continually fostered an intelligent, interesting, and devoted community of employees—in addition to publishing groundbreaking scholarship.

To celebrate 60 years of the Press, we are highlighting just a few of our long-serving staff members, including our director for strategic initiatives, Terry Ehling. Terry began her work with the Press in 1983, starting in the role of acquisitions editor before shifting her focus to digital products and strategic initiatives over the years. She moved to several other presses in the early 2000s before returning to the MIT Press, from which she plans to retire this fall. Prior to working in publishing, Terry was a sculptor exhibiting her steelworks throughout New York. She likes to say she pivoted from welding to words.

Read our conversation with Terry below, and sign up for our newsletter to hear more about our 60th anniversary celebrations.

Terry Ehling: I was hired in 1983 as an associate acquisitions editor to help build out the economics and computer science programs. I worked in both domains for about a year or so, until it became clear that the nascent computer science was where the Press wanted to make a strategic investment. Around that time we were working with McGraw Hill to jointly publish what became major textbooks in the computer science field, including Structure and Interpretation of Computer Programs (published in its third edition this year) and Introduction to Algorithms (published in its fourth edition this spring). Over my years at the Press, I’ve held roles as a senior acquisitions editor, director of the Digital Projects Lab, and now director for strategic initiatives.

MIT Press: You’ve had a big hand in much of the Press’s digital innovation over the last decades. Where did that start?

Terry Ehling: In the late ‘80s, one of my far-flung computer science authors asked me if we could communicate via email. This was before there was the internet as we know it today; this was still technically the ARPANET. He wanted to send us emails and he wanted to send us his manuscript via FTP. I didn’t know what any of that stuff was. We didn’t even have any computers at the Press. But I was intrigued, and, of course, this was MIT. So I spent a lot of time circling campus trying to find someone who would give me an account on a server that was running an email client. I eventually got my first email address (ehling@mit-multics.arpa), and that allowed me to communicate with our overseas authors much more efficiently. In the old days we used to have to hang around in the office until 7 or 8 o’clock at night so that we could make phone calls to colleagues and authors in Asia.

Email was just this amazing thing and it revolutionized how we could do work, but it certainly wasn’t perfect. In the 1980s, it was an arcane and wonderfully cultish way to communicate. Email addresses were long and complicated, since you had to specify the name of every single computer that would be transferring your message packets to your destination. Then you would wait for days to see whether the message actually arrived at its destination—and 9 times out of 10 it didn’t.

No publisher was doing anything like this. As the internet matured, and became more ‘user friendly’ we realized it would be amazing if we could actually put our catalog up online, in what was then known as Gopher space. We found a way to export our title records from our order processing system, clean them up, and structure the data so that we could deliver one of the first online catalogs. Then I registered our URL mitpress.mit.edu.

MIT Press: Did you experience any pushback trying to implement those changes?

Terry Ehling: No, we had a great director—the late, great Frank Urbanowski. He was a visionary and incredibly supportive. The only pushback that I got was when we tried to put The City of Bits online in 1995. Our author, William (Bill) Mitchell, was on our management board; he was a visionary in his own right. As we’re getting his new book ready to publish, he told us that he wanted to put the whole book up online. As far as I knew, no publisher had dared to do that before.

The Press was divided: Making the full text openly accessible could have completely knackered our print sales of the book. But we took the risk and ultimately sold 3x of the print edition, the web version essentially playing a significant role as a news-worthy marketing vehicle.

MIT Press: You left the Press in the early 2000s to work at Cornell, and then Johns Hopkins, before returning in 2017. What brought you back to MIT?

Terry Ehling: I have always loved being part of the MIT community. The Press has truly been the best place I’ve ever worked. By the time Amy Brand returned to the Press as Director in 2015, the Press was ready to restart its innovation program. She asked if I would want to come back and help her craft a new strategic innovation agenda for the Press, and I said yes. So that’s how I wound up back here. Where my career began is where I’ll be closing it out.

MIT Press: What’s your favorite project you’ve worked on at the Press?

Terry Ehling: Getting the catalog online was a heady and energizing experience. I worked with an MIT graduate student in computer science to develop the platform tech stuff, and he, and so many other CS students, were amazing to work with. And the City of Bits was a ground-breaking project. We were publishing pioneers. Those two things in the early- to mid-90s were real wins, I think, for the Press.

Terry Ehling: The colleagues, for sure. Bob Prior and I tagged teamed the CS list for nearly 20 years. Bob and I worked on some edgy projects together—including a pair of books written by computer scientist and cryptographer Phil Zimmermann. Phil was the creator of one of the first email encryption software protocols, still in use today, called Pretty Good Privacy. Phil wanted to make sure the code was available worldwide but the NSA made the export of strong cryptographic software illegal, so we simply printed the code in book form, and sold it overseas. MIT lawyered up, in the event that the government decided that taking legal action against the institute was justified. In the end we dodged a federal bullet and wound up burnishing our reputation within the computer science and hacker communities.

Terry Ehling: I love the books we published in the ‘60s but I’m especially fond of the Manuale Typographicum by Hermann Zapf published in 1970. It’s out of print but the production values are just outstanding. And, of course, there’s Muriel’s iconic Bauhaus by Hans Wingler.

The books we published in the ‘60s and ‘70s, before Frank focused our list building around MIT’s disciplinary strengths, were funky and pretty rad. During the Press’s start-up years, we were acquiring all kinds of rabbish, unconventional stuff. The Press really came into its own, and established itself as a unique university press, when we reframed our acquisitions efforts to focus on economics, computer science, cognitive science—areas that were, at the time, outside the traditional university press profile of humanities and social sciences.

But in those early days, we were definitely painting outside the lines. We published the collective works of Che Guevara; there’s a book by Fidel Castro in there. We published The Techniques of Springboard Diving by Charles Batterman; an important Russian-English dictionary; The Subjection of Women by John Stuart Mill; a biography of Erik Satie; a book of curated quotes from the I Ching. And the design books that we produced during Murial Cooper’s tenure as our design director were style-setting and effective. Of course, the iconic Bauhaus book is historic for us.

Terry Ehling: That the Press will continue amplifying the spirit that has driven and animated us for the past 60 years. We’ve been changing the rules of engagement between scholars and readers for 6 decades and I’m confident we’ll still be disrupting the status quo for decades to come.