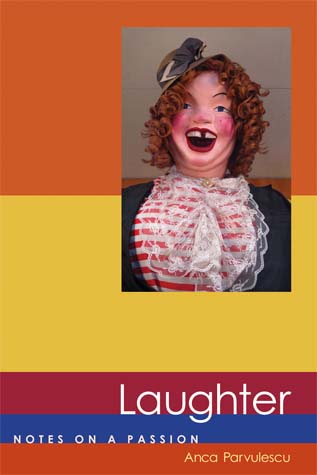 Happy Friday! In honor of Black History Month, we’ll post about related titles every Friday throughout February. Last year, we posted an excerpt from Anca Parvulescu’s Laughter that discussed Langston Hughes, Zora Neale Hurston, and laughter. We’re kicking off this year’s celebration with another excerpt from Laughter; this time focusing on Louis Armstrong and George W. Johnson.

Ralph Ellison’s hommage to Louis Armstrong comes in the form of the statement: “My strength comes from Louis Armstrong.” This strength is in a complex relationship to what Ellison calls “blues-toned laughter.” Armstrong’s “What Did I Do to Be So Black and Blue?” is the background to Invisible Man’s Prologue, lending it its organizing affective quality. But was does not often enter the discussion of Ellison’s relationship to Armstrong is the latter’s “Laughin’ Louie.” Recorded by Armstrong and his orchestra in 1933, “Laughin’ Louie” combines Armstrong’s trumpet numbers with his laughter, and lyrics written by Clarence Gaskill. Given the reading of Armstrong’s mouth as “grinning,” his “Laughin’ Louie” had an ambivalent reception, critics being confused as to his laughter’s relation to his “grin” and the “happy darkie” show Armstrong is also accused of having performed.

Armstrong’s precedent in mixing music and laughter is George W. Johnson’s “The Laughing Song.” Thought to be one of the first black recording artists, Johnson recorded his song many times between 1890 and 1900. Strongly within the minstrel tradition, the song sold thousands of copies. It is the first time that the “talking machine” laughed. The song’s lyrics recall an interpellation as “darkey” (“As I was coming ’round the corner, I heard some people say / Here comes the dandy darkey, here he comes this way… / His heel is like a snow plow, his mouth is like a trap, / And when he opens it gently you will see a fearful gap…”) to which Johnson responds with laughter (“And then I laughed…[laughter] I couldn’t stop from laughing…[laughter]”). The lyrics go on to warn the audience that, in case the song does not please, all one can do is laugh (“And then I laughed…[laughter]”). Johnson, in other words, laughs when interpellated as a “darkey” and confronted with the image returned to him, especially that of an excessive mouth—a “fearful gap” and a “trap.”

Johnson is laughing upon being hailed into the ideologeme of race (“Hey, darkey!”). Laughter is a response to hailing, raising crucial questions about the very notion of response. For what is a response? What does it mean to respond, and especially to respond properly? Usually thought of as a matter of commensurability and propriety, a response (re-spondēre: to promise in return) is a matter of reciprocity. A response is a response to something, whether a speech act or an action, which it struggles to commensurate. A response is by its very nature a “good response.” In the world of emotion, anger is such a “good response,” carrying overtones of a demand for redress. To laugh is to refuse to respond in the terms of the interpellation. One is being hailed (hailing is always a felicitous speech act), but the laughing yes that returns pushes the play of affirmation and negativity to new levels of ambiguity. It is no surprise that the subject produced or confirmed in the acoustic mirror of this hailing will laugh again.