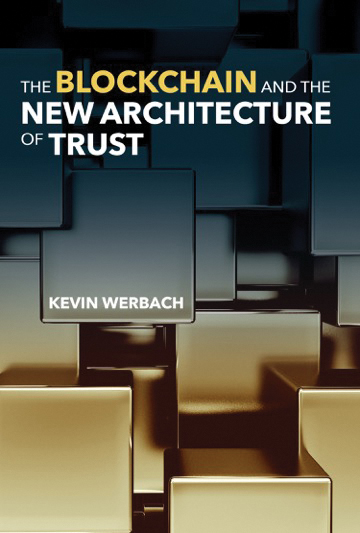 The Information Policy Series edited by Sandra Braman  and Paul T. Jaeger, publishes research on and analysis of significant problems in the field of information policy, including decisions and practices that enable or constrain information, communication, and culture irrespective of the legal siloes in which they have traditionally been located, as well as state-law-society interactions.

Some believe that the blockchain, the technology that underlies cryptocurrencies such as Bitcoin and can do so much more, makes it possible for people to create their own custom legal systems. Others go even further, arguing it will replace the nation-state altogether. But as Kevin Werbach, in The Blockchain and the New Architecture of Trust, points out, we have heard this before, with the Internet, and as before, he argues, not only will governments find a way to regulate blockchains—and with blockchains—but doing so is what will allow us to make the best uses of this clearly disruptive and, indeed, transformative innovation.

We are already seeing the potential. Walmart has found that using a blockchain for supply chain information allows it to identify items associated with food-borne disease that need to be removed from shelves in seconds rather than weeks. Where political and economic turbulence have left property records uncertain, the blockchain can keep land titles straight. The UN World Food Programme’s efforts to use the blockchain in its efforts to support refugees have been successful. The Delaware Blockchain Initiative is using it to record stock ownership in a manner that increases the efficiency and transparency of the stock market. A myriad other uses of the blockchain have been conceived, are under experimentation, or are already in use.

The blockchain looks like purely technical but, again like the Internet, it is sociotechnical in nature. Humans are essential to its performance: proof of work systems that support major platforms depend on miners, decisions about investing in blockchain hardware and software are made by humans, people are critical to blockchain operations in a variety of contractor and curator roles, and it is on the basis of human subjectivity that blockchains rise and fall. For cryptocurrencies, it is where the blockchain interfaces with the world of “fiat,” or government-backed currencies, that legal interventions can be particularly valuable for many of the same reasons that, as Josephine Wolff points out in You’ll See This Message When It Is Too Late, those are especially effective points for defending against and mitigating the costs of cybersecurity attacks. Of the many possible relationships between the law and the blockchain as modes of governance, Werbach argues that the most successful and effective will also be sociotechnical, combining “dry code” and human “wet code.”

Werbach’s approach to governance and the blockchain builds upon Nobel Prize–winner Elinor Ostrom’s insights into the polycentric nature of governance, driven by complex motivational structures operating across multiple scales and involving a wide range of types of public, private, and community-based arrangements. He argues that there are times when it may be best to use the blockchain to govern and other circumstances in which the law should remain supreme, but for many purposes the optimal approach may be to use wet (human) code and dry (technological) code in combination. The blockchain can supplement legal approaches to ensuring compliance with obligations by offering new means of achieving legal objectives, as when its use to record stock ownership could be integrated into the established securities system without changing or displacing any existing legal relationships. Blockchains can be used as policy tools by geopolitically recognized governments—and by those who would oppose authoritarian tendencies of such governments via, for example, its censorship resistance. The technology can be used to make legal compliance workable in situations in which existing mechanisms cannot handle the volume of activity, knowledge of what is being regulated is inadequate, or technological or social innovations have so changed the alignment of incentives that the legal system falls behind; a shared registry for orphan works would be such an instance. And the blockchain can be used as a substitute for legal systems when such is needed, in conflict zones or parts of the developing world.

The book’s recommendations for how the two forms of governance might work together go in both directions—making the law more code-like, and code more law-like. Law can become more code-like through uses of regulatory sandboxes, like safe harbors but more limited in time or scale; by pushing the use of boilerplate in the contracts of private law to its modular extremes; and by treating institutions involved as information fiduciaries. Code can become more law-like by literally linking smart and legal contracts via incorporating the code of each within the other; experimentation with this is already underway. Traditional legal enforcement mechanisms can be incorporated into smart contracts, and law-like governance processes can be built into blockchain platforms for “on-chain governance.” Rule of law itself might come to be treated as a service.

Approaching the blockchain from the perspective of governance takes us back to the most basic of questions: Where does government come from? We can thus read this book on two levels. The Blockchain and the New Architecture of Trust is essential reading about the opportunities and dangers raised by the blockchain technology and about the range of possible relationships between the blockchain and the law. As Kevin Werbach thinks his way through these questions, though, he is also addressing another. Historians of the law describe the current era as one in which law-state-society relations are undergoing transformations as fundamental as those that took place hundreds of years ago when the secular international system of states was first formed. Werbach explains to us just how that is happening as he examines the new approach the blockchain brings to building an architecture of the trust that is necessary for effective governance of any kind. And he tells us how we can engage with the process in ways that allow us to protect the human rights and civil liberties values we have fought so hard to protect, as well as the efficiencies and confidence through which the economy and all of our other human activities flourish.

Adapted from The Blockchain and the New Architecture of Trust by Kevin Werbach. Copyright 2018, The MIT Press.