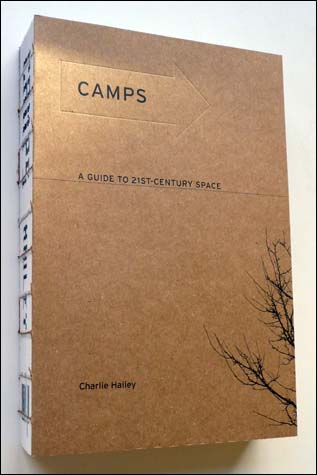 It’s a crisp 3 degrees in Cambridge this morning, so we’re warming our hands on our coffee mugs and dreaming of summer. For some of us, thinking of warmer days triggers memories of beaches and boats; for others, camping and bonfires. Since today also marks the anniversary of the Boy Scout movement’s beginning (1908), we’re revisiting Charlie Hailey’s Camps: A Guide to 21st-Century Space.

When most people think of camps, they imagine a picturesque campsite by the lake or computer camps for middle and high school students. Those examples don’t even scratch the surface of the types and purposes of camps. Whether the camps are a Concentration Camp, a Wall Camp (canvas and aluminum shelters that hang from the rock face of mountains), or a FEMA camp, Camps takes an in-depth view into every conceivable type of camp.

Other examples of camps that are included in the book:

Refugee Camp:  No camp crosses the line from impermanence to permanence quite like Benaco Camp in Tanzania, which was formed overnight on April 28th, 1994 when 250,000 refugees from Rwanda broke through its eastern border. These emergency camps, often a chaotic mix of self-settlement and planned campsite, define what could be the 21st century’s growing, unresolved global crises.

A-camp: The past 30 years have seen this camp type lay in dormancy. But with the contentious spaces being cleared and held in the tribal zones of Afghanistan, the use of this camp has become increasingly popular. With its distinct A-shape and 10 successive sections of deadliness separating the inner-workings of the camp from the outside world, it’s easy to see how US forces have been successful in staying safe and informed while in Afghanistan.

Boy Scout Camp:  Set up to take advantage of dueling resources (natural beauty and functional camp set-up), this camp type is a veritable outdoor classroom. With geometric efficiencies and distance dictates for safety, this camp evokes the ideal of the American West in its clearly defined spaces for sleeping, eating, and developing skills.

At the heart of a growing awareness of identity, residency, mobility, and safety, camps represent the struggles, possibilities, and emergencies of global existence as no other space can. Camps sets forth the vision for how we understand spaces and how those spaces are defined by politics and transform the ways we perceive our built environments.

For more about camps, be sure to check out Charlie Hailey’s guest post on Occupy Wall Street camps as urban stages.