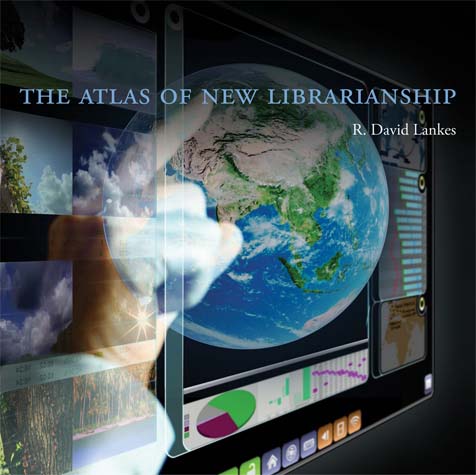 This year’s National Library Week (April 14-20) theme is “Communities matter @ your library.” In this vein, we’re celebrating with a guest post from R. David Lankes, author of The Atlas of New Librarianship. Here, he explains that the true collection of any library is not on the stacks, but in the community itself.

In early 2011, Egyptians took to the streets to demand liberty, justice, and social equity. On January 28 at 6 pm in Alexandria, after the prisons had opened, releasing murderers and rapists onto the street, all security withdrew from the streets. Gangs of looters took advantage of the chaos, looting and destroying government buildings. Some looters began to move toward the Library of Alexandria, a modern library the Mubarak regime had built to “recapture the spirit of openness and scholarship of the original”—a wonder of the ancient world. Mubarak built it and even put his wife on its board, clearly tying the $220 million building to his regime.

Yet, as it became apparent that the library might be in danger, protestors joined hands and surrounded the Library not to attack it or raid it, but to protect it. Throughout the protests and looting, the protestors—women, men, and children—stood firm and protected the library. After the uprising had succeeded in deposing Mubarak’s regime, not a window of the library had been broken, not a rock thrown against its walls.

Why had the people of Egypt protected the library? The Architecture? The collections? Partly. But over the 10-year history of the library, the librarians of Alexandria had done something amazing—they did their jobs. They took care of the books and artifacts and maintained the building, certainly. But more than that, they took care of the community. They saw that the true collection of any library—academic, public, or school in Egypt, London, or Fayetteville, New York—is not on the stacks, but the community itself. Librarians are not keepers of information; they are facilitators of the dreams and aspirations of a community.

So when you think of National Library Week, you may have images of books or buildings, but I think of radical positive change agents that seek to support and fulfill the aspirations of that community. If you would like to celebrate National Library Week, use your library to question authority. Use your library to seek liberty, justice, and social equity. Celebrate libraries not as places, but as platforms for a better tomorrow for your community.