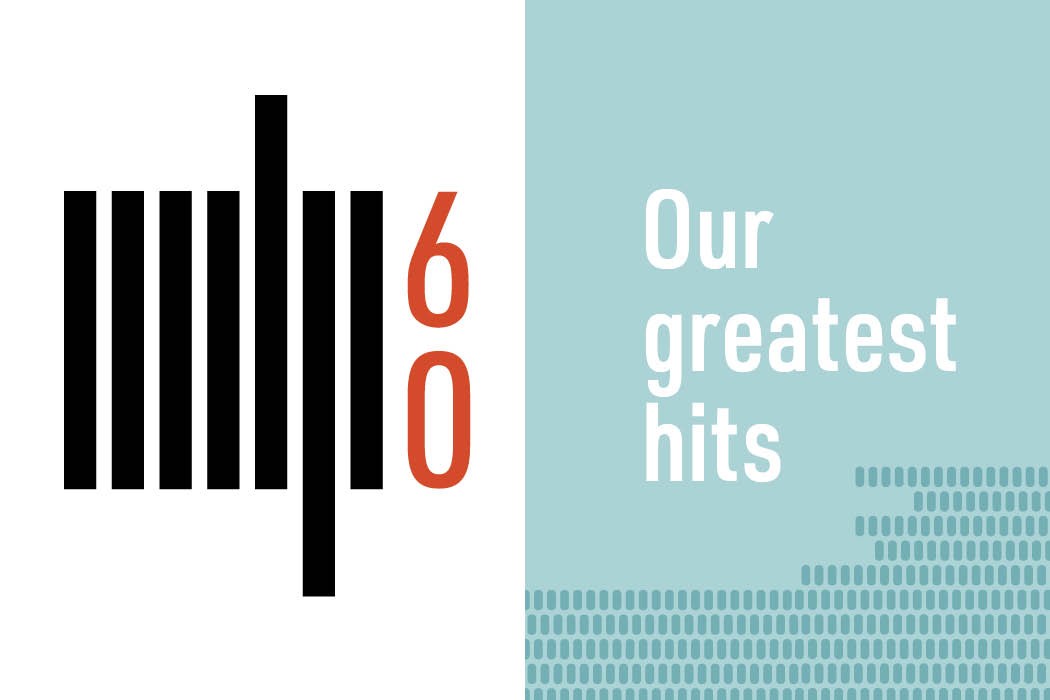 The MIT Press celebrates its 60th anniversary this year. The Press was formally established in 1962—and since then, it has provided a unique lens on the interplay among science, design, technology, and culture, to accelerate social progress and promote human understanding. Interdisciplinary and innovative, pushing boundaries in every direction, it is one of the world’s largest and most distinguished university presses operating today, with a list unparalleled in breadth, depth, and diversity. Its books, journals, and digital products are relentlessly forward-thinking and have helped shape emerging fields of inquiry.

Read on to explore just a few of these groundbreaking moments in our publishing history, and sign up for our newsletter to hear more about our 60th anniversary celebrations.

The MIT Press was founded in 1962 with a renaming of the Institute’s original publishing division, the Technology Press. Many of the books published in the first decade are evergreen sellers with continued influence. By the end of the 1960s, the Press had grown fivefold with increased title output, sales per title, and income from rights licensing. The Press also expanded its global footprint, opening its European marketing office in London in 1969.

Hans Wingler’s Bauhaus (1969) embodies several qualities that would come to identify the MIT Press. Beautifully designed and produced, this is the most reliable documentary book on the history and activities of the Bauhaus.

The publishing program in the 1970s was rich in groundbreaking titles, notably in architecture, linguistics, and philosophy. In addition to the books program, the 1970s saw the launch of the journals program with the publication of Linguistic Inquiry and Journal of Interdisciplinary History.

Learning from Las Vegas was published in a beautiful and lavish hardcover edition in 1972, followed by a practical paperback in 1977.

The MIT Press Bookstore opened its doors in Kendall Square in 1980, giving the Press a campus and community showroom for its publications. By acquiring Bradford Books, a small independent press, the Press established itself as the pre-eminent cognitive science publisher. The journals division launched The Journal of Cognitive Neuroscience, a key moment for the nascent field of cognitive neuroscience, creating further symmetry between the books and journals divisions. Other alignments included International Security, a link to the political science list, and October, the important art criticism and theory journal. October and the books division went on to co-publish many books.

Harold Abelson and Gerald Jay Sussman’s Structure and Interpretation of Computer Programs changed how computer science was taught and how computer scientists thought about programming. The latest edition, published this year during our 60th anniversary in 2022, focuses on JavaScript.

The Press launched its first online catalog in 1994 and was one of the first publishers to create open access digital content. In 1999, The MIT Encyclopedia of Cognitive Science, a landmark reference work with more than 400 authors, was made available online as an accessible work-in-progress. MITECS became the keystone work around which the MIT CogNet platform was conceived and designed. In 1995, William J. Mitchell’s City of Bits was published simultaneously in print and on the open web. By the end of the decade, the Press had established the Digital Projects Lab, to operationalize its experimental efforts in publishing technology.

The Digital Projects Lab developed CogNet, an online community for the cognitive sciences, and ArchNet, the analogous community for Islamic architecture. In the journals division, the Press partnered with the American Academy of Arts and Sciences to publish their flagship journal, Daedalus. The Press launched the born-digital journal, International Journal of Learning and Media, featuring multimedia articles. In the books division, the Press continued to push against established boundaries, publishing titles with adventurous design and new voices, often in uncharted fields and through unconventional partnerships.

The Press continued to think and act boldly: publishing trade science bestsellers, books by and about trailblazing women in STEM, and critical works on emerging issues such as food justice. Toward the end of the decade, the Press launched MIT Press Direct, a dedicated hosting platform for the Press’s digital content.

The Press continues to focus on diverse perspectives from the most credible, creative, and interdisciplinary minds. Actively publishing BIPOC voices, the Press launched the Fund for Diverse Voices and foregrounded chronically underrepresented perspectives on critical topics spanning the arts, humanities, and sciences. In collaboration with Candlewick Press, the MIT Press recently launched two new book series, MIT Kids Press for children and MITeen Press for teens, in order to convey mind-expanding knowledge to a new audience of readers.

In response to the pandemic, the MIT Press and UC Berkeley launched the innovative and award-winning peer review overlay journal, Rapid Reviews: COVID-19, to provide a quality and trust filter that helps combat misinformation about the coronavirus.