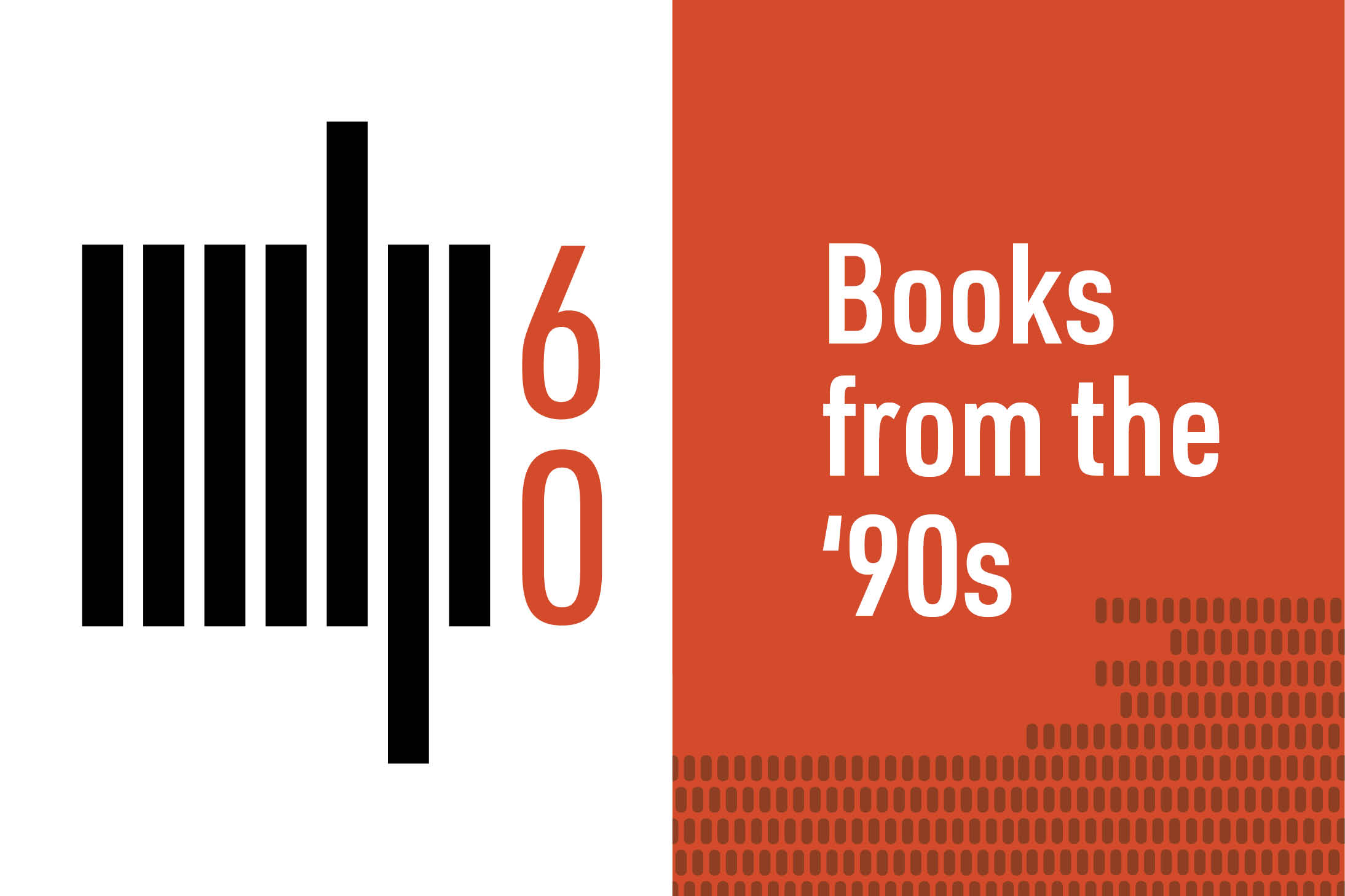 To celebrate the 60th anniversary of the MIT Press, we are highlighting key moments of our publishing history from the 1960s to present day—including our favorite book covers of the ‘60s and big thinkers of the ‘80s. Today we turn to our retrospective of the 1990s.

With the onset of the dot-com boom, the Press was at the forefront of new publishing ventures: launching its first online catalog in 1994 and becoming one of the first publishers to create open access digital content. The books below include an exploration of how people make decisions; a landmark study of the economic environment of the 1990s; and an examination of a new type of “city” formed by the burgeoning world wide web—and include several Press employee recommendations.

Read on to explore more of our favorite Press books from the ‘90s, and stay tuned throughout the year as we celebrate our 60th birthday—sharing pieces of Press history and selections of our books and work over the decades. You can also explore well-wishes from friends of the Press—and even add your own message—on our 60th anniversary website.

City of Bits: Space, Place, and the Infobahn by William J. Mitchell (1995)

Entertaining, concise, and relentlessly probing, City of Bits is a comprehensive introduction to a new type of city, an increasingly important system of virtual spaces interconnected by the information superhighway. William Mitchell makes extensive use of practical examples and illustrations in a technically well-grounded yet accessible examination of architecture and urbanism in the context of the digital telecommunications revolution, the ongoing miniaturization of electronics, the commodification of bits, and the growing domination of software over materialized form.

Recommended by Terry Ehling, director for strategic initiatives at the MIT Press: “The City of Bits was a ground-breaking project for us in the 1990s. We were publishing pioneers. This was our first open access foray; so today we can proudly say that we’ve been publishing open access for almost 30 years.”

How did electricity enter everyday life in America? Using Muncie, Indiana—the Lynds’ now iconic Middletown—as a touchstone, David Nye explores how electricity seeped into and redefined American culture. With an eye for telling details from archival sources and a broad understanding of cultural and social history, he creates a thought-provoking panorama of a technology fundamental to modern life.

“David Nye casts his bright light on everything from assembly lines to washing machines, from the plummeting price of urban electricity to the usefulness of electric incubators in chicken farming.” —John R. Stilgoe, New York Times Book Review

American Ground Zero is the extraordinary product of one photojournalist’s decade-long commitment, a gripping, courageous collection of portraits and interviews of those whose lives were crossed by radioactive fallout. For twelve years beginning in 1951, the United States government conducted above ground testing of nuclear weapons in the deserts of Nevada; for more than four decades following, it tried to cover up the human and environmental devastation wrought by this testing. In American Ground Zero, Carole Gallagher penetrated the veil of official secrecy and anonymity to document the incredible untold story of the Americans whose misfortune it was to live downwind of the nuclear detonations and of civilian workers and military personnel exposed to radiation at the Nevada Test Site.

Recommended by Dan Bouchard, Journals Production at the MIT Press: “Superb photography, compelling stories about people whose lives were crossed (and crossed out) by radioactive fallout.”

The Embodied Mind provides a unique, sophisticated treatment of the spontaneous and reflective dimension of human experience. The authors argue that only by having a sense of common ground between mind in Science and mind in experience can our understanding of cognition be more complete. Toward that end, they develop a dialogue between cognitive science and Buddhist meditative psychology and situate it in relation to other traditions such as phenomenology and psychoanalysis.

“An important book with wide-ranging implications for the construction of subjectivity in the Western tradition.” —N. Katherine Hayles, American Book Review

Sorting Things Out: Classification and Its Consequences by Geoffrey C. Bowker and Susan Leigh Star (1999)

What do a seventeenth-century mortality table; the identification of South Africans during apartheid as European, Asian, colored, or black; and the separation of machine- from hand-washables have in common? All are examples of classification—the scaffolding of information infrastructures. In Sorting Things Out, Geoffrey C. Bowker and Susan Leigh Star explore the role of categories and standards in shaping the modern world.

Recommended by Suraiya Jetha, Mellon University Press Diversity Fellow/Acquisitions Assistant at the MIT Press: “The introduction’s insights about classification helped me see the world (and my dissertation research!) in a whole new light.”

Sources of Power: How People Make Decisions by Gary Klein (1998)

We have all seen images of firefighters rescuing people from burning buildings and paramedics treating bombing victims. How do these individuals make the split-second decisions that save lives? Most studies of decision making, based on artificial tasks assigned in laboratory settings, view people as biased and unskilled. In this modern classic, Gary A. Klein proposes a naturalistic approach to decision making, which views people as gaining experience that then enables them to use a combination of intuition and analysis to make decisions. To illustrate this approach, Klein tells stories of people—from pilots to chess masters—acting under such real-life constraints as time pressure, high stakes, personal responsibility, and shifting conditions.

“Most studies of decision-making treat humans like rats in a laboratory. But Dr. Klein, a cognitive psychologist, spent a decade watching fire commanders, fighter pilots, paramedics, and others making split-second decisions on the job, and this book is a clear and engaging account of his findings.” —The Wall Street Journal

Chambers for A Memory Palace by Donlyn Lyndon and Charles W. Moore (1996)

This collaboration between two distinguished architects and former colleagues is a joyous celebration of admired places and a thoughtful consideration of the role that design has played in giving these places their memorable qualities. Chambers for a Memory Palace consists of an exchange of letters in which one author recalls and the other responds to the elements considered essential to the art of successful place-making. Each of the book’s chapters forms a chamber, and each chamber is inscribed with personal observations on the composition of places and the architectural elements central to each building, garden, court, monument, or open space described. The examples considered in these dialogues range from classic Western tradition to Asian temples and Islamic tombs, from ancient ruins to modern cities.

Recommended by Erin Hasley, Senior Designer at the MIT Press: “Chambers for a Memory Palace is a beautiful book designed by Yasuyo Iguchi. I bought it when it came out. It has a watercolor and line drawings inside. I remember it as letters exchanged back and forth from one coauthor to the other. They are thinking about architecture and a sense of place and reconstructing things from memory. Books like this made me know I wanted to work at the Press.”

Paul Krugman’s popular guide to the economic landscape of the 1990s was revised and updated in three editions. First published in 1990, the third and final edition includes new material on how risky behavior can lead to disaster in private markets; an evaluation of the Federal Reserve’s role in reining in economic growth to prevent inflation; a revised discussion of the federal budget deficit, including the growing concern that Social Security and Medicare payments to retiring baby boomers will threaten the solvency of the government. Finally, in the updated concluding section, the author provides three possible scenarios for the American economy in the 2000s. He warns that readers in the ’90s lived in an age of diminished expectations, in which the voting public would be willing to settle for policy drift—but with the first of the baby boomers turning 65 in 2011, the U.S. economy will not be able to drift indefinitely.

“The Age of Diminished Expectations is a remarkable achievement, a quick read that tells you much of what there is to know about the great economic issues of the day.” —The New York Times Book Review