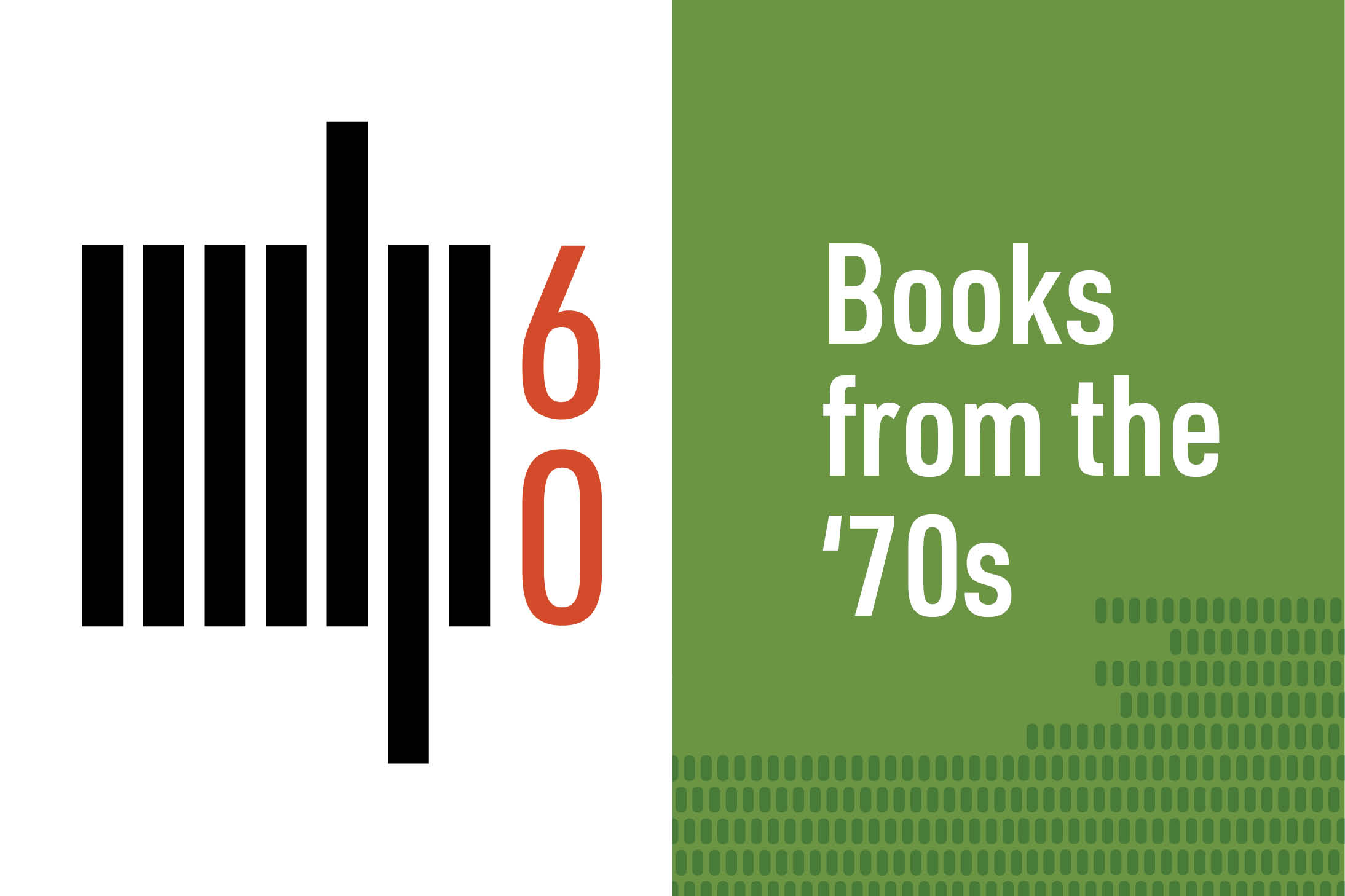 The MIT Press has long prided itself on amplifying unsung voices in academia, including female scholars who have historically been underrepresented and closed out from many key areas of study. March is Women’s History Month, and this year—with our 60th anniversary celebrations well under way—we are reminiscing on the incredible scholars we published in the 1970s. These women worked in diverse fields, from art to architecture and mathematics to history, but are united by the impactful work they all produced.

Explore these titles below and share your favorite MIT Press book with us at happy60mitp@mit.edu. Stay tuned throughout the year as we celebrate our 60th birthday, sharing pieces of Press history and selections of our books and work over the decades.

Read the first piece in this series, featuring our favorite book covers from the ‘60s.

The colorful lives of these groundbreaking women, who often traveled in the most avant-garde circles of their day, are presented in fascinating detail in Lynn M. Osen’s Women in Mathematics, first published in 1974. The obstacles and censures that were also a part of their lives are a sobering reminder of the bias against women still present in this and other fields of academic endeavor. Mathematicians, science historians, and general readers will find this book a lively history; women will find it a reminder of a proud tradition and a challenge to take their rightful place in academic life today.

Hunting for Dinosaurs by Zofia Kielan-Jaworowska (1970)

This book, written by the female leader of three successive paleontological expeditions organized by the Warsaw Academy of Sciences to probe sections of the Gobi Desert for fossil remains of dinosaurs, describes her adventures and those of her team members in entertaining and informative detail. The Gobi Desert, an inhospitable and lonely environment for human visitors, harbors a wealth of evidence concerning the changes in the fauna at the end of the Cretaceous and the beginning of the Tertiary eras. Kielan-Jaworowska describes in detail the painstaking preparations for the expedition, her impressions on first arriving in the arid regions to be investigated, and her success in locating and retrieving a large number of fossil remains which were to contribute substantially to the art and science of paleontology.

This book presents a detailed analysis of Soviet historiography of the Communist Party in the USSR after Khrushchev’s secret speech denouncing Stalin, a period that is roughly spanned by the Twentieth and Twenty-Third Party Congress, 1956 to 1966. The author uses source materials that she spent a number of years reading and translating—Soviet mass-edition texts and pamphlets, scholarly monographs, articles in historical journals and the popular press—to construct a schematic chronology of developments in political history and related political events under Khrushchev and his immediate successors.

Understanding through seeing only seems to be an obviously intuitive process. Donis A. Dondis argues in A Primer of Visual Literacy that developing the visual sense is something like learning a language, with its own special alphabet, lexicon, and syntax. Responding to the need she so clearly perceived, Dondis—a designer and teacher of broad experience—sought to provide a beginning text for art and design students and a basic text for all other students; those who do not intend to become artists or designers but who need to acquire the essential skills of understanding visual communication at a time when so much information is being studied and transmitted in non-verbal modes, especially through photography and film. People find it necessary to be verbally literate whether they are “writers” or not; they should find it equally necessary to be visually literate, “artists” or not.

Learning from Las Vegas created a healthy controversy on its appearance in 1972, calling for architects to be more receptive to the tastes and values of “common” people and less immodest in their erections of “heroic,” self-aggrandizing monuments. This revised edition, published in 1977, includes the full texts of Part I of the original on the Las Vegas strip; Part II, “Ugly and Ordinary Architecture, or the Decorated Shed,” a generalization from the findings of the first part on symbolism in architecture and the iconography of urban sprawl; and an added preface by Denise Scott Brown and a bibliography of writings by the members of Venturi and Rauch and about the firm’s work.

Language and Maturation by Paula Menyuk (1977)

Language and Maturation offers a unique perspective of the literature of language development at the time of the book’s publication. Beginning with an outline of the maturational changes that occur in linguistic knowledge in the period from birth to adulthood, it goes on to discuss the suggested causes for the changes and the controversies about the suggested causes. “I hope,” Paula Menyuk writes in her introduction, “that readers of this book, that is, those interested in language development and processing, will find the questions and answers presented so intriguing and challenging that they themselves will become engaged in in-depth studies of the questions of language and maturation.”

The Psychology of Reading by Eleanor J. Gibson and Harry Levin (1975)

In this book, two psychologists apply principles of cognitive psychology to understanding reading. Gibson and Levin present a consistent theoretical point of view and apply it to the acquisition of reading and what the skilled reader does. The Psychology of Reading concludes that reading cannot be understood simply as associative learning—that is, the learning of an arbitrary code connecting written symbols and their sounds. Reading involves higher-level mental processes such as the discovery of rules and order, and the extraction of structured, meaningful information.

From the time of its discovery, the new world was regarded by American settlers as a new Eden and a new Jerusalem. Although individual pioneers’ visions of paradise were inevitably corrupted by reality, some determined ideatists carved out enclaves in order to develop collective models of what they believed to be more perfect societies. All such communitarian groups consciously attempted to express their social ideals in their buildings and landscapes; invariably, ideological predispositions can be inferred from a close study of the environments they created. The interplay between ideology and architecture, the social design and the physical design of American utopian communities, is the basis of this remarkable book by Dolores Hayden.

“A phonologist ignores phonetics at his own peril,” wrote Professor Lehiste, whose work in acoustic phonetics and in historical and descriptive phonology in the 1960s resulted in this important experimental study of the linguistic function of suprasegmentals—speech features that are added over consonants and vowels, which can include rhythm, intonation, pitch, stress, and more. The author assembles and summarizes what was then known about the phonetic nature of suprasegmentals and evaluates the available evidence from the point of view of linguistic theory. She describes observed linguistic facts, seeks to explain them, and attempts to set up predictions. The book contains a great deal of painstakingly gathered evidence for the existence of speech patterns whose domain is larger than a segment and which, the author states, should form a part of linguistic theory.

Our thermal environment is as rich in cultural associations as our visual, acoustic, olfactory, and tactile environments. Thermal Delight in Architecture explores the potential for using thermal qualities as an expressive element in building design. At the time of the book’s publication, building technology and design favored high-energy-consuming mechanical methods of neutralizing the thermal environment and had not responded to the various ways that people use, remember, and care about the thermal environment and how they associate their thermal sense with their other senses. The hearth fire, the sauna, the Roman and Japanese baths, and the Islamic garden are discussed as archetypes of thermal delight about which rituals have developed—reinforcing bonds of affection and ceremony forged in the thermal experience. The contemporary emphasis on central heating systems and air conditioning and hermetically sealed buildings damaged our thermal coping and sensing mechanisms. With Thermal Delight in Architecture, Heschong sought to change the status quo and open up for readers a new dimension of architectural experience.