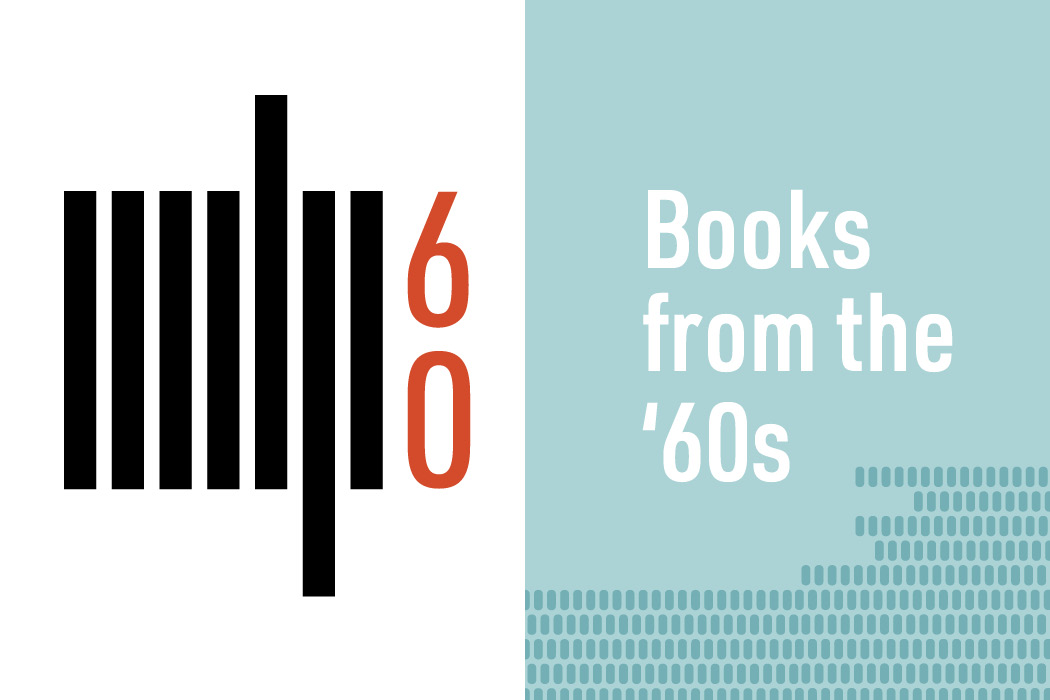 2022 marks the 60th anniversary of the MIT Press, born in 1962 out of expansion efforts from MIT’s original publishing arm, the Technology Press. In the years since, the MIT Press has grown into one of the largest and most distinguished university presses in the world and a leading global publisher of books and journals at the intersection of science, technology, art, social science, and design.

We’ll be celebrating our birthday throughout the year, beginning with a look back on some of our favorite book covers from our very first decade as the Press: the 1960s. Given the Press’s storied history in the field of design—not the least of which is due to our iconic former design director Muriel Cooper—it’s an apt place to start our retrospective. Explore the iconic cover designs below and send us a birthday greeting at happy60mitp@mit.edu.

What does the city’s form actually mean to the people who live there? What can the city planner do to make the city’s image more vivid and memorable to the city dweller? To answer these questions, Mr. Lynch, supported by studies of Los Angeles, Boston, and Jersey City, formulates a new criterion—imageability—and shows its potential value as a guide for the building and rebuilding of cities. The wide scope of this study leads to an original and vital method for the evaluation of city form. The architect, the planner, and certainly the city dweller will all want to read this book.

Cuba: Castroism and Communism, 1959-1966 surveys the course of events in Cuba from early revolutionary days to the complicated middle-sixties split in the international Communist camp. In this study, Andrés Suárez investigates some of the most fascinating questions about Cuba, and some of the most useful: Where did the Cuban revolution originate? Why did Castro choose an affiliation with the Soviet Union? What is Castro’s present strategy in managing his regime and in directing his pas de deux with the Soviets? The book is based on reports in the contemporary Cuban press and on the author’s personal experience as a member of the struggle against Batista and as an officer of the Cuban revolutionary government for almost two years; factually comprehensive and sound in judgment, it develops a consistent and illuminating picture of Castro and his government.

Planning for a Nation of Cities edited by Sam Bass Warner, Jr. (1966)

In a series of short, to-the-point reports and policy papers, this group of researchers goes directly to the sprawling and tangled problems of the still largely unexplored urban world. With a mixed sense of crisis and confidence, the “nation of cities” emerging on this continent is tentatively and provisionally mapped out by such well-known trail-blazers in this field as Gunnar Mydral, Jean Gottmnn, and John Dyckman. Among others. They confront the challenge of the city at the level of current planning, local and national. They look beyond the (necessary) first experiments and immediate expedients of urban renewal and the antipoverty program to the eventual trillion-dollar transformations that at this point can be discussed only in an attitude of scholarly detachment.

The Character of Physical Law by Richard Feynman (1967)

In these Messenger Lectures, originally delivered at Cornell University and recorded for television by the BBC, Richard Feynman offers an overview of selected physical laws and gathers their common features into one broad principle of invariance. He maintains at the outset that the importance of a physical law is not “how clever we are to have found it out, but… how clever nature is to pay attention to it,” and tends his discussions toward a final exposition of the elegance and simplicity of all scientific laws. Rather than an essay on the most significant achievements in modern science, The Character of Physical Law is a statement of what is most remarkable in nature.

God & Golem, Inc.: A Comment on Certain Points where Cybernetics Impinges on Religion by Norbert Wiener (1966)

The new and rapidly growing field of communication sciences owes as much to Norbert Wiener as to any one man. He coined the word for it—cybernetics. In God & Golem, Inc., the author concerned himself with major points in cybernetics which are relevant to religious issues.The first point he considers is that of the machine which learns. While learning is a property almost exclusively ascribed to the self-conscious living system, a computer now exists which not only can be programmed to play a game of checkers, but one which can “learn” from its past experience and improve on its own game. For a time, the machine was able to beat its inventor at checkers. “It did win,” writes the author, “and it did learn to win; and the method of its learning was no different in principle from that of the human being who learns to play checkers.”

Language consists of dispositions, socially instilled, to respond observably to socially observable stimuli. Such is the point of view from which a noted philosopher and logician examines, in this book, the notion of meaning and the linguistic mechanisms of objective reference. In the course of the discussion, Professor Quine pinpoints the difficulties involved in translation, brings to light the anomalies and conflicts implicit in our language’s referential apparatus, clarifies semantic problems connected with the imputation of existence, and marshals reasons for admitting or repudiating each of various categories of supposed objects. He argues that the notion of a language-transcendent “sentence meaning” must on the whole be rejected, and that meaningful studies in the semantics of reference can only be directed toward substantially the same language in which they are conducted.

Aspects of the Theory of Syntax by Noam Chomsky (1969)

New Directions In The Study Of Language edited by Eric H. Lenneberg (1966)

An excellent and readable cross section of language research at mid-century, New Directions in the Study of Language presents the viewpoint of the psychologist, biologist, and anthropologist in general discussions which highlight both new and unresolved problems deriving from the nature and origin of language. It is the broad and general context that is the concern of the contributors, rather than a reporting of specific research. Current and highly original opinions about language research are advanced in brief and readable presentations.

Fifty-three papers, dealing with many facets of the problem of modeling the perception of speech or visual form, are presented here with a view to focusing attention on the general principles of organization that underlie perception as a whole. The majority of the leading investigations in the fields of speech and vision—key areas in perception research—have contributed explicit statements of the ongoing activity in their respective fields, assessed the present status of theory and experiment, and presented new and meaningful models of broad application to the perception of speech and visual form.