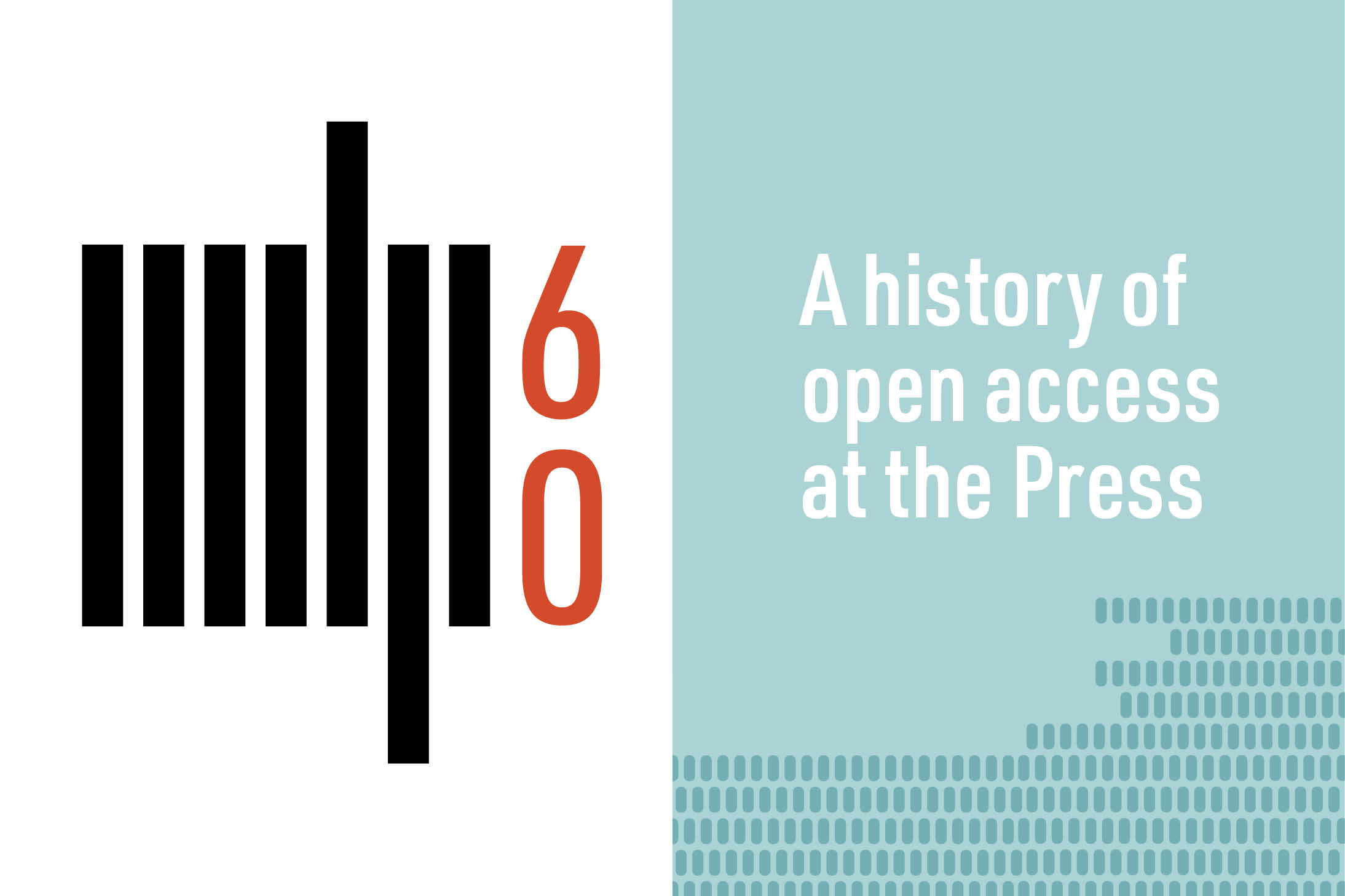 The MIT Press has long prided itself on its extensive forays into open access publishing, making important scholarship openly accessible to the public online. This year as the MIT Press celebrates its 60th anniversary, we also celebrate our 20-plus years as leaders in open access publishing. What better way to mark Open Access Week than to look back on how far we have come?

Explore the history of our major open access initiatives below, and read well-wishes from friends of the Press—and even add your own message—on our 60th anniversary website.

In 1995, we published City of Bits: Space, Place, and the Infobahn by William J. Mitchell in both physical and digital editions—the digital being freely available online to the public. With this first official open access publication, we entered a publishing space that we would continue to grow within and push the limits of for more than 20 years.

In 1999, The MIT Encyclopedia of Cognitive Science—a landmark reference work with more than 400 authors—was made available online as an accessible work-in-progress. This work would go on to form the framework for CogNet, an online community project that still exists today.

By the end of the millenium, the Press had established the Digital Projects Lab, to operationalize its experimental efforts in digital publishing.

The early 2000s brought into fruition CogNet, an online community for the cognitive sciences, and ArchNet, the analogous community for Islamic architecture. Both these communities were conceived of and developed by the Digital Projects Lab with the aim of making scholarship in these areas more accessible and interactive. Both projects are still in operation today.

In the 2010s, MIT Press launched the MIT Press Direct platform. This product is a platform for MIT Press’s journals and books to exist online digitally, with easy accessibility to readers through programs like Direct to Open.

The 2010s and early 2020s brought about the launch of several open access journals and the re-launch of flagship journals as newly-open access publications. In summer 2020, Rapid Reviews: COVID-19 (now Rapid Reviews: Infectious Diseases) launched as an open access publication offering pre-prints of key scholarship on the COVID-19 pandemic at a time when disinformation was running rampant. In January 2021, the long-running journal of the American Academy of Arts and Sciences, Daedalus, became open access, unlocking hundreds of essays and scholarship to new readers worldwide. And in 2023, the MIT Press will launch the Journal of Climate Resilience and Climate Justice as a new open access journal publishing in the climate justice field.

In 2021, the MIT Press launched Direct to Open (D2O), a platform that moves MIT Press scholarly books from a solely market-based, purchase model, where individuals and libraries buy single eBooks, to a collaborative, library-supported open-access model. Instead of purchasing a title once for a single collection, libraries now have the opportunity to fund them one time for the world through participant fees.

By 2022, our Direct to Open project had received enough support for the Press to open its full list of scholarly monographs. In this year the Press also rounded out its digital publications with its first born-digital publication, Shahzad Bashir’s A New Vision for Islamic Pasts and Futures, an interactive, open access book that offers view of Islam that goes beyond conventional approaches.