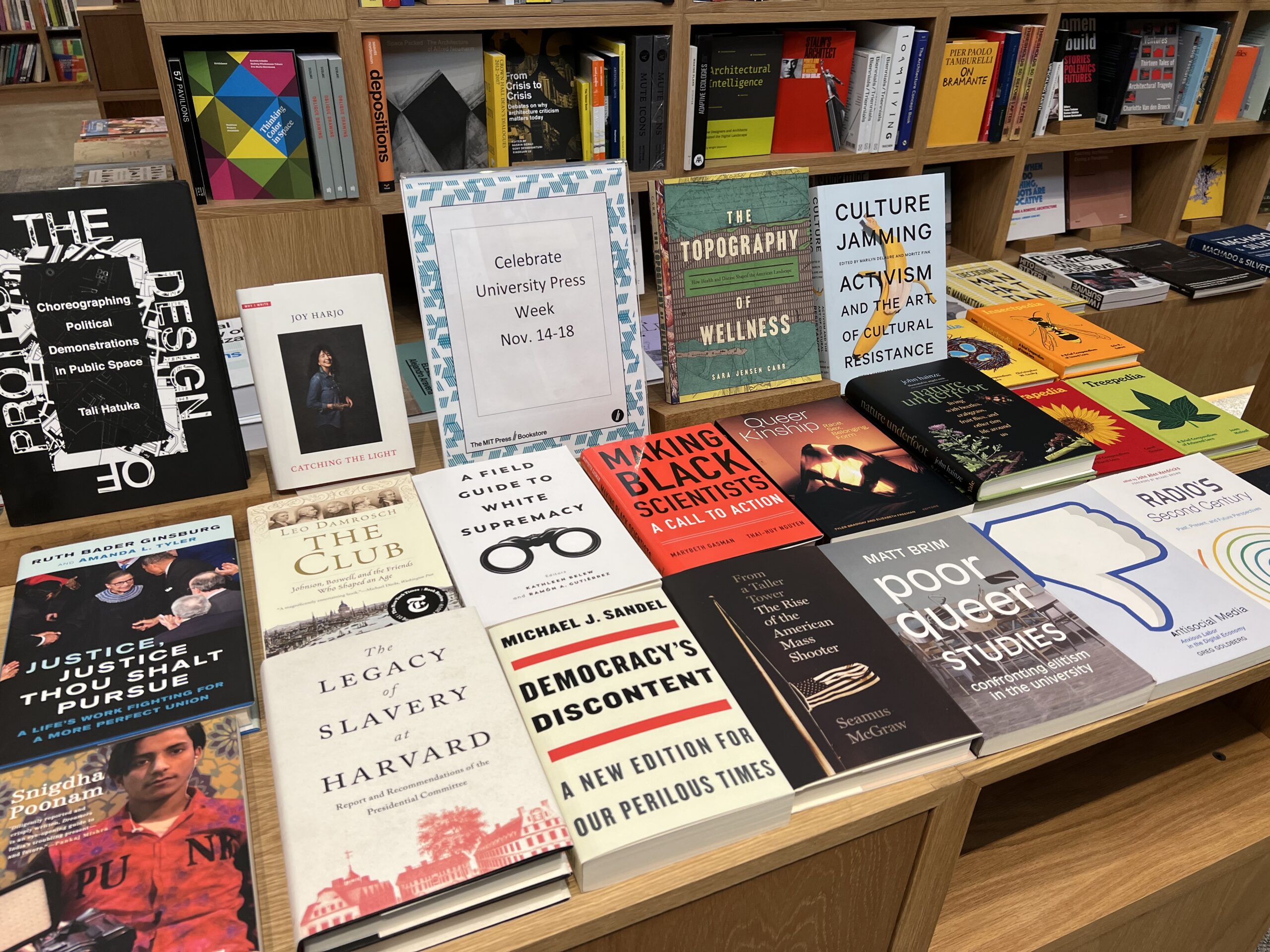 This week we celebrate University Press Week and all of the incredible ways that university presses contribute to their communities. The MIT Press Bookstore joins in the fanfare with several books on display from other UPs. Read on to learn more about the books on offer, or stop by the Bookstore at 314 Main Street in Cambridge’s Kendall Square this week to purchase.

In Poor Queer Studies Matt Brim shifts queer studies away from its familiar sites of elite education toward poor and working-class people, places, and pedagogies. Brim shows how queer studies also takes place beyond the halls of flagship institutions: in night school; after a three-hour commute; in overflowing classrooms at no-name colleges; with no research budget; without access to decent food; with kids in tow; in a state of homelessness.

The contributors to this volume assert the importance of queer kinship to queer and trans theory and to kinship theory. In a contemporary moment marked by the rising tides of neoliberalism, fascism, xenophobia, and homo- and cis-nationalism, they approach kinship as both a horizon and a source of violence and possibility. The contributors challenge dominant theories of kinship that ignore the devastating impacts of chattel slavery, settler colonialism, and racialized nationalism on the bonds of Black and Indigenous people and people of color.

From University of California Press:

In the fall of 2019, Justice Ruth Bader Ginsburg visited the University of California, Berkeley School of Law to deliver the first annual Herma Hill Kay Memorial Lecture in honor of her friend, the late Herma Hill Kay, with whom Ginsburg had coauthored the very first casebook on sex-based discrimination in 1974. Justice, Justice Thou Shalt Pursue is the result of a period of collaboration between Ginsburg and Amanda L. Tyler, a Berkeley Law professor and former Ginsburg law clerk. During Justice Ginsburg’s visit to Berkeley, she told her life story in conversation with Tyler. In this collection, the two bring together that conversation and other materials—many previously unpublished—that share details from Justice Ginsburg’s family life and long career.

A Field Guide to White Supremacy edited by Kathleen Belew and Ramon A. Gutierrez

Hate, racial violence, exclusion, and racist laws receive breathless media coverage, but such attention focuses on distinct events that gain our attention for twenty-four hours. The events are presented as episodic one-offs, unfortunate but uncanny exceptions perpetrated by lone wolves, extremists, or individuals suffering from mental illness—and then the news cycle moves on. If we turn to scholars and historians for background and answers, we often find their knowledge siloed in distinct academic subfields, rarely connecting current events with legal histories, nativist insurgencies, or centuries of misogynist, anti-Black, anti-Latino, anti-Asian, and xenophobic violence. But recent hateful actions are deeply connected to the past—joined not only by common perpetrators, but by the vast complex of systems, histories, ideologies, and personal beliefs that comprise white supremacy in the United States.

In recent years, scholars have documented extensive relationships between American higher education and slavery. The Legacy of Slavery at Harvard adds Harvard University to the long list of institutions, in the North and the South, entangled with slavery and its aftermath. The report, written by leading researchers from across the university, reveals hard truths about Harvard’s deep ties to Black and Indigenous bondage, scientific racism, segregation, and other forms of oppression.

The 1990s were a heady time. The Cold War had ended, and America’s version of liberal capitalism seemed triumphant. And yet, amid the peace and prosperity, anxieties about the project of self-government could be glimpsed beneath the surface. So argued Michael Sandel, in his influential and widely debated book Democracy’s Discontent, published in 1996. Now, a quarter century later, Sandel updates his classic work for an age when democracy’s discontent has hardened into a country divided against itself. In this new edition, he extends his account of America’s civic struggles from the 1990s to the present. He shows how Democrats and Republicans alike embraced a version of finance-driven globalization that created a society of winners and losers and fueled the toxic politics of our time.

Educators, research scientists, and college administrators have all called for a new commitment to diversity in the sciences, but most universities struggle to truly support black students in these fields. Historically black colleges and universities (HBCUs) are different, though. Marybeth Gasman, widely celebrated as an education-reform visionary, and Thai-Huy Nguyen show that many HBCUs have proven adept at helping their students achieve in the sciences. There is a lot we can learn from these exemplary schools.

Not long ago, the Solar System was the only example of a planetary system—a star and the bodies orbiting it—that we knew. Now, we know thousands of planetary systems, and have even been able to observe planetary systems at the moment of their birth. This Very Short Introduction explores this new frontier, incorporating the latest research. The book takes the reader on a journey through the grand sweep of time, from the moment galaxies begin to form after the Big Bang to trillions of years in the future when the Universe will be a dilute soup of dim galaxies populated mostly by red dwarf stars.

If you wanted to build a machine that would distribute propaganda to millions of people, distract them from important issues, energize hatred and bigotry, erode social trust, undermine respectable journalism, foster doubts about science, and engage in massive surveillance all at once, you would make something a lot like Facebook. Of course, none of that was part of the plan. In this fully updated paperback edition of Antisocial Media, Siva Vaidhyanathan explains how Facebook devolved from an innocent social site hacked together by Harvard students into a force that, while it may make personal life just a little more pleasurable, makes democracy a lot more challenging.

Florapedia is an eclectic A–Z compendium of botanical lore. With more than 100 enticing entries—on topics ranging from achlorophyllous plants that use a fungus as an intermediary to obtain nutrients from other plants to zygomorphic flowers that admit only the most select pollinators—this collection is a captivating journey into the realm of botany.

Birdpedia is an engaging illustrated compendium of bird facts and birding lore. Featuring nearly 200 entries—on topics ranging from plumage and migration to birds in art, literature, and folklore—this enticing collection is brimming with wisdom and wit about all things avian.

Insectpedia introduces you to the wonders of the insect world while inviting you to make discoveries of your own. Featuring dozens of entries on topics ranging from murder hornets and the “insect apocalypse” to pioneering entomologists such as Margaret James Strickland Collins and Douglas Tallamy, this beautifully illustrated, pocket-friendly encyclopedia dispels many common myths about insects while offering new perspectives on the vital relationships we share with these incredible creatures.

Treepedia is an entertaining and fact-filled illustrated compendium of tree lore. Featuring nearly 100 entries—on topics ranging from tree ecology and conservation to the role of trees in religion, literature, art, and movies—this enticing collection is a celebration of all things arboreal.

From University of Texas Press:

From a Taller Tower by Seamus McGraw

We, as a nation, have become desensitized to the shock and pain in the wake of mass shootings. In the bottomless silence between gunshots, as political stalemate ensures inaction, the killing continues; the dying continues. From a Taller Tower attends to the silence that has left us empty in the aftermath of these atrocities. Veteran journalist Seamus McGraw chronicles the rise of the mass shooter to dismantle the myths we have constructed around the murderers and ourselves.

The Design of Protest by Tali Hatuka

Public protests are a vital tool for asserting grievances and creating temporary, yet tangible, communities as the world becomes more democratic and urban in the twenty-first century. While the political and social aspects of protest have been extensively studied, little attention has been paid to the physical spaces in which protests happen. Yet place is a crucial aspect of protests, influencing the dynamics and engagement patterns among participants. In The Design of Protest, Tali Hatuka offers the first extensive discussion of the act of protest as a design: that is, a planned event in a space whose physical geometry and symbolic meaning are used and appropriated by its organizers, who aim to challenge socio-spatial distance between political institutions and the people they should serve.

From University of Virginia Press:

The Topography of Wellness by Sara Jensen Carr

The COVID-19 pandemic has reignited discussions of how architects, landscape designers, and urban planners can shape the environment in response to disease. This challenge is both a timely topic and one with an illuminating history. In The Topography of Wellness, Sara Jensen Carr offers a chronological narrative of how six epidemics transformed the American urban landscape, reflecting changing views of the power of design, pathology of disease, and the epidemiology of the environment.

Why the Museum Matters by Daniel Weiss

Art museums have played a vital role in our culture, drawing on Enlightenment ideals in shaping ideas, advancing learning, fostering community, and providing spaces of beauty and permanence. In this thoughtful and often personal volume, Daniel H. Weiss contemplates the idea of the universal art museum alongside broad considerations about the role of art in society and what defines a cultural experience. The future of art museums is far from secure, and Weiss reflects on many of the difficulties these institutions face, from their financial health to their collecting practices to the audiences they engage to ensuring freedom of expression on the part of artists and curators.

Catching the Light by Joy Harjo

In this lyrical meditation about the why of writing poetry, Joy Harjo reflects on significant points of illumination, experience, and questioning from her fifty years as a poet. Composed of intimate vignettes that take us through the author’s life journey as a youth in the late 1960s, a single mother, and a champion of Native nations, this book offers a fresh understanding of how poetry functions as an expression of purpose, spirit, community, and memory—in both the private, individual journey and as a vehicle for prophetic, public witness.

The Club by Leo Damrosch

In 1763, the painter Joshua Reynolds proposed to his friend Samuel Johnson that they invite a few friends to join them every Friday at the Turk’s Head Tavern in London to dine, drink, and talk until midnight. Eventually the group came to include among its members Edmund Burke, Adam Smith, Edward Gibbon, and James Boswell. It was known simply as “the Club.” In this captivating book, Leo Damrosch brings alive a brilliant, competitive, and eccentric cast of characters. With the friendship of the “odd couple” Samuel Johnson and James Boswell at the heart of his narrative, Damrosch conjures up the precarious, exciting, and often brutal world of late eighteenth‑century Britain. This is the story of an extraordinary group of people whose ideas helped to shape their age, and our own.