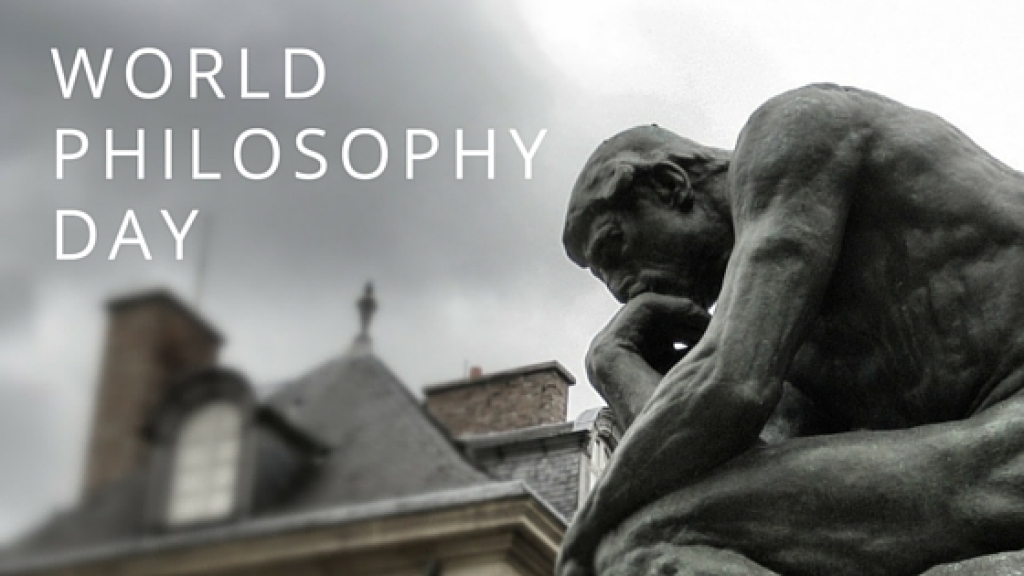 It’s that time of year again: November 15 is World Philosophy Day! Help us celebrate by checking out some of our many philosophy titles from the past few years. 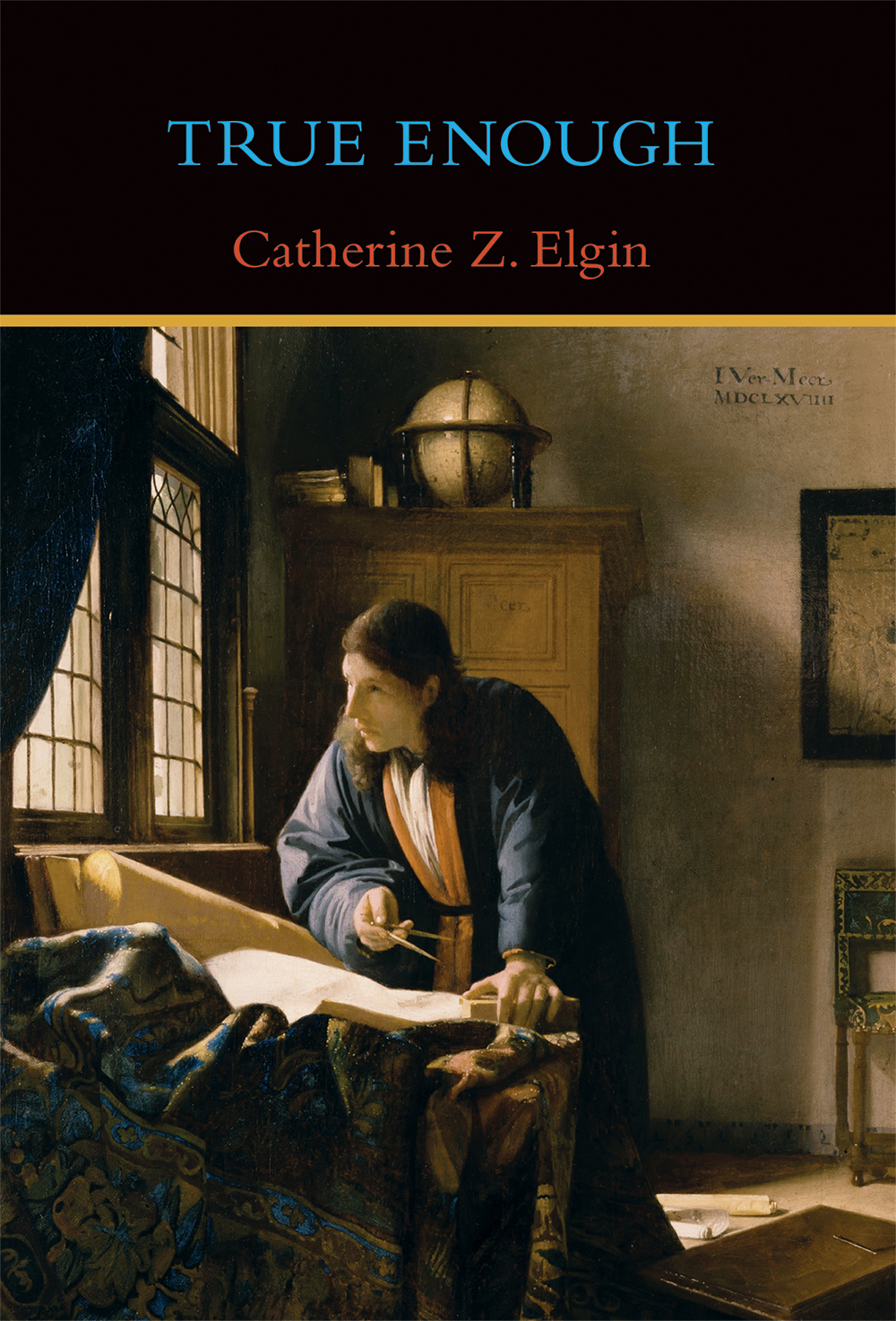 The development of an epistemology that explains how science and art embody and convey understanding.

Philosophy valorizes truth, holding that there can never be epistemically good reasons to accept a known falsehood, or to accept modes of justification that are not truth conducive. How can this stance account for the epistemic standing of science, which unabashedly relies on models, idealizations, and thought experiments that are known not to be true? In True Enough, Catherine Elgin argues that we should not assume that the inaccuracy of models and idealizations constitutes an inadequacy. To the contrary, their divergence from truth or representational accuracy fosters their epistemic functioning. When effective, models and idealizations are, Elgin contends, felicitous falsehoods that exemplify features of the phenomena they bear on. Because works of art deploy the same sorts of felicitous falsehoods, she argues, they also advance understanding.

Elgin develops a holistic epistemology that focuses on the understanding of broad ranges of phenomena rather than knowledge of individual facts. Epistemic acceptability, she maintains, is a matter not of truth-conduciveness, but of what would be reflectively endorsed by the members of an idealized epistemic community—a quasi-Kantian realm of epistemic ends.

A Mark of the Mental: In Defense of Informational Teleosemantics by Karen Neander 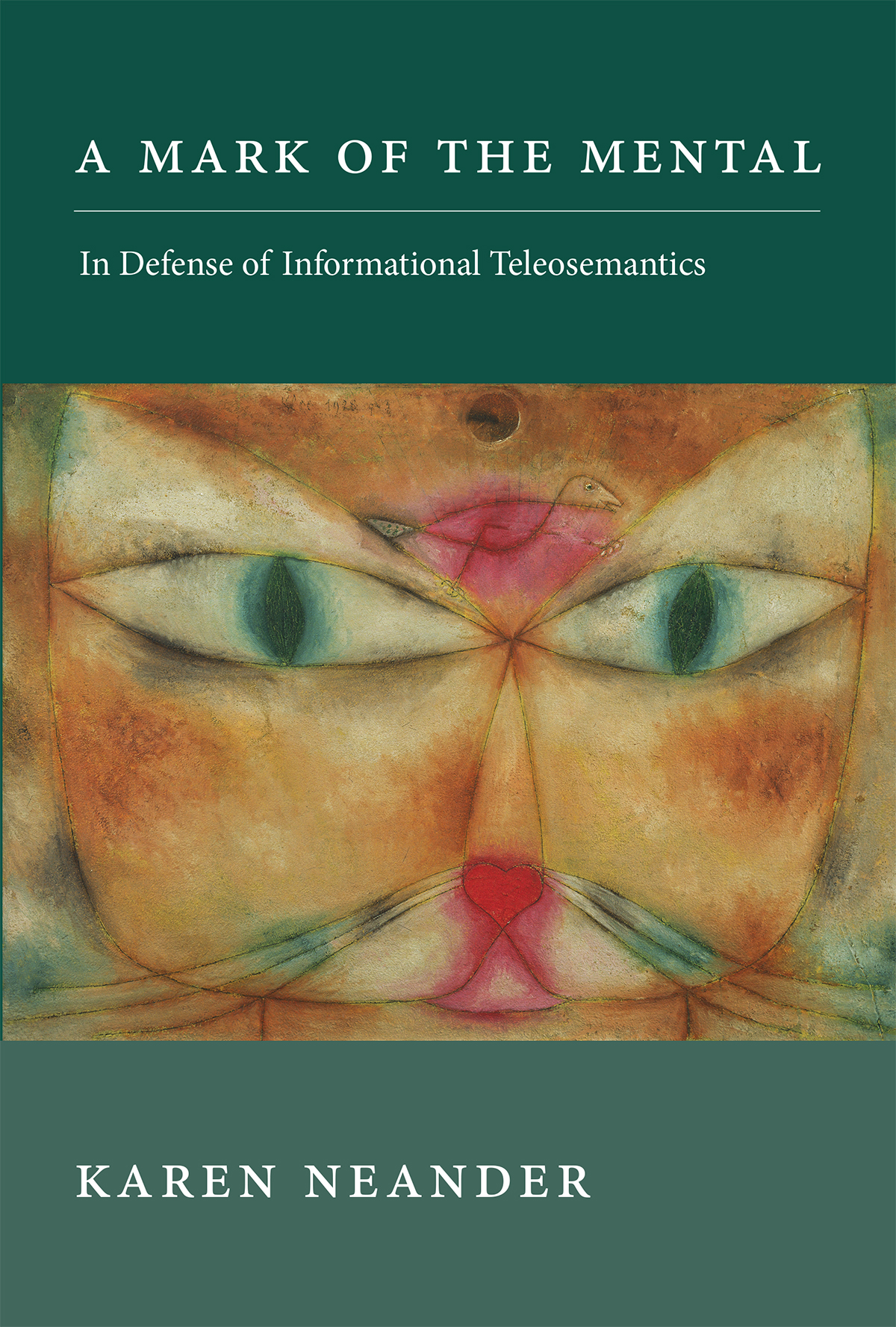 Drawing on insights from causal theories of reference, teleosemantics, and state space semantics, a theory of naturalized mental representation.

In A Mark of the Mental, Karen Neander considers the representational power of mental states—described by the cognitive scientist Zenon Pylyshyn as the “second hardest puzzle” of philosophy of mind (the first being consciousness). The puzzle at the heart of the book is sometimes called “the problem of mental content,” “Brentano’s problem,” or “the problem of intentionality.” Its motivating mystery is how neurobiological states can have semantic properties such as meaning or reference. Neander proposes a naturalistic account for sensory-perceptual (nonconceptual) representations.

Neander draws on insights from state-space semantics (which appeals to relations of second-order similarity between representing and represented domains), causal theories of reference (which claim the reference relation is a causal one), and teleosemantic theories (which claim that semantic norms, at their simplest, depend on functional norms). She proposes and defends an intuitive, theoretically well-motivated but highly controversial thesis: sensory-perceptual systems have the function to produce inner state changes that are the analogs of as well as caused by their referents. Neander shows that the three main elements—functions, causal-information relations, and relations of second-order similarity—complement rather than conflict with each other. After developing an argument for teleosemantics by examining the nature of explanation in the mind and brain sciences, she develops a theory of mental content and defends it against six main content-determinacy challenges to a naturalized semantics.

Understanding Ignorance: The Surprising Impact of What We Don’t Know by Daniel Denicola 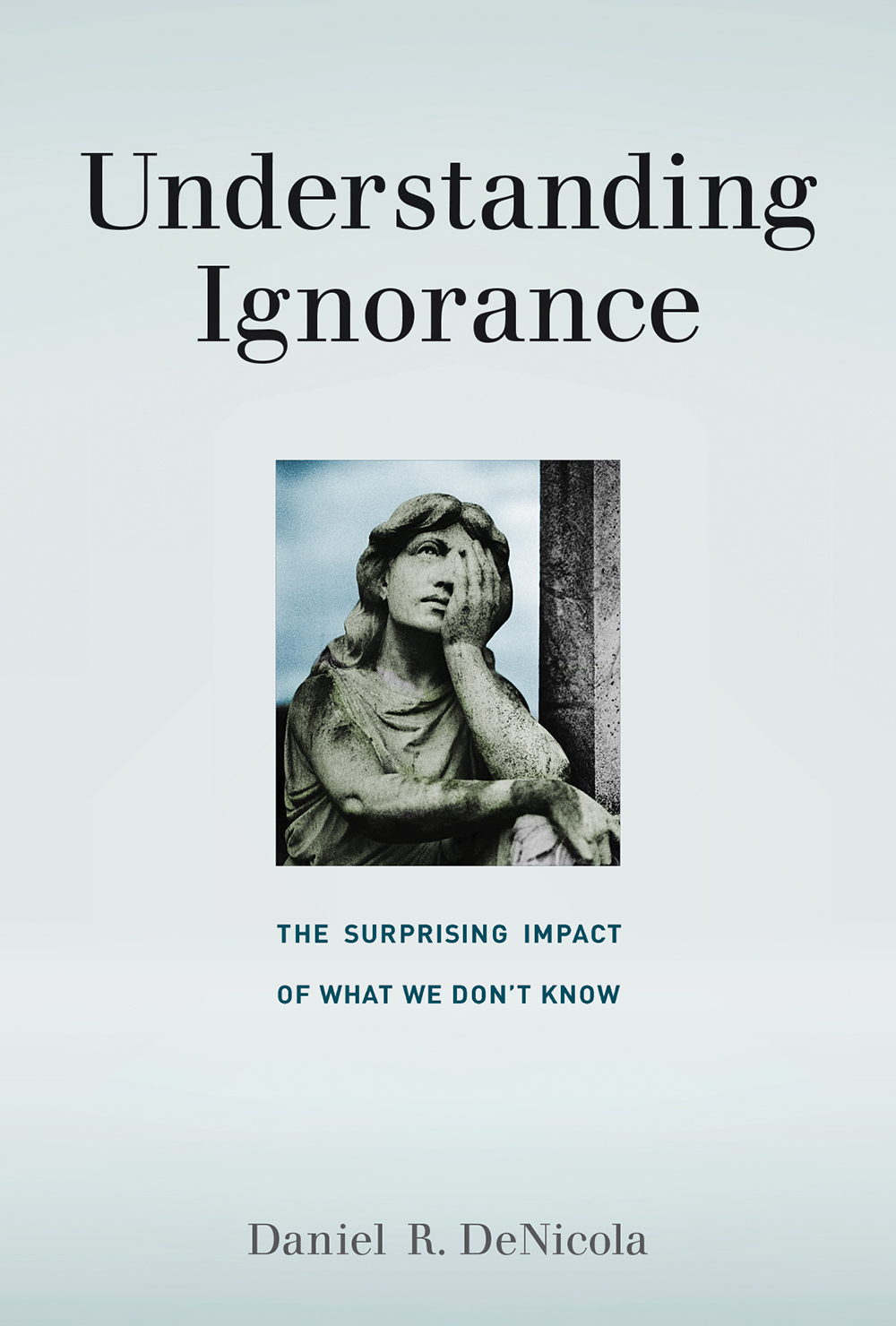 An exploration of what we can know about what we don’t know: why ignorance is more than simply a lack of knowledge.

Ignorance is trending. Politicians boast, “I’m not a scientist.” Angry citizens object to a proposed state motto because it is in Latin, and “This is America, not Mexico or Latin America.” Lack of experience, not expertise, becomes a credential. Fake news and repeated falsehoods are accepted and shape firm belief. Ignorance about American government and history is so alarming that the ideal of an informed citizenry now seems quaint. Conspiracy theories and false knowledge thrive. This may be the Information Age, but we do not seem to be well informed. In this book, philosopher Daniel DeNicola explores ignorance—its abundance, its endurance, and its consequences.

Ignorance is neither pure nor simple. It is both an accusation and a defense (“You are ignorant!” “Yes, but I didn’t know!”). Its practical effects range from the inconsequential to the momentous. It is a scourge, but, DeNicola argues daringly, it may also be a refuge, a value, even an accompaniment to virtue.

German Philosophy: A Dialogue by Alain Badiou and Jean-Luc Nancy 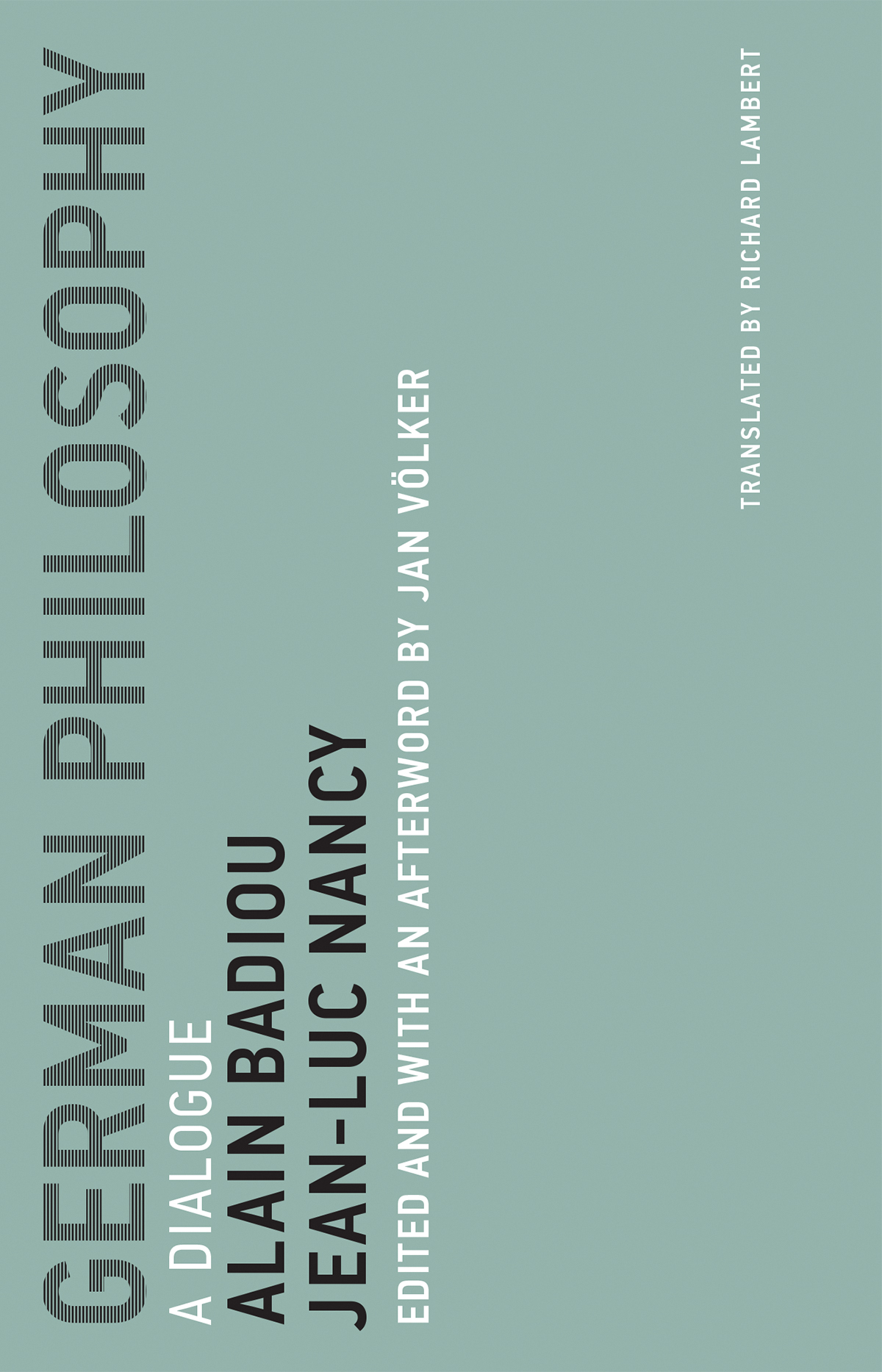 In this book, Alain Badiou and Jean-Luc Nancy, the two most important living philosophers in France, discuss German philosophy from a French perspective. Written in the form of a dialogue, and revised and expanded from a 2016 conversation between the two philosophers at the Universität der Künste Berlin, the book offers not only Badiou’s and Nancy’s reinterpretations of German philosophers and philosophical concepts, but also an accessible introduction to the greatest thinkers of German philosophy. Badiou and Nancy discuss and debate such topics as the legacies of Kant, Hegel, and Marx, as well as Nietzsche, Adorno, Fichte, Schelling, and the unavoidable problem of Heidegger and Nazism. The dialogue is contentious, friendly, and often quotable, with strong—at times passionate—positions taken by both Badiou and Nancy, who find themselves disagreeing over Kant, for example, and in unexpected agreement on Marx, for another.

What does it mean, then, to conduct a dialogue on German philosophy from a French perspective? As volume editor Jan Völker observes, “German philosophy” and “French philosophy” describe complex constellations that, despite the reference to nation-states and languages, above all encompass shared concepts and problems—although these take a range of forms. Perhaps they can reveal their essential import only in translation.

The Adventure by Giorgio Agamben 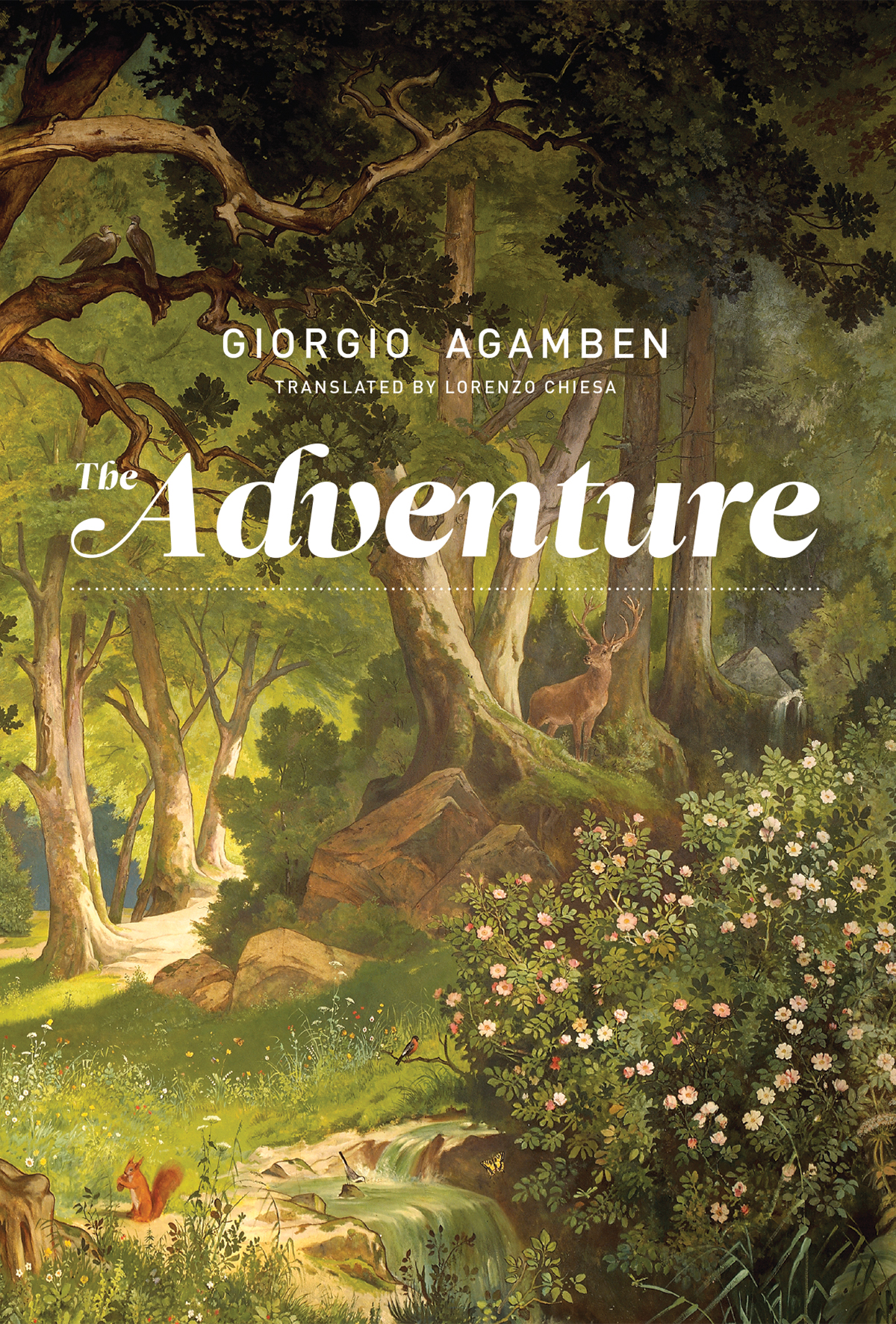 Agamben charts a journey that ranges from poems of chivalry to philosophy, from Yvain to Hegel, from Beatrice to Heidegger.

An ancient legend identifies Demon, Chance, Love, and Necessity as the four gods who preside over the birth of every human being. We must all pay tribute to these deities and should not try to elude or dupe them. To accept them, Giorgio Agamben suggests, is to live one’s life as an adventure—not in the trivial sense of the term, with lightness and disenchantment, but with the understanding that adventure, as a specific way of being, is the most profound experience in our human existence. In this pithy, poetic, and compelling book, Agamben maps a journey from poems of chivalry to philosophy, from Yvain to Hegel, from Beatrice to Heidegger. The four gods of legend are joined at the end by a goddess, the most elusive and mysterious of all: Elpis, Hope. In Greek mythology, Hope remains in Pandora’s box, not because it postpones its fulfillment to an invisible beyond but because somehow it has always been already satisfied. Here, Agamben presents Hope as the ultimate gift of the human adventure on Earth.

Topology of Violence by Byung-Chul Han 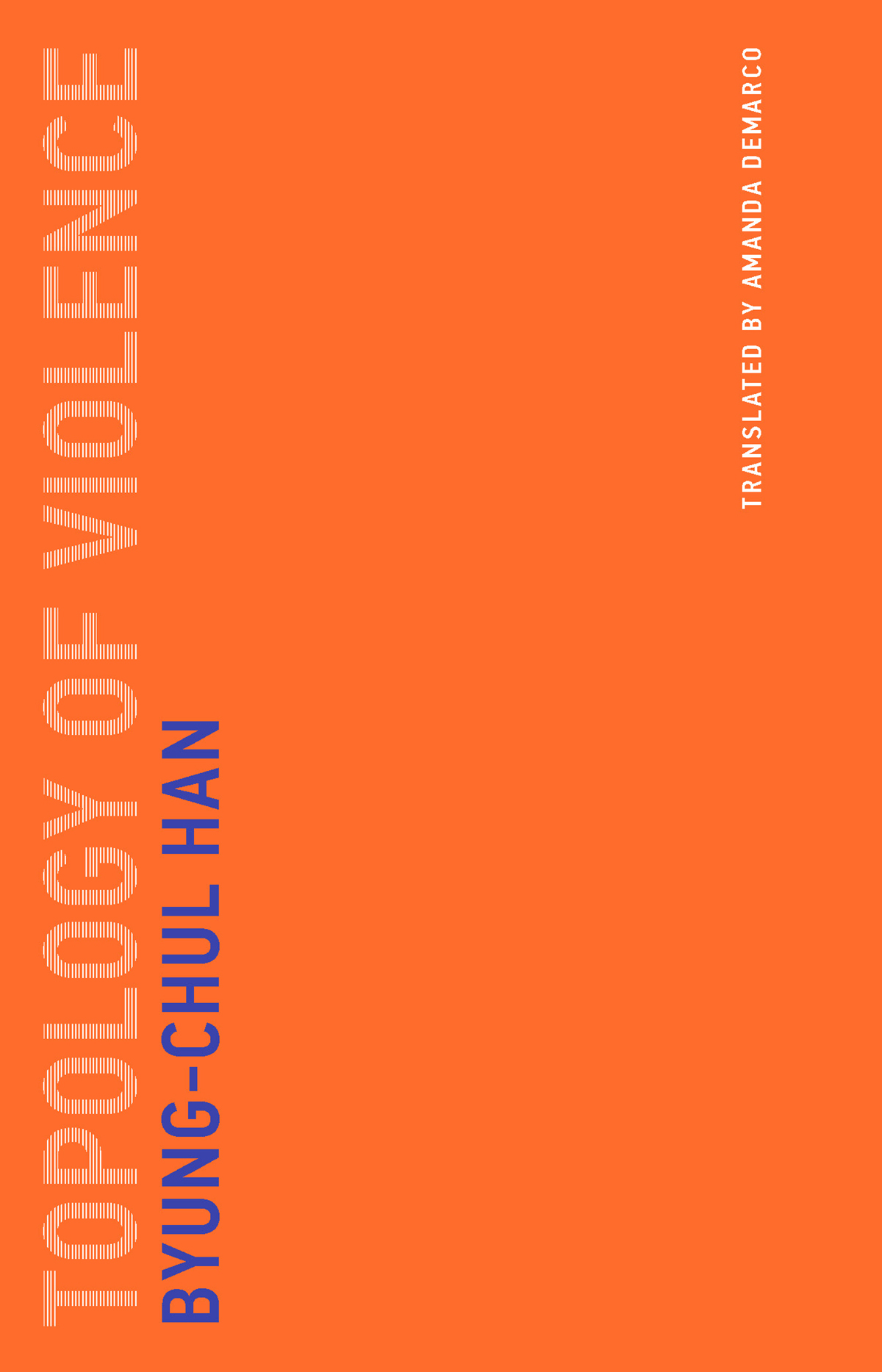 One of today’s most widely read philosophers considers the shift in violence from visible to invisible, from negativity to excess of positivity.

Some things never disappear—violence, for example. Violence is ubiquitous and incessant but protean, varying its outward form according to the social constellation at hand. In Topology of Violence, the philosopher Byung-Chul Han considers the shift in violence from the visible to the invisible, from the frontal to the viral to the self-inflicted, from brute force to mediated force, from the real to the virtual. Violence, Han tells us, has gone from the negative—explosive, massive, and martial—to the positive, wielded without enmity or domination. This, he says, creates the false impression that violence has disappeared. Anonymized, desubjectified, systemic, violence conceals itself because it has become one with society.