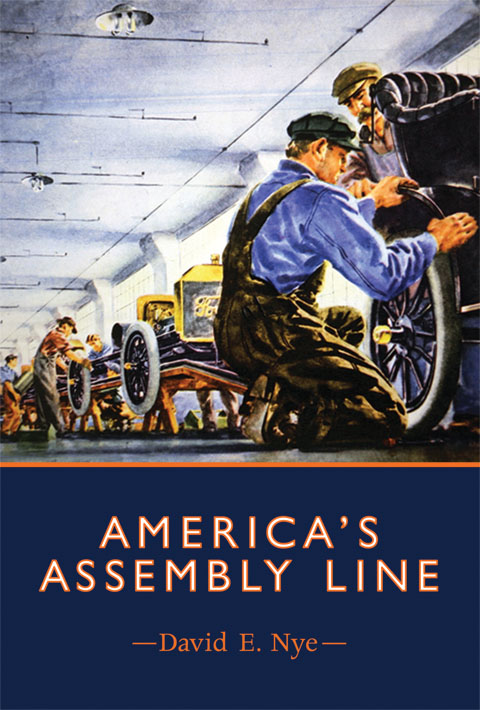 This year marks the 100th anniversary of the American assembly line. And by this day in 1913, 140 workers were placed along a 150-foot chassis line at Highland Park, a Ford Motor Co. plant located just north of Detroit that became the first automobile production facility to implement the assembly line. David Nye, author of America’s Assembly Line, shares these thoughts and reflections on the centenary and the continuing evolution of the assembly line:

The American Assembly line is one hundred years old. Exactly when to mark its birthday is a little in doubt, as the experiments that led to the assembly line began at the Ford Motor Company in April 1913 and the managers had no name for the emerging system until after it emerged. That spring and summer automobile parts were assembled on some short, experimental lines. In September Ford prepared to do final car assembly. The new form of production had become a conscious goal. Workmen strung out in a line, with the cars moving past each work station, turned out to be far more efficient than previous methods.

The assembly line seems in retrospect to be an obvious technology. Why didn’t the manufacturing technique of subdividing the tasks of production and lining them up in the order of assembly emerge much sooner? There are many interconnected factors that explain why the assembly line emerged when it did and not before, but three were particularly important.

First, parts must be absolutely interchangeable, or else they do not fit together. Machine tools that made parts had to be extremely accurate before this was possible. Eli Whitney envisioned the advantages and convinced Thomas Jefferson to support his efforts to make identical parts for muskets. However, American armories and other manufacturers such as those making sewing machines struggles for most of the nineteenth century to achieve the precision necessary for an assembly line.

Second, in order to arrange machines and processes in an assembly line order the source of power must be extremely flexible. This was not the case in steam-driven factories, where power came steam pipes and from overhead line shafts, belts and gears. The further steam was from its source, the less powerful it became. As a drive shaft and gear system grew longer, more and more energy was needed just to keep it turning at all. The power train in such a factory was not flexible, and therefore steam power was not well suited to experiments in manufacturing design. In contrast, electric motors, furnaces, and lights could be placed anywhere, and machines in an electrified factory could be placed in any order desired.

Third, an assembly line is expensive to set up, and it makes no economic sense to invest so much capital in one unless a large market exists, a market willing to purchase a single product.  The United States developed such a mass market, in contrast to Europe, where trade barriers balkanized the market. In France, Britain and Germany, there was a “class market” that demanded differentiated products that appealed to different segments of a smaller pool of consumers.  After 1914 European manufacturers visited Detroit to study the assembly line, but few industries could build comparable factories because Europe was not yet a mass market.

Aside from these three factories, an assembly line required sub-division of the labor into tasks of equal length, which deskilled much of the work force. It demanded that workers repeat a few actions, and annual Ford employee turnover rose to over 300 percent in 1913. In response, the company introduced the $5 Day, doubling the average wage. Not only did the higher wages keep people on the job, but workers with higher wages could afford to buy the products of mass production.

By the early 1920s half of all the automobiles in the world were Fords, Henry Ford was a billionaire, and his factory workers were among the highest paid in the world. Thus emerged a system of production that almost miraculously was able to increase production, raise profits, and pay higher wages, all at the same time. Henry Ford’s ghostwritten My Life and Work became an international bestseller. It briefly seemed that the assembly line would lift humanity to a new level of leisure and prosperity. The Boston department store owner, Edward Filene declared.

Mass production is not simply large-scale production. It is large-scale production based upon a clear understanding that increased production demands increased buying, and that the greatest total profits can be obtained only if the masses can and do enjoy a higher and ever higher standard of living. For selfish business reasons, therefore, genuine mass production industries must make prices lower and lower and wages higher and higher, while constantly shortening the workday and bringing to the masses not only more money but more time. . . .

The story of the assembly line in subsequent decades was not quite what Filene imagined, for it was also an efficient method for producing tanks and bombers. Moreover, as the assembly line was adopted worldwide it often drove down wages rather that raising them. In the Cold War, the assembly line became a symbol of American prosperity, yet at the same time many feared technological unemployment. Meanwhile, Japanese corporations reinvented the assembly line as lean production, which was then re-exported to the United States.

The assembly line is still evolving as a system of production, today largely monitored and controlled by computers and “manned” by robots. It has become inseparable from central political and social issues such as automation, unemployment, American competitiveness, resource depletion and global warming. At its centennial, the assembly line is being reconceived as a green technology based on recycling and alternative energies.

These and other topics are further explored in America’s Assembly Line.