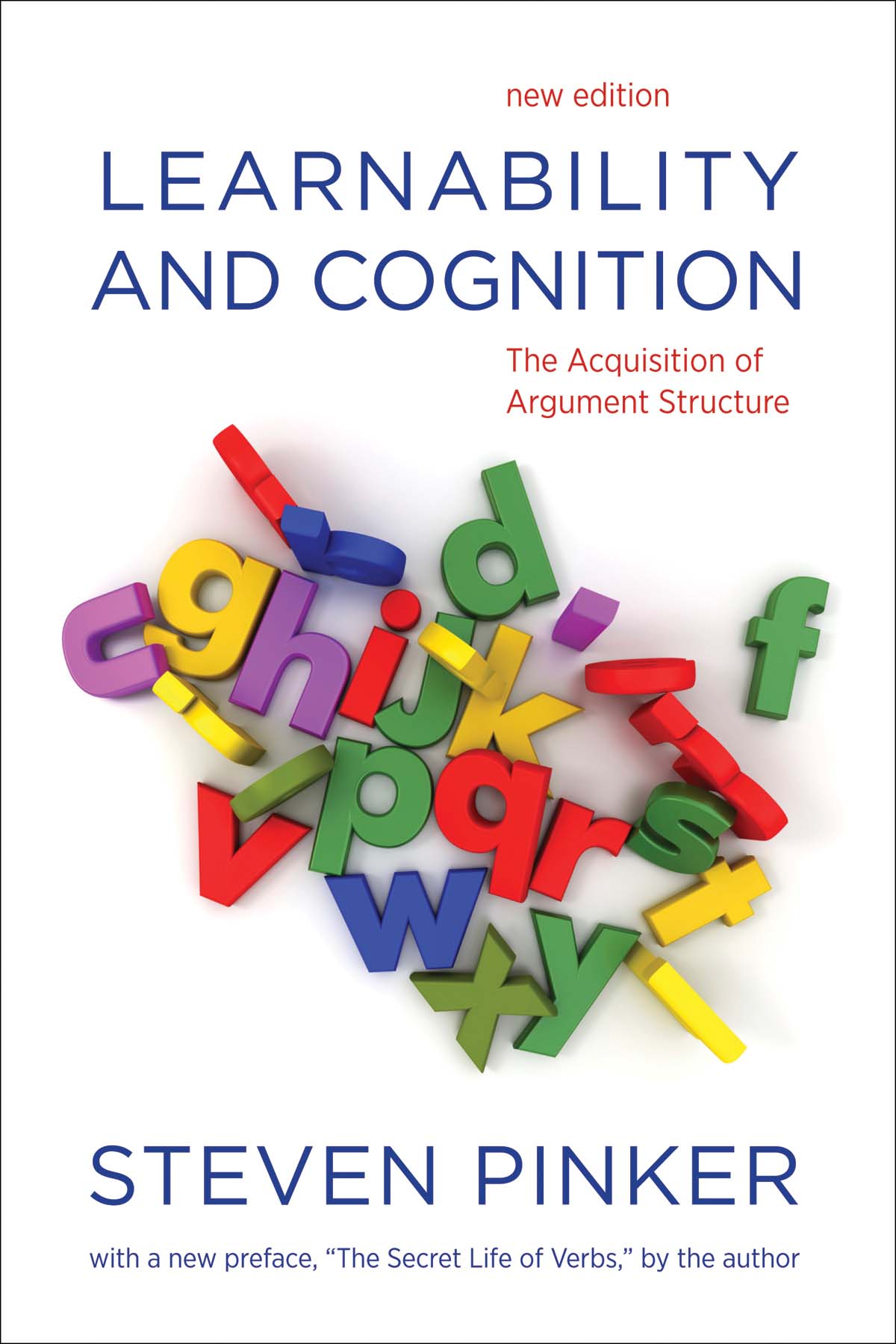 The Classic Reissue series highlights new editions of four long-time MIT Press classics and will run each Friday over the next month.

Long before Steven Pinker made a name for himself as a best-selling author of language, mind, and human nature books for the general audience and appeared on the Colbert Report, he wrote several technical monographs on language acquisition, including Learnability and Cognition: The Acquisition of Argument Structure published by the MIT Press in 1989. Last May, we released a new edition of the book that includes an original preface from Pinker himself. Senior Acquisitions Editor Philip Laughlin expressed these sentiments on the author, the book, and the reissue:

Steve Pinker is arguably the most famous author ever published by the MIT Press. In the 1980s, he edited two collections with us: one on visual cognition and another on connectionist modeling. His third and last book for the Press was a substantial monograph on his favorite topic: how children learn to use verbs. Since publishing those three books, Steve has gone on to become an academic superstar, a public intellectual, and a best-selling author with trade publishers such as Norton, Penguin, and Random House. Although his books with us only sold modestly compared to his latest blockbusters, I was hoping that he would have a sentimental attachment to his 1989 monograph Learnability and Cognition and might agree to revise it for us. Although Steve couldn’t commit to revising the book he said he would be delighted to write a new preface. Good enough for me, I told him. With just a few pages of new text, we were able to completely redesign the interior of the book, give it a splashy new cover, and create a Kindle edition. And Steve was able to proudly announce the new publication to his legions of Twitter followers. An old book that was buried on our backlist has now been given new life and is selling better today than it has in years. Perhaps it’s true that “content is king” but I think it’s also true that even kings like to be re-engineered, re-designed, and re-publicized.

The following excerpt from the preface of the new edition, “The Secret Life of Verbs,” poignantly illustrates Pinker’s claim that “even the driest examination of a technical phenomenon in an obscure academic subfield can shed light on the raciest dimensions of human experience”:

Verbs, I maintain, are a window into the human mind, and not just the bloodless Kantian categories of causation, space, matter, and time. One semantic analysis that ended up on the cutting-room floor for this book…was that of the verbs of sexual intercourse. Have you ever wondered why all the transitive verbs, for the act of love are obscene, offensive, or jocular? (Think about it.) Or why all the genteel and printable verbs are intransitive, using prepositions like with or to? Indeed, most of all the polite verbs for sex don’t even have their own root but consist of idioms with light verbs such as make, have, be, or go.

The major claim of the book you are holding is that every argument structure chooses its verbs from a set of narrow-range classes, each with a meaning that is conceptually compatible with it (if only metaphorically). Using this principle, can we discover anything about human sexuality from the syntax of the verbs for sex—the “copulative verbs,” in a sense very different from the one found in traditional grammar?