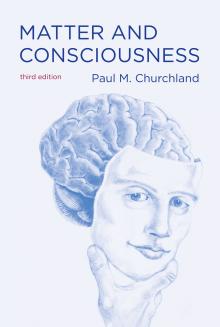 Matter and Consciousness by Paul Churchland, first published by the MIT Press in 1984, is an authoritative book that continues to set the standard for introductory texts for issues in philosophy of mind, despite the many years since its initial publication. We reissued a new (third) edition in August. Senior Acquisitions Editor Philip Laughlin shared these reflections on his first encounter with the text and the revision:

Paul Churchland’s Matter and Consciousness, 2/e was the first MIT Press book I ever read. In the spring semester of 1991, I was taking a seminar class at The New School called “Models of the Mind” and the first reading assignment was chapters 1-5 of Matter and Consciousness. (The secondary reading that week was Gilbert Ryle’s The Concept of Mind, Donald Davidson’s Essays on Actions and Events, and Karl Popper and John Eccles’ The Self and Its Brain). I’ll admit, Paul’s book unnerved me. The cover alone—a human face being stripped away from a brain—was particularly spooky. And his arguments in favor of “eliminative materialism” struck me as an attempt to prove that the human mind did not exist. (Later, as I grew acquainted with the writings of Richard Rorty, I realized that Paul was simply attempting to replace a certain kind of philosophical vocabulary with another, not eliminate the human mind!) Even so, the experience of reading that slim, austere book stuck with me for many years.

When I was hired by the MIT Press in the summer of 2009, I decided to mark the event by dusting off my old copy of Matter and Consciousness and re-reading it with fresh eyes.  It seemed a lot less scary and a lot more sensible in 2009 than when I first encountered it in 1991. And I’ve since had the pleasure of working with Paul on the third edition of Matter and Consciousness. I can only hope that the latest edition—still carrying that cover image of a human face falling away from the brain—is unnerving a new generation of college students this academic year.

Here is an excerpt from the book on eliminative materialism that struck Phil in his initial reading:

The arguments for eliminative materialism are diffuse and less than decisive, but they are stronger than is widely supposed. The distinguishing feature of this position is its denial that a smooth intertheoretic reduction is to be expected—even a species-specific reduction—of the framework of folk psychology to the framework of a matured neuroscience. The reason for this denial is the eliminative materialist’s conviction that folk psychology is a hopelessly primitive and deeply confused conception of our internal states and activities. But why this low opinion of our common-sense conceptions?

There are at least three reasons. First, the eliminative materialist will point to the widespread explanatory, predictive, and manipulative failures of folk psychology. So much of what is central and familiar to us remains a complete mystery from within folk psychology. We do not know what sleep is, or why we have to have it, despite spending a full third of our lives in that condition. (The answer, “For rest,” is mistaken. Even if people are allowed to rest continuously, their need for sleep is undiminished. Apparently, sleep serves some deeper functions, but we do not yet know what they are.) We do not understand how learning transforms each of us from a gaping infant into a cunning adult, or how differences in intelligence are grounded. We have almost no idea of how memory works, or how we manage to retrieve relevant bits of information instantly from the awesome mass we have stored. We do not know what mental illness is, nor how to cure it.

In sum, the most central things about us remain almost entirely mysterious from within folk psychology. And the defects noted cannot be blamed on inadequate time allowed for their correction, for folk psychology has enjoyed no significant changes or advances in well over 2,000 years, despite its manifest failures. We still use the same conceptual framework, in the marketplace and at the dinner table, as did the ancient Greeks. Truly successful theories may be expected to find successful reductions, but chronically unsuccessful theories merit no such expectation.