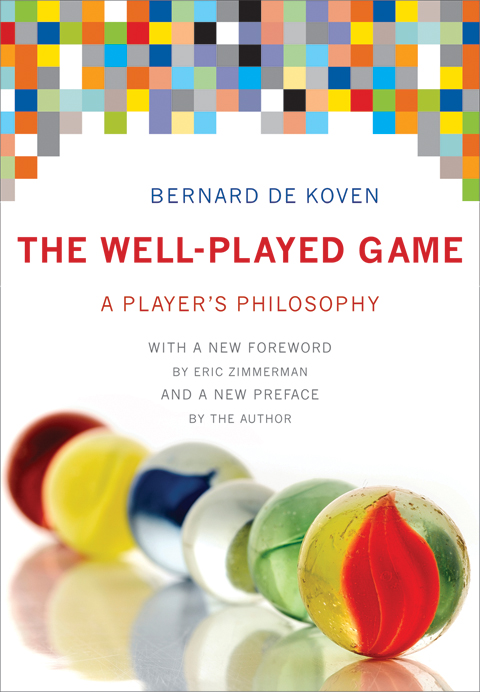 The Classic Reissue series highlights new editions of long-time MIT Press classics. See previous posts from the series on Learnability and Cognition and Matter and Consciousness.

When it was first published by Doubleday-Anchor in 1978, The Well-Played Game by Bernard De Koven was—in many ways—ahead of its time. As Bernie puts it, “despite its value to what was then becoming the ‘New Games Movement’ and other efforts to introduce recreational alternatives, the people who could most benefit from its message hadn’t as yet been born.” This past summer, the MIT Press published a new edition, with a Forward by Eric Zimmerman. We asked Bernie to reflect on how the idea came to him to write his book that has become a classic treatise on how humans play together. He shared these thoughts:

In 1968 I was hired by the School District of Philadelphia to create a curriculum in theater for children. The deeper I went, the clearer it became to me that children’s games were in fact a kind of theater, and that this theater of games had a surprisingly sophisticated aesthetic–what I later learned to call “the well-played game.”

The more I played with adults, and the more groups I played with, the more deeply I appreciated the power of the play community. I learned that, in as little as an hour, I could take a group of strangers, from virtually any background, and, playing children’s games, create community–a responsive, supportive, open, attentive, compassionate, deeply playful community. Which I later discovered was the same phenomenon that drove the success of the New Games movement.

The following excerpt from the book elaborates on this concept of the “play community”:

By empowering each other to create new conventions, by establishing guidelines, we assure each other of a common intention and mutual respect for the willingness to play, for the need for safety and trust. We need to recognize that these guidelines are fragile and fictitious, despite all the legislation we went through to be certain that they were mutually held. The only real assurance we have lies within the community of people with whom we are playing.

The need for this kind of community holds true whether we are players or spectators. As a spectator, I want to be able to scream for my team. If the spectator sitting next to me wants to scream for her team, and if she insists that I also scream for her team, the likelihood is that we will wind up screaming at each other. We have to spend more of our time resisting each other than enjoying the game. I want the game to be important. She wants the game to be important. But we both lose our opportunity to relish this importance when the game becomes more important to us than we are to each other.

When mother and child play together, regardless of what they are playing, they are establishing a play community in which both people operate under the convention that they take precedence over the game. When the child cries, the mother stops playing.

When children play together, in the street or in the back lot, they too establish a play community. When someone gets hurt, the game stops. When there’s a little kid around, you watch out for him, you play softer when you’re near him, you give the kid a break. At all times there is an acceptance of shared responsibility for the safety of those with whom you play.

Though this is a difficult thing to maintain, I can’t believe that this is any more difficult than maintaining any other convention. The point is that somehow, in the process of becoming an adult, in an attempt to establish familiarity, we tend to separate the game from the play community.