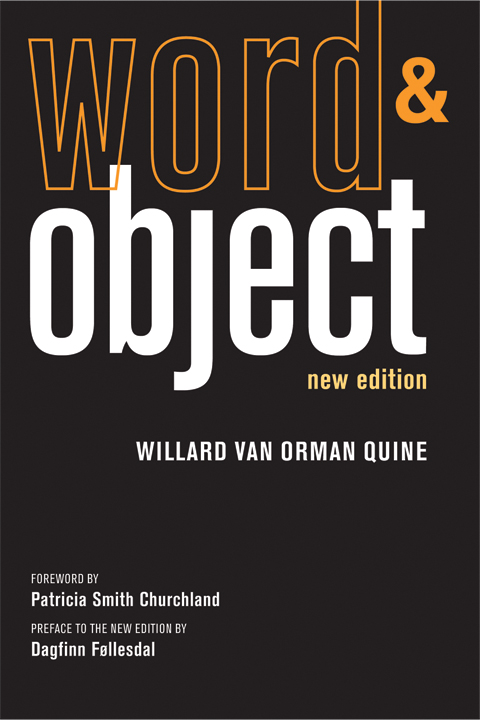 The Classic Reissue series highlights new editions of long-time MIT Press classics. See previous posts from the series on Learnability and Cognition, Matter and Consciousness, and The Well-Played Game.

At the beginning of this year, the MIT Press released a new edition of Willard Van Orman Quine’s highly influential work, Word and Object. The book, which signaled twentieth-century philosophy’s turn away from metaphysics, was first published in 1960. Senior Acquisitions Editor Philip Laughlin shared these insights on how the new edition came together with contributions from Patricia Smith Churchland and Dagfinn Føllesdal:

I first encountered the name W.V.O Quine while reading the preface of Thomas Kuhn’s The Structure of Scientific Revolutions in 1992.  The combination of the initials and the unusual last name were easy to remember and, shortly afterward, I began seeing his name everywhere, particularly in connection with an intellectual feud he was having with Jacques Derrida. Although I never read Quine, I was certainly aware of his publishing output (mostly by Harvard University Press) and his status as one of the preeminent American philosophers of the 20th century.

When I got to MIT Press, I knew that I wanted to publish a new edition of his classic, 1960 book Word and Object, but wasn’t sure how to proceed. Quine had died several years earlier and my attempts to secure a new foreword by a major contemporary philosopher were failing. By sheer luck, I came across an interview with Patricia Smith Churchland where she cited Word & Object as one of her favorite philosophy books. An email was quickly sent and, shortly afterwards, Pat had signed on to write a foreword for the new edition. Perhaps sensing a turn in fortune, Dagfinn Føllesdal also agreed to contribute a substantial new essay to the book, one that was more personal and had the approval of Professor Quine’s son, Doug. After several false starts, it all came together beautifully and easily, right down to the redesigned, retro cover. Although I always felt that republishing the book was a good idea, I knew it was the right decision when a recently signed author confessed to me that she was “thrilled” to be published by the same Press that produced Word and Object.

The following is an excerpt from Dagfinn Føllesdal’s moving Preface to the new edition which touches upon the never-realized plans for a second edition:

Word and Object is Quine’s most important book. It took him longer to write than any of his other books. He started in 1951 when Roman Jacobson “bespoke it for a series under his direction and got me Rockefeller money for secretarial help.” Nine years later it was published. Given Quine’s work habits, it is remarkable that the book took this long. He often worked a hundred hours a week with great intensity. When the manuscript was finally finished, in the summer of 1959, Quine said: “No more books.” However, he went on to write fourteen more.

However, Quine’s views did not only deepen and expand, they also changed in important ways. He considered writing a new introduction to Word and Object, spelling out how his views had changed. He decided instead to write a new edition of the book. In the summer of 1998, the Twentieth World Congress of Philosophy took place in Boston and Quine gave several of the invited lectures. I picked him up at his home on Beacon Hill and we walked to Copley Square, where the meetings were held, and back to his home. Every day Quine picked different routes through green areas, about two miles in each direction. On these walks he told me how he wanted to change the book. In the fall of that year he began working on the changes. We kept in touch during the fall and winter, but he reported that he made no progress on the writing. Finally, we decided that I should come over from Norway and stay with him. In March 1999 I did so.