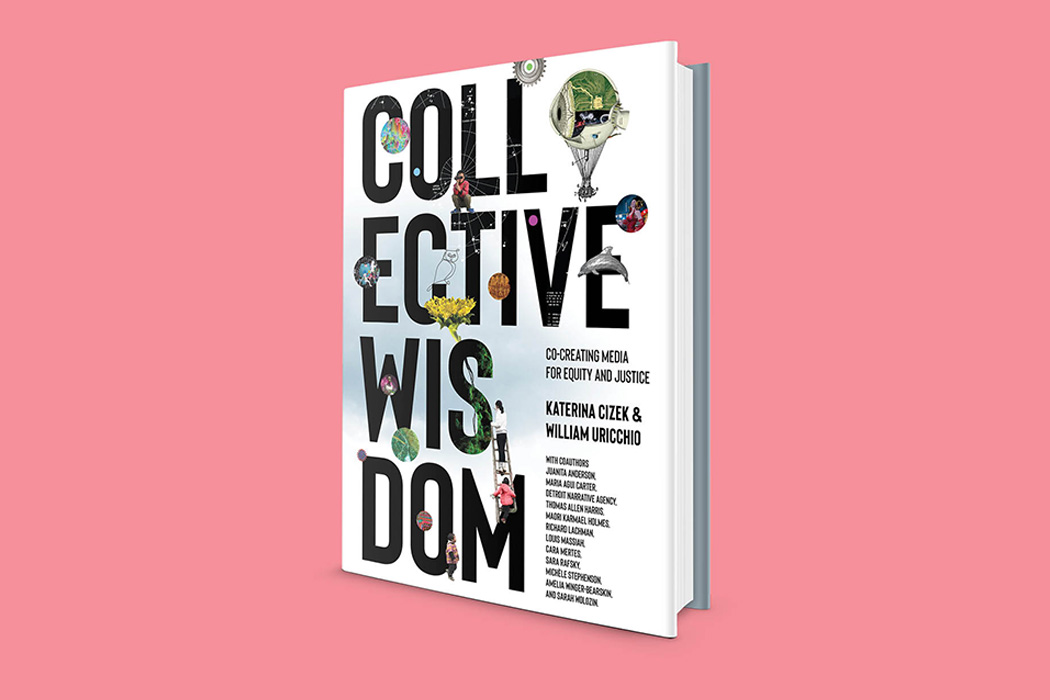 How we ended up with an NFT on our cover

The piece below is written by Katerina Cizek, coauthor of Collective Wisdom: Co-Creating Media for Equity and Justice

Our book on co-creation, Collective Wisdom, is one of the first in the world to feature a Non-Fungible Token (NFT) on its cover. While the NFT depicting a sunflower, called Van Gogh, The Mexican, is the cover’s centerpiece, it is only one of 12 design elements we wove together through a lengthy process to arrive at the final constellation. We knew that the book—about co-creating media for equity and justice, itself authored by two writers and 12 coauthors—needed a co-created cover that reflected the polyvocal nature of the book. Working with designers, curators, filmmakers, and artists, we set out to create a visual feast of emblematic cover images that would give justice to the image-rich book inside.

After early iterations with our designer, Helios Design Lab, we selected four drafts. I posted them to my personal Instagram feed for feedback. Immediately a front runner emerged, but not without controversy. It was a cover that featured the title “as large as the space allowed by breaking it up, eschewing some readability for maximum visual impact,” explained our designer, Alex Whittholz. ”This allowed us to place numerous images and illustrations around, behind and into the letterforms.”

The feedback was strong and fierce, and it spilled into many of my social channels. A linguist privately texted me warning us about our words’ morphological parse. “What is an ‘ECTIVE’?” she asked to make her point. Everyone, though, loved the images of kids from the Folk Memory Project, climbing a ladder up into the letters.

Another colleague, Violeta Ayala—an artist and filmmaker featured in the book—private-messaged me on Instagram to alert me that the cover felt tired and needed more expressions of the digital. I began looking for more images from corners of the metaverse we were inhabiting through our work at the co-creation studio, such as our time at the 2021 virtual edition of Venice Film Festival, where the curators had programmed live encounters with digital worlds, avatars, and experiences on VRChat, an online social platform.

Violeta also said we needed more nature on the cover. Her prompts for both the digital and natural reminded me of her own Instagram feed, where she was publishing daily her evocative and often stunning digital art.

At the time, Violeta—an Indigenous Bolivian Quechuan filmmaker—found herself trapped in a Covid lockdown in Australia. “​​It was the middle of the pandemic, everything was closed, and I had this idea of making a world with flowers, this worldling with flowers that move and dance,” she told me recently. Her goal was to 3D capture flowers and turn them into avatars with arms and legs made of sticks and stems. From the beginning, her intent was to make the collection as NFTs. Her feed was a lush digital garden, with animated 3D models, 2D stills, and AI generated poems of flowers. I sent Alex over to her feed. I didn’t at the time realize she was already minting them as NFTs.

Alex came back with another version of the cover, this time featuring Violeta’s flower Van Gogh, The Mexican in the center, emerging from a letterform rainforest, the stem wrapping itself around the giant S in “WISDOM,” and revealing an extraordinary bloom of bright yellow, metallic gold and the kind of joy only a sunflower can bring.

Violeta sighed, “you had to choose that one!” It was already minted, and we would need to figure out how to navigate a digital piece of NFT art within the logic of legacy media print releases. We’d need to separate out the NFT ownership of the digital file from the right to reproduce the image itself on our book cover.

“Some people confuse the IP with NFTs,” explained Violeta. “It is a way to prove ownership in a way. But in another way, it does not necessarily give you the right to publish it.”

After consulting Violeta’s lawyer, our lawyer, and MIT Press legal, we settled on both purchasing the NFT and on signing a separate image release directly with the artist.

While she is critical of the current hyper-capitalist culture and hype swirling around NFTs, Violeta is intent to harness the potential of blockchain technology to secure Indigenous sovereignty in art. “It’s this collective thinking of open sourcing, of building on top of what others create,” she said. “It’s scary, because then the hegemonic white culture will go and build over everything and take away. But when you have an NFT they cannot do that anymore, because you know who is the source. In a sense, it protects minorities, it protects us as artists, and it protects women because you’ll be able to digitally track everything. Then you can build on top of what others build, without having to destroy it.” Her aspirations for NFTs reflect a crucial element of co-creation: the importance of credit and sourcing in a world of stolen images.

Finally, with the NFT flower in place, our cover design felt complete. And the linguist, by the way, forgave us the morphological parse, and even hearted our reveal of the cover on Facebook.

Katerina Cizek, an Emmy and Peabody–winning documentarian, is the Artistic Director and Cofounder of the Co-Creation Studio at MIT Open Documentary Lab.