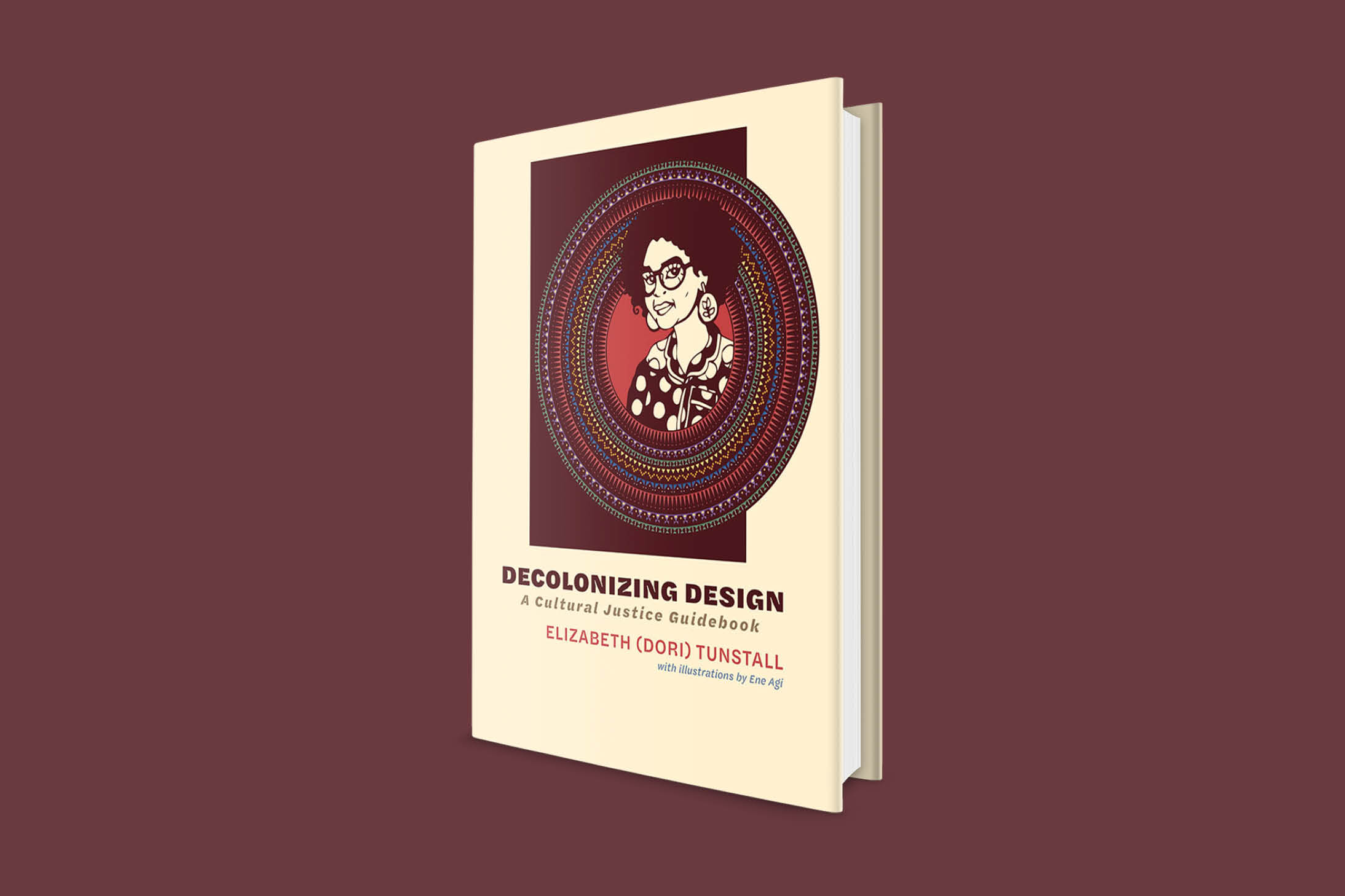 From the excesses of world expositions to myths of better living through technology, modernist design in its European-based guises has excluded and oppressed the very people whose lands and lives it reshaped. In Decolonizing Design, Elizabeth “Dori” Tunstall asks how modernist design has encompassed and advanced the genocidal project of colonization—and shows how design might address these harms by recentering its theory and practice in global Indigenous cultures and histories.

Tunstall is a designer by trade, a leader in the movement to decolonize design, and the first-ever Black individual in the world to hold a position such as Dean of the Faculty of Design at Ontario College of Art and Design University, Toronto. Her work focuses on decolonizing institutions in a holistic, radical, and all-encompassing way.

It was only fitting that Decolonizing Design perform that work as well, both in content and in the physical aspect of its design. “I thought it was important that the design of the book amplifies the talents of Indigenous and Black designers, makes tangible the concepts of the book, and follows a decolonial process,” Tunstall said. The MIT Press agreed that this mission was important to the publication and was supportive in Tunstall’s aim to build her own design team.

That team consisted of Sadie Red Wing, Lakota and Dakota graphic designer, who developed the cover; Ene Agi, Nigerian-Canadian illustrator, who created the illustrations; and with an interior designed by Silas Munro, a Black designer, and Brian Johnson, a member of the Monacan Nation, who are both cofounders of Polymode Studio.

“This design approach is thrilling, not only because it represents the ideal union of form and content, but because it transforms the physical object of the book into an act of decolonized design itself,” said Victoria Hindley, acquisitions editor for design and visual culture at the MIT Press.

For Red Wing, the marriage of form and content initially posed a challenge when developing a cover concept. “How can we develop a visual that is going to encompass the concept of decolonizing in design—and not exploit it, or mystify it, or miscommunicate it?” she asked.

Part of the puzzle, she said, was in bringing overarching concepts inherent to Indigenous cultures like land value and reciprocity into the design in a cohesive and comprehensive way. Regarding reciprocity, Red Wing initially explored a few ideas—”is it waves, is it a spiral?” she said—but ultimately she landed on the visual concept of a circular mandala that can be seen on both the front and back covers of Decolonizing Design.

She mentioned as well that she was cognizant of not focusing the cultural symbolism of the cover on one tribe or region. Instead, she endeavored to build a type of visual language that could be representative of many groups. Red Wing ultimately landed on a design centered on basic shape foundations like squares, triangles, and dots.

“There doesn’t need to be a specific definition for each of these symbols, although certain tribes might have them,” she said. “But rather the idea was for readers to see the symbols as a multitude of things, like sun rays, or an infinity symbol, or people standing in a line.”

The result is a cover that is not only beautiful and eye-catching, but also performs the work of decolonization—and demonstrates to others how they might imagine and remake the world. The interior, with illustrations by Agi and design by Munro and Johnson, extends that impact to every page.

“The team members are all close to my heart and share my personal values, so it only made sense to have them share in the project,” Tunstall said, adding that the profits from the sale of the book will be shared amongst the designers. “We all believe deeply in decolonizing design. We wanted the opportunity to show the world what that looks like.”

For those looking to do this kind of work in their own lives, Tunstall’s guidelines are clear: “Be in respectful relations with Indigenous peoples. You cannot decolonize your work unless you are in community dialogue with those who can hold you accountable for the approach and impact of your work.”