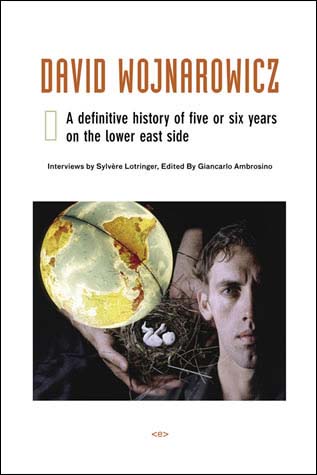 October is LGBT History Month. Last Friday, we posted an excerpt from Abdellah Taia’s An Arab Melancholia. Today’s post is an excerpt from an interview with Marion Scemama in Sylvère Lotringer and Giancarlo Ambrosino’s David Wojnarowicz: A Definitive History of Five or Six Years on the Lower East Side.

The camera for us was like some therapeutic tool. We were pretty bad, both of us, dealing with our emotions and feelings about each other. We had great moments of tension in our relationship, but on the other hand, as soon as we were connected through work, there were moments of exaltation and excitement that were extremely strong. Making the video helped us go beyond fears, tensions, and feelings of powerlessness. Every event, emotion, or feeling was a pretext to create a piece.

One day, it was my turn to express some doubts about our work. I had the feeling that somewhere I was going too far in exposing myself. Showing the videos to some people visiting, I realized that some scenes made them feel uncomfortable. What was all this about? What could be the real connection between a heterosexual woman who obviously had a great respect for homosexuality, and a homosexual man who had AIDS and obviously a lot of feelings and respect for this woman? Something about love emanate from these videos. But a strange love. Something we couldn’t even explain ourselves. A love beyond genders, beyond the restrictive and reductive definition of what it is to be a woman or a man in this “pre-invented” world, and what part is assigned to each person, whether homosexual or heterosexual, queer or female, breeder or sucker. We dreamt of breaking these frontiers. We just wanted to be human beings, detached from genders, or being all the genders at once.