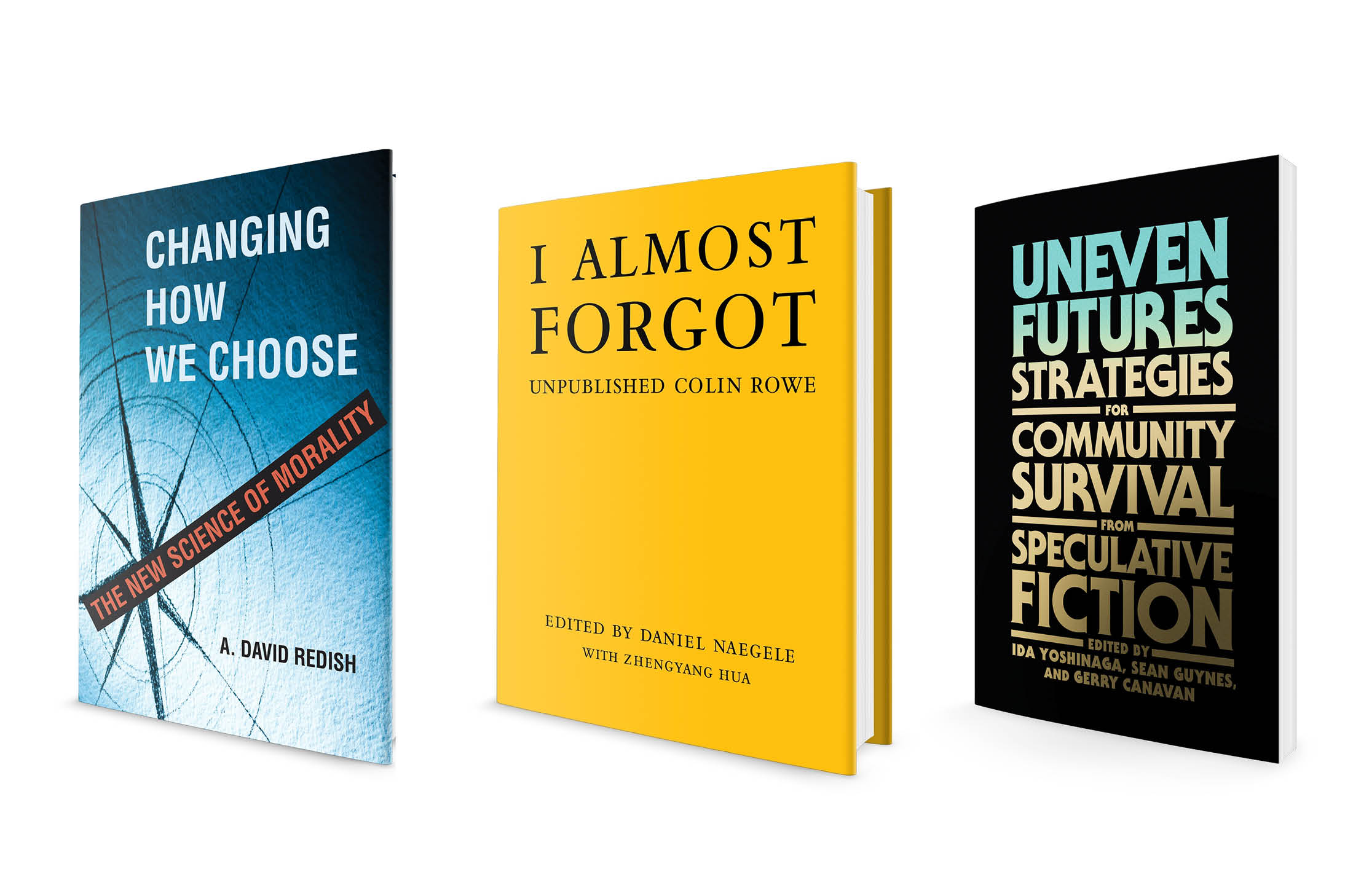 Explore some of our most anticipated new releases for December

New books this month: a study of the “new science of morality”; the unpublished writings of architect Colin Rowe; and essays on speculative and science fiction. Explore these books and a selection of our other new and soon-to-be-published titles below.

In Some Reasons for Traveling to Italy, architect Peter Wilson offers a Grand Tour of Grand Tours, providing an idiosyncratic guidebook to architectural (and other) wonders of Italy, illustrated by his own witty watercolors and sketches. Wilson chronicles the reasons that people throughout history have traveled to Italy—ranging from “To Be the Subject of an Equestrian Painting by Uccello in Florence Cathedral” to “To Rebuild Herculaneum in Malibu” (the desire of oil tycoon J. Paul Getty in the 1970s)—while giving readers a deeper understanding of Italy’s architectural habitat and cultural mythology.

Age of Auto Electric: Environment, Energy, and the Quest for the Sustainable Car by Matthew N. Eisler

Electric cars were once as numerous as internal combustion engine cars before all but vanishing from American roads around World War I. Now, we are in the midst of an electric vehicle revival, and the goal for a sustainable car seems to be within reach. In Age of Auto Electric, Matthew N. Eisler shows that the halting development of the electric car in the intervening decades was a consequence of tensions between environmental, energy, and economic policy imperatives that informed a protracted reappraisal of the automobile system. These factors drove the electric vehicle revival, argues Eisler, hastening automaking’s transformation into a science-based industry in the process.

“Far more than a history of battery development, it offers a roadside view of an energy transition-in-progress and the sociotechnical complexities involved in transforming entrenched infrastructures.” —Suzanne Moon, University of Oklahoma

Changing How We Choose: The New Science of Morality by A. David Redish

In Changing How We Choose, David Redish makes a bold claim: Science has “cracked” the problem of morality. Redish argues that moral questions have a scientific basis and that morality is best viewed as a technology—a set of social and institutional forces that create communities and drive cooperation. This means that some moral structures really are better than others and that the moral technologies we use have real consequences on whether we make our societies better or worse places for the people living within them. Drawing on this new scientific definition of morality and real-world applications, Changing How We Choose is an engaging read with major implications for how we see each other, how we build our communities, and how we live our lives.

“A fascinating read for everyone interested in the foundations of human morality or in the improvement of communities.” —Ernst Fehr, University of Zurich; editor of Neuroeconomics

You might also like The Structure of Moral Revolutions: Studies of Changes in the Morality of Abortion, Death, and the Bioethics Revolution by Robert Baker

The majority of the world’s inhabitants live in cities, but even with the vast wealth and resources these cities generate, their most vulnerable populations live without adequate or affordable housing, safe water, healthy food, and other essentials. And yet, cities also often harbor the solutions to the inequalities they create, as this book makes clear. With examples drawn from cities worldwide, Co-Cities outlines practices, laws, and policies that are presently fostering innovation in the provision of urban services, spurring collaborative economies as a driver of local sustainable development, and promoting inclusive and equitable regeneration of blighted urban areas.

“In light of today’s technological advances, this book compellingly advances the idea of the city as a commons.” —Carlo Ratti, MIT

You might also like Just Urban Design: The Struggle for a Public City edited by Kian Goh, Anastasia Loukaitou-Sideris and Vinit Mukhija

Colin Rowe (1920–1999) was one of the great architectural historians of the twentieth century, publishing the influential works The Mathematics of the Ideal Villa and Other Essays (1976) and Collage City (1978). While his written work was rigorous and authoritative, his lectures and letters were more casual, “carefully careless,” both witty and erudite. I Almost Forgot gathers twenty-three such writings—letters, essays, lectures, a postcard, and a eulogy. Both edifying and entertaining, sometimes tongue-in-cheek, occasionally scathing, they fill in personal details and clarify key concepts in Rowe’s work.

In Mental Patient, philosopher Abigail Gosselin uses her personal experiences with psychosis and the process of recovery to explore often overlooked psychiatric ethics. For many people who struggle with psychosis, she argues, psychosis impairs agency and autonomy. She shows how clinicians can help psychiatric patients regain agency and autonomy through a positive therapeutic relationship characterized by mutual trust. Patients, she says, need to take an active role in regaining their agency and autonomy—specifically, by giving testimony, constructing a narrative of their experience to instill meaning, making choices about treatment, and deciding to show up and participate in life activities.

“A clear-eyed and courageous account of mental illness.” —Havi Carel, University of Bristol

Remaking the American Dream: The Informal and Formal Transformation of Single-Family Housing Cities by Vinit Mukhija

In defiance of long-held norms and standards, single-family housing is slowly but significantly transforming through incremental additions of second and third units. Drawing on empirical evidence of informal and formal changes, Remaking the American Dream documents homeowners’ quiet unpermitted modifications, conversions, and workarounds, as well as gradual institutional alterations to once-rigid local land-use regulations. Mukhija’s primary case study is Los Angeles and the role played by the State of California—findings he contrasts with the experience of other cities including Santa Cruz, Seattle, Portland, Minneapolis, and Vancouver. In each instance, he shows how, and asks why, homeowners are adapting their homes and governments are changing the rules that regulate single-family housing to allow for second units.

“Musicking” encapsulates both the making of and perception of music, so it includes both active and passive forms of musical engagement. But at its core, it is a relationship between actions and sounds, between human bodies and musical instruments. Viewing musicking through this lens and drawing on music cognition and music technology, Sound Actions proposes a model for understanding differences between traditional acoustic “sound makers” and new electro-acoustic “music makers.”

“A thorough and systematic treatment of new musical instrument research in the digital age, Sound Actions is an interdisciplinary tour de force that will be a key encyclopedic reference for all musickers interested in the empirical study of embodied musical experience.” —Atau Tanaka, Series Editor, Goldsmiths Press / Sonics Series

The explosion in speculative/science fiction (SF) across different media from the late twentieth century to the present has compelled those in the field of SF studies to rethink the community’s identity, orientation, and stakes. In this edited collection, more than forty writers, critics, game designers, scholars, and activists explore core SF texts, with an eye toward a future in which corporations dominate both the means of production and the means of distribution and governments rely on powerful surveillance and carceral technologies. Unlike other books of speculative/science fiction criticism, Uneven Futures uses a think piece format to make its critical insights engaging to a wide audience. The essays inspire visions of better possible futures—drawing on feminist, queer, and global speculative engagements with Indigenous, Latinx, and Afro- and African futurisms—while imparting important lessons for political organizing in the present.