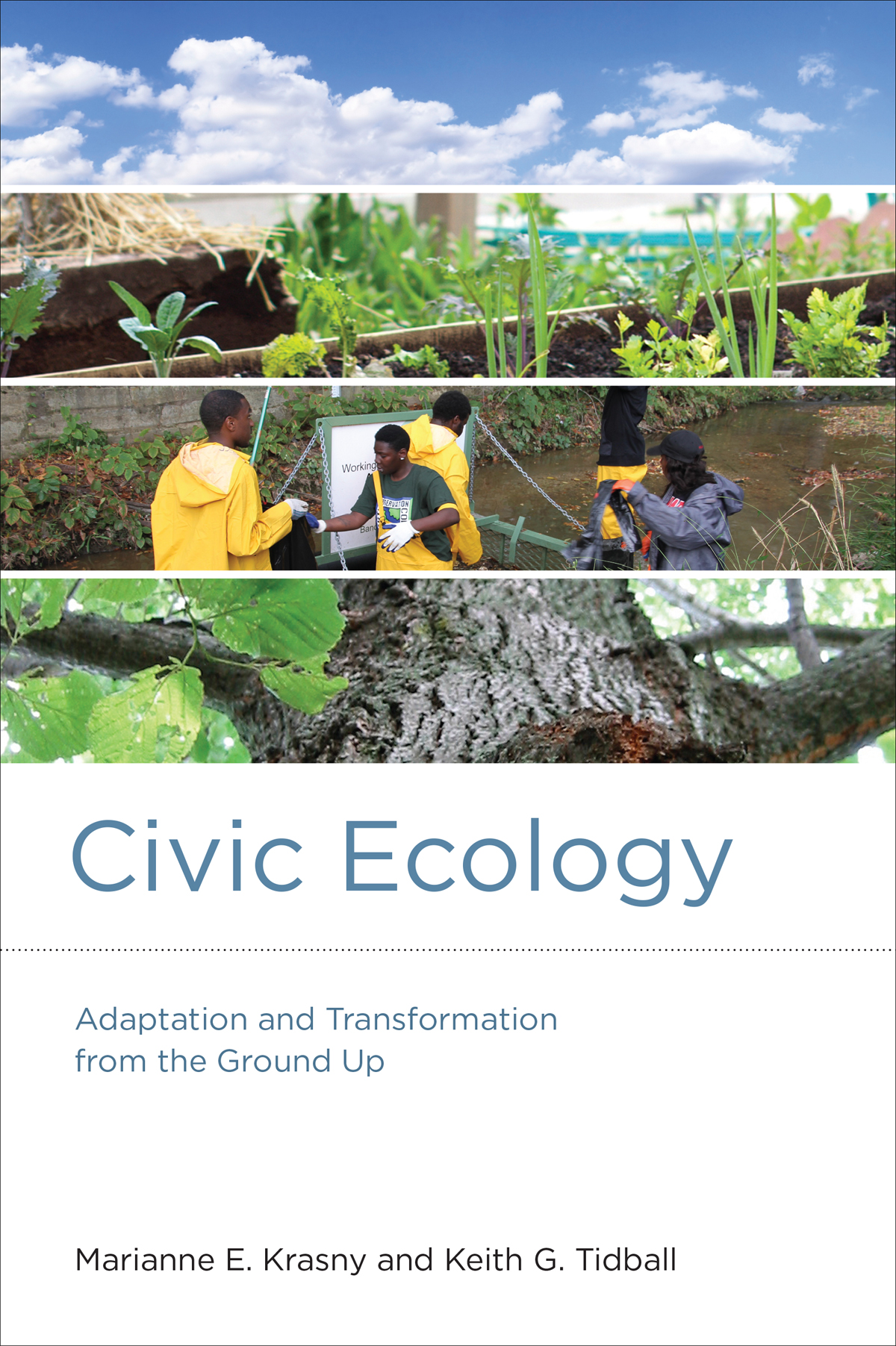 In Civic Ecology: Adaptation and Transformation from the Ground Up, Marianne Krasny and Keith Tidball offer stories of emerging grassroots environmental stewardship, chronicling how local environmental stewards have undertaken such tasks as beautifying blocks in the Bronx, clearing trash from the Iranian countryside, and working with traumatized veterans to conserve nature and recreate community. They make the case for how humans’ innate love of nature and attachment to place compels them to restore places that are threatened, destroyed, or lost. In honor of Earth Day, Marianne Krasny reflects on recent civic engagement projects in China, South Africa, and beyond.

One month before Earth Day, I found myself cleaning up trash in the Yuan Dynasty Wall Relics Park in Beijing. We weren’t picking up litter in front of the imposing statue of China’s Mongolian emperor Kublai Khan and his entourage of imperial concubines, soldiers, and elephants. And we weren’t next to the mosaic murals or lovely ponds and flowering cherries. Rather we were in a back, neglected corner of the park. Although there were no grandparents pushing baby strollers or old men flying kites in our neglected corner, it appeared to have been visited by humans nonetheless. But perhaps not for reasons the park managers intended.

My cleanup event was one of many civic ecology practices I have participated in or visited as I give talks in cities in the US, Europe, and Asia. 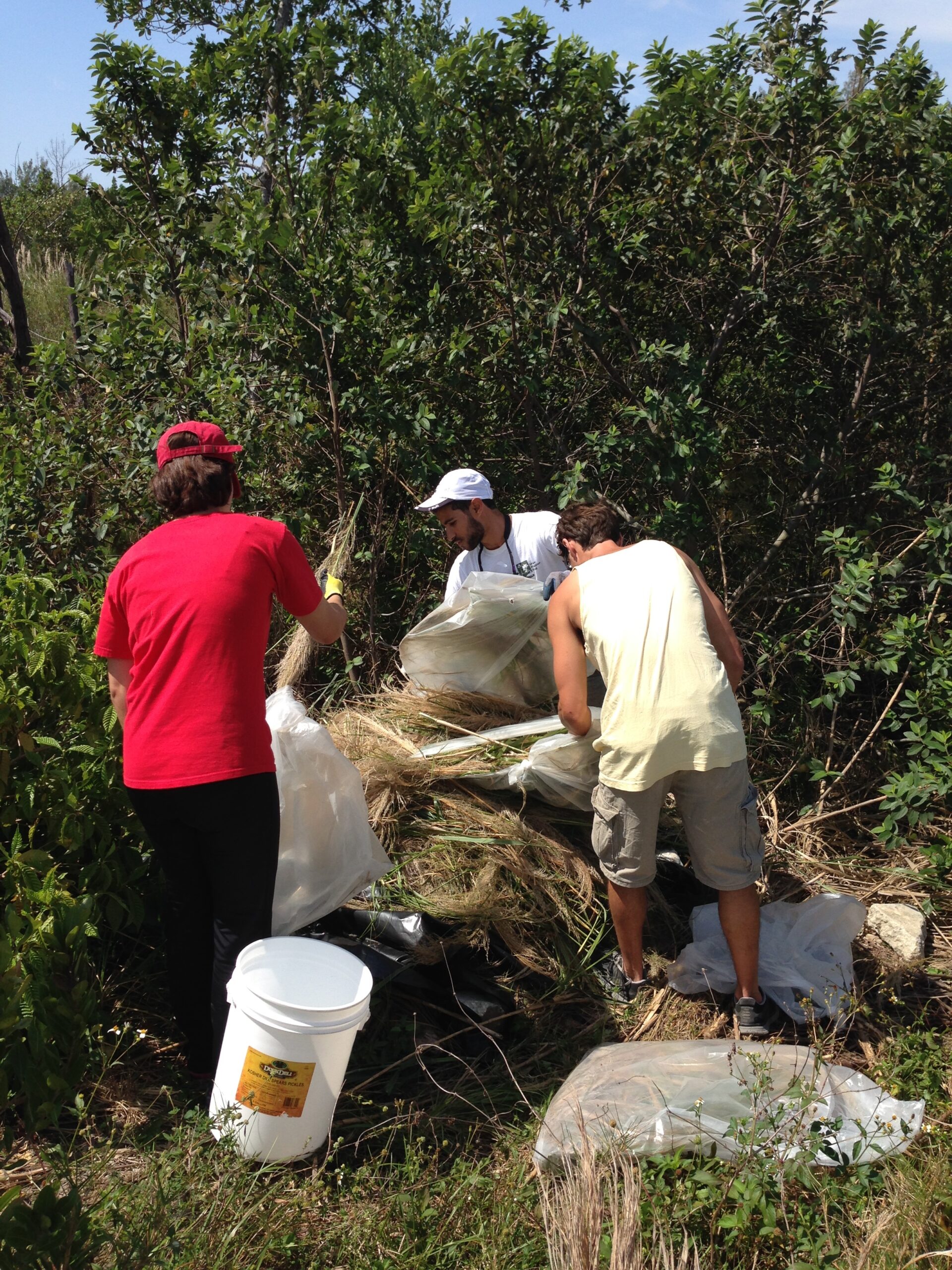 In Miami’s Oleta River State Park, I helped remove invasive Burma reed with volunteers from the Urban Paradise Guild. I then stopped by Little Haiti Community Garden, where I talked to a gardener cultivating herbs to be concocted into Haitian traditional bitters, which he planned to sell to neighbors passing by. In Stockholm’s Tensta allotment garden, I was able to communicate with a gardener just enough to understand he was from Iraq, but not enough to understand why there was a dead fish hanging in a nearby tree. And after giving a talk at the Harvard Arnold Arboretum, my hostess hauled me out to the former Boston Insane Hospital, which today houses volunteers like me helping the Boston Nature Center trim back dead stalks in a butterfly garden, and hack away at invasive shrubs and vines engulfing a trail.

Several years ago, I visited the Edith Stephens Wetland Park in South Africa with Civic Ecology coauthor Keith Tidball. There, amidst miles upon miles of substandard housing in Cape Flats township, local residents had planted a community garden and were helping to preserve the endangered Cape Quillwort, a fern-like “living fossil” that has survived for millions of years. The park also had served as a neutral ground for local gangs to negotiate an end to their hostilities. The peace-making activities in Edith Stephens Wetland Park brought to mind Keith’s work in Detroit and New Orleans, where residents were using tree planting and other civic ecology practices to reclaim places “broken” by years of neglect, conflict, and even hurricanes. 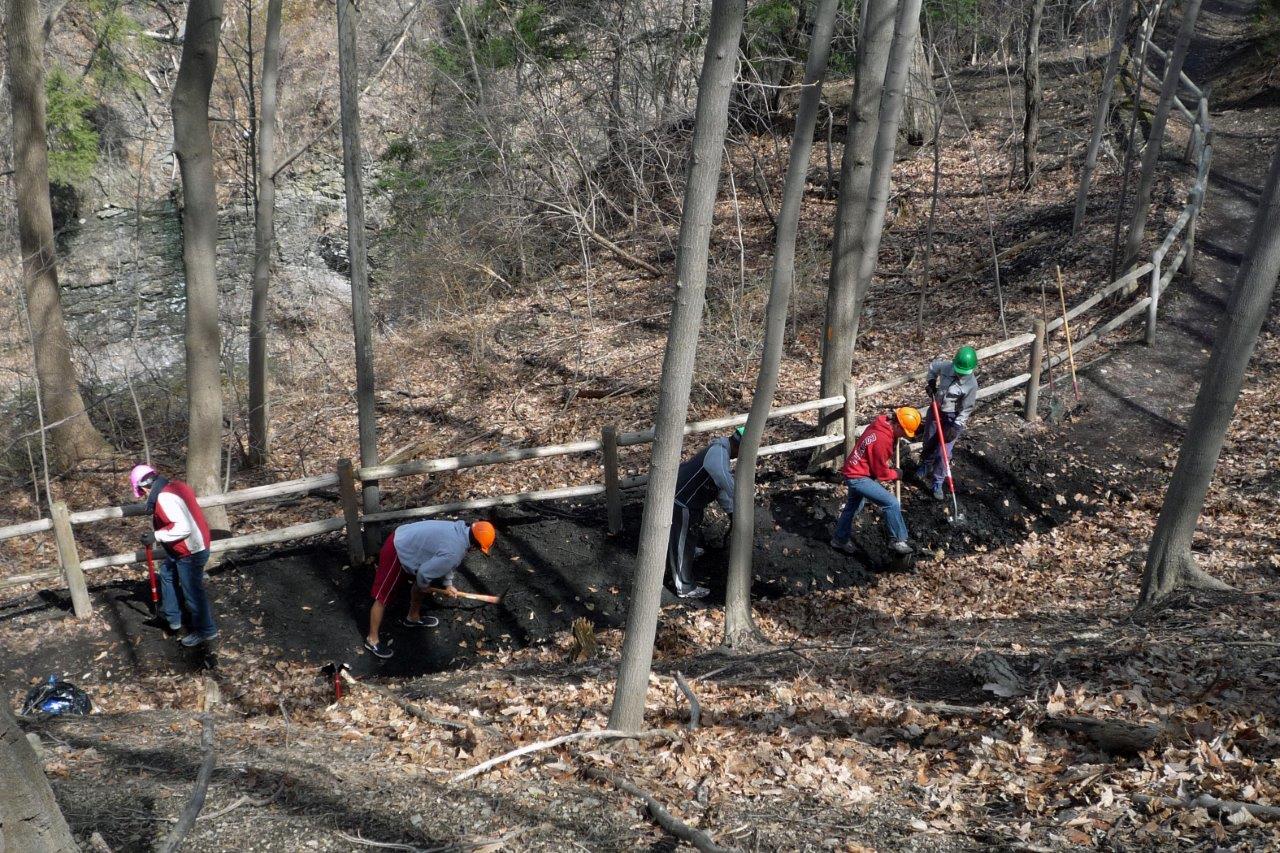 What struck me about our cleanup in Beijing’s public park was how similar it was to cleanups I have helped out with near my home in Ithaca, NY. After a series of student deaths in the campus gorges, I founded the Cornell student organization Friends of the Gorge; I wanted to give students a voice in formulating campus natural area policy that balanced safety with the mental health benefits of spending time in and stewarding nature. Our stewardship activities over the years have included trail repair, tree planting, and, yes, litter cleanups. I also help a local group Friends of Ithaca City Cemetery prune trees, repair broken tombstones, and clean up trash in a wooded graveyard on a hill above the city.

Whether volunteering in a Chinese city of over 21 million, or in a small college town in upstate New York, I have noted features that cut across civic ecology practices. First, plastic trash is embedded in the fabric of our soils—we can remove the surface layer, but when we try to extract a greying plastic bag from the ground, it becomes obvious that parts of it are here to stay. Second, people use unvisited corners of parks and natural areas to link to—and to remember—life. In Beijing, my eye was drawn toward a small pile of pink trash. When I walked over to pick it up, I knew not to remove it. The pink trash turned out to be plastic flowers marking a mound—undoubtedly a memorial for someone who had passed away. And one spring morning in Ithaca’s gorges, I encountered a man releasing a mouse under a log—he had trapped the mouse in his home and couldn’t bear the idea of killing it. Although to me this was a rather silly manifestation of biophilia—or love of other forms of life—such love motivates stewards to engage in civic ecology practices. For other civic ecology stewards, topophilia, or love of the place where they live and work, is a more salient motivator. 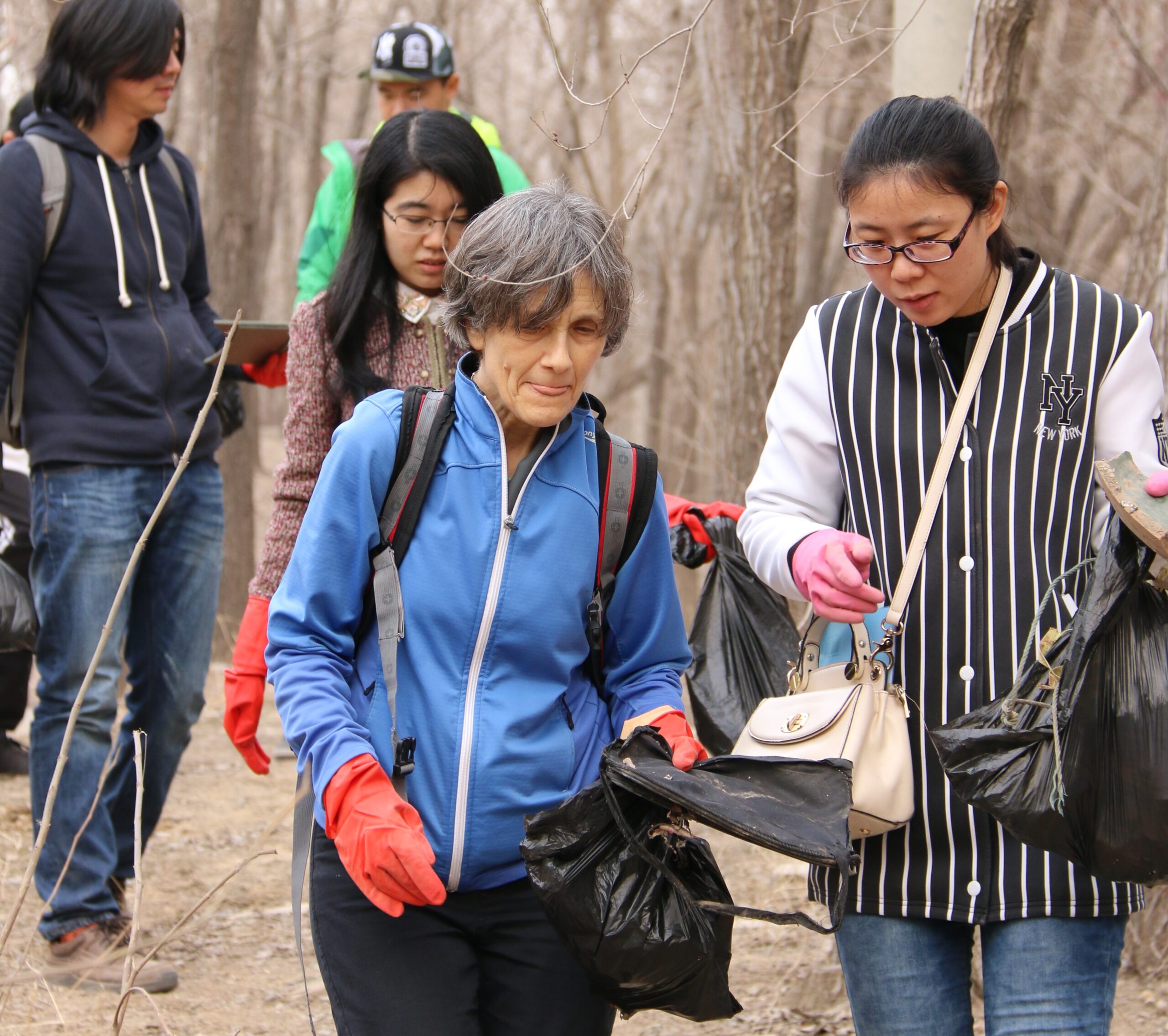 Something else I notice repeated across civic ecology practices is the reaction of passersby. They are appreciative, curious, and in some cases inspired. A woman walked by Little Haiti Community Garden in Miami; a smile illuminated her face as she told us the lush plantings reminded her of her native Haiti. A young girl walking by our group removing trash in Beijing’s Yuan Dynasty Park stopped to ask us what we were doing. She continued on her trajectory, only to turn around and pick up a piece of trash. The reaction of a park employee who spotted us at work was telling. First he interrogated the Beijing high school students leading our cleanup outing (fortunately, they had received permission from the park manager). He expressed concern for the safety of our one male participant, fearing he might be solicited by gay men who used the park as a hangout. Besides his comments reflecting the precarious state of gay rights in China (something I hadn’t encountered elsewhere), the park employee’s movements suggested he was embarrassed by us discovering a treasure trove of trash in his park. When we walked toward a heavy plastic bag full of trash dumped near the park wall, he graciously said not to worry, he would take care of it. Whether our little cleanup actually influenced the park employee’s actions we didn’t stay around long enough to find out. But a group calling itself The Ugly Indian that cleans up small public places along city streets in India, purposefully plans their “spotfixes” near municipal office buildings. City officials, who previously ignored pleas to rid open space of garbage, are now joining in the spotfixes. And they are asking The Ugly Indian to take the lead in sprucing up other public spaces—like painting and planting flowers underneath highway flyovers (overpasses). 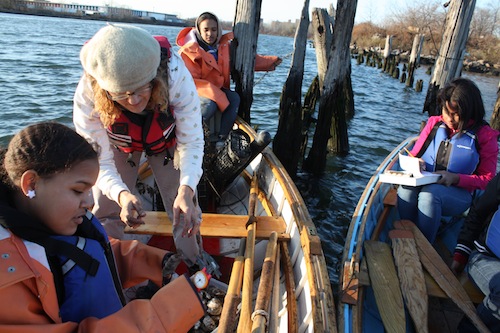 But perhaps most noteworthy is the meaning these practices have for the participants. Community gardeners in Houston are proud that the green oases they have created are a place for children to learn about raising vegetables and about birds and squirrels. Volunteers with Iran’s Nature Cleaners share tea or soup in a Tehran park after removing trash. And oyster gardeners in New York City talk about their efforts to restore oysters as bringing back the “liver” of the estuary (oysters are filter-feeders and were once abundant in the New York harbor). Civic ecology stewards create opportunities for learning, for forging social connections, and for drawing on “social-ecological memories” to reclaim vacant lots and polluted waters, and communities.

Whether a litter cleanup in Beijing or Ithaca NY, an invasive species removal in Miami or Boston, an allotment garden in Stockholm or a community garden in Cape Flats, any one civic ecology practice is small. That is, small in the space it covers and small in its impact on our Earth. Yet we see these small groups that steward small spaces forming coalitions with similar efforts, as well as joining in larger networks of environmental, educational, and community development non-profits, government agencies, and businesses. Perhaps it is through a “revolt,” where small stewardship “innovations” influence larger more established institutions, that civic ecology practices will have an impact beyond a corner of Beijing’s Yuan Dynasty Wall Relics Park, or the Ithaca City Cemetery.

Keith Tidball and I have captured the work of these community environmental stewards—and the larger importance of their efforts for communities and the environment—in our book Civic Ecology: Adaptation and Transformation from the Ground Up. We also have shared these stories and the research behind them in our edX MOOC Reclaiming Broken Places: Introduction to Civic Ecology and in an online course for high school students in China. Ten civic ecology principles—explaining where and why the practices occur, their common elements, and how they play a role in larger social-ecological systems and governance networks—frame the book and online courses.

I thank Cornell University PhD candidate Yue Li and her civic ecology online course students from Remnin University Affiliated High School who organized the Beijing park cleanup. I also thank the hundreds of other civic ecology stewards who have shared and welcomed me into their inspirational practices.