In our book Designed for Hi-Fi Living: The Vinyl LP in Midcentury America, we show how record albums of the 1950s and 1960s provided an optimistic vision of the United States and helped form a notion of the nation’s future in the aftermath of World War II. As the United States prepares for the hotly contested 2018 midterm elections, we reflect on our growing collection of election- and patriotism-themed records from midcentury. They capture an idealized history of the county’s political foundations in sound, with music and voices expressing civic pride and civil discourse, as well as political conflict. 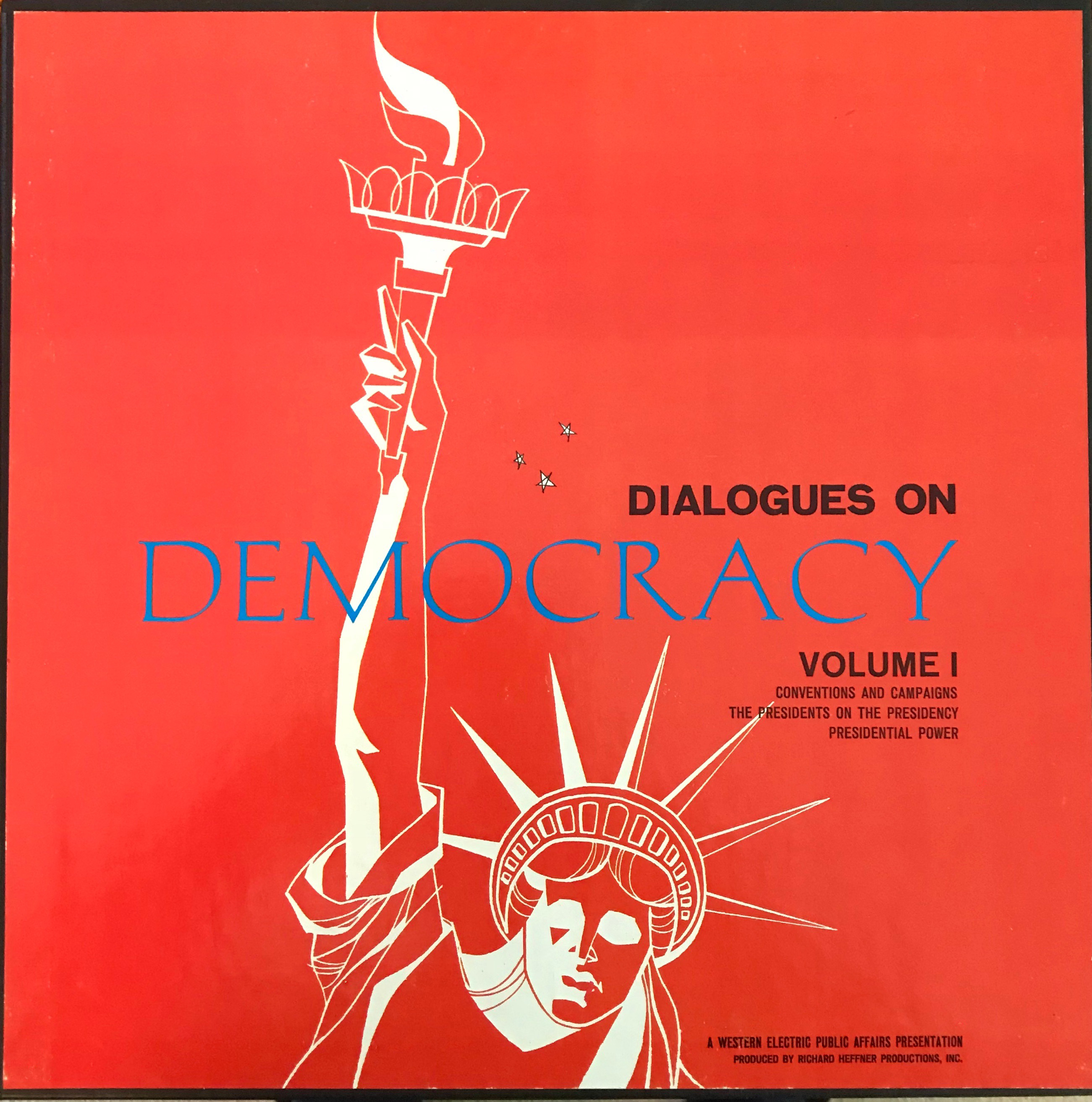 Dialogues on Democracy “consists of three records designed to entertain, inform and promote discussion and further study.” The cover of vibrating red and turquoise completed with an odd-angled and slightly hysterical white Lady Liberty creates a vivid, if less traditional patriotic image. Released by Western Electric, a unit of the pre–break up Bell Telephone System, the elaborate box set was meant “to stimulate and encourage individual employee expression and action in the political life of the community.” Dialogues on Democracy presents a range of political content, including early recordings such as Grover Cleveland’s 1892 campaign speech, campaign songs supporting William McKinley in 1896, Franklin Delano Roosevelt’s first inaugural speech from 1933, a 1962 radio address from John F. Kennedy, and an in-depth discussion of presidential power. A booklet that came with the album provides the complete text of the recordings. Upon listening to Dialogues on Democracy today, it’s interesting to compare these snippets of presidential speech to today’s ubiquitous Twitter feeds. The encouragement of a workplace- and company-based political community is striking. 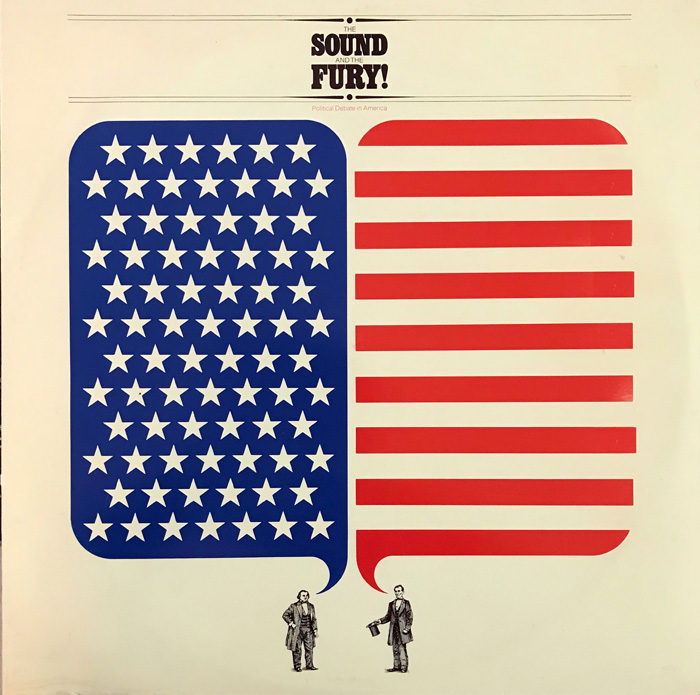 From an eyewitness, in-the-crowd, perspective, The Sound and the Fury! Political Debate in America plunges the listener into the issue of slavery in the dramatic recreation of the landmark debates between abolitionist Abraham Lincoln and the racist states’ rights candidate Stephen A. Douglas. The intersections of technology and presidential campaigns then become the focus, centering on the power and far-reaching communications of television in the Nixon and Kennedy debates. This Time Education Program LP cover offers a giant blue speech bubble filled with white stars, emerging from a tiny figure of Douglas mirrored by a red and white striped bubble from Lincoln. This illustration of both political parties, deeply divided yet contributing to the overall project of maintaining the union represented by the image of the American flag, supports a process of contestation, dialog, and debate. 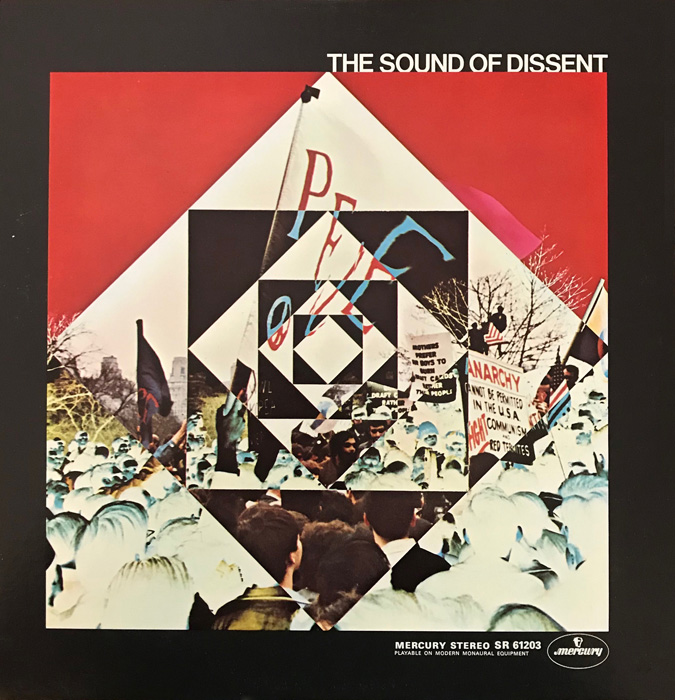 An intriguing sound collage of news reports, field recordings, and psychedelic rock, The Sound of Dissent provides a compelling artifact of the 1960s antiwar movement. The music was written by Dan Armstrong, a well-known guitar player and designer, whose guitars and guitar accessories have been used by a long list of music industry luminaries, such as Keith Richards, Dave Grohl, and Nile Rogers. Voices on the record include politicians such as Robert F. Kennedy and Eugene McCarthy, civil rights activist Ralph Abernathy, and child care expert and antiwar protester Dr. Benjamin Spock, as well as numerous “regular” folks who turned up to protest the Vietnam War at antiwar rallies, peace marches, and college campuses. The recording communicates a value in dissent:—“This is the sound of our time”—and also an ethics of representation, as the album’s creator and producer Jack McMahon writes: “I know how important it is that the remarks, feelings, and attitudes of these people not be misrepresented either in the editing required in the arrangement of the material or in the music which accompanies it.” In presenting different voices from different sides of the aisle, the record suggests a process of disagreement and then resolution, even among those who vehemently disagreed with each other. Looking more like a rock album cover with classic colors of conflict—red, black, and white—The Sound of Dissent’s inset shifting squares and diamonds feature scenes of protests in both positive and negative exposures. 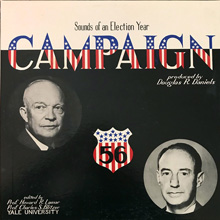 “This is a nonpartisan recording” proclaims the liner notes of Sounds of an Election Year Campaign 56. The album was “made from actual speeches and events during the 1956 Election year” that resulted in Dwight D. Eisenhower’s landslide reelection over Democratic candidate Adlai Stevenson. Compiled by a group of Yale University political science professors and produced by Yale alumni Douglas Daniels, it provides a record of a very different era in political campaigns. The liner notes point out that the record was specially produced by the RCA Victor Custom Record Department on “Gruv-Guard Vinylite.”

The Making of the President 1960 is a double album sound track “from the widely acclaimed television show,” which was based on the Pulitzer Prize winning book by Theodore H. White. The red, white, and blue LP cover features a black and white photo of John F. Kennedy mid-speech. In the album’s liner notes, White reports concern about making the television documentary: “Unless goodwill and conscience, as well as artistry, dominate an entire production, what the viewer actually sees may be actually untrue.” 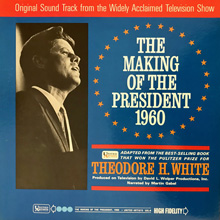 The film’s production was finished shortly after Kennedy was shot in November 1963, and White reveals how, after debating, the producers decided to release the film as it was. His liner notes conclude: “John Fitzgerald Kennedy liked American history the way it was; the men who were his rivals in 1960 enjoyed politics as much as he; and since this is the way Americans do seek power in our time, it seemed best to us, finally, to leave the film as it was finished when John F. Kennedy was still a man of live controversy.” The record provides a vivid account of the 1960 campaign that propelled Kennedy to the White House, stirring even without the infamous television images. The tale is told in the style of a mystery thriller, evoking issues of elitism, religion, and “tides of prejudice,” and featuring atmospheric music and the voices of Kennedy, Nixon, and familiar narrator, Martin Gabel. 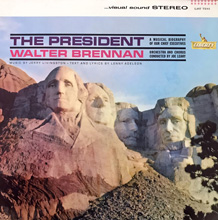 The President: A Musical Biography of our Chief Executives offers a color photograph of Mount Rushmore and a medley of music and narration that dramatizes the US presidents from Washington to Eisenhower. The liner notes reveal that narrator Walter Brennan, a three-time Academy Award-winning actor, is “a descendent of one of the original families to settle in New England” (with his strong New England accent to prove it). This authentic connection to the fabled Pilgrims offers a “rich heritage that lends the sincerity and dynamic credence to this truly unusual performance.” Lyrics are by Lenny Adelson, who wrote lyrics for many film soundtracks, including Master of the World and Hell’s Belles, both of which feature music by exotica pioneer Les Baxter. 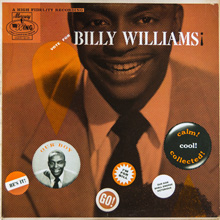 Vote for Billy Williams does not feature songs about voting; only the LP title and its cover’s campaign buttons proclaiming “I’m for Bill!” and “He’s It!” link to election themes. Williams worked with Bing Crosby and Frank Sinatra, and had a big hit with his cover of Fats Waller’s “I’m Going to Sit Right Down and Write Myself a Letter” in 1957. He led the Charioteers, a successful gospel group during the 1940s and 1950s, before forming the Billy Williams Quartet.

Songs of Heritage and Patriotism 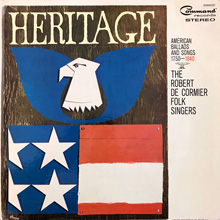 “Robert De Cormier’s exciting explorations of folk songs from all parts of the world have inevitably led him back home–back to our own musical heritage” begin the liner notes of Heritage: American Ballads and Songs 1750–1840. De Cormier, who worked with Harry Belafonte and Peter, Paul, and Mary, served as music director for the New York Choral Society and collected songs from the colonial period. This album “follows the growth of the United States through its songs,” and includes classics like “Yankee Doodle Dandy,” alongside obscurities such as “Mad Anthony Wayne” and “Pretty Saro.” Charles E. Murphy served as art director for Command Records, and for the cover created primitive renderings of the stars and stripes topped with a graphic eagle against a rustic wood panel crowned by the word “Heritage” in a colonial font. 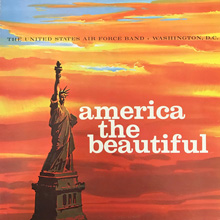 America the Beautiful from the United States Air Force Band and the Singing Sergeants presents “The Music of a Nation.” As Sergeant Harry H. Gleeson’s liner notes attest: “America the Beautiful, however, is far more than the land alone. America the Beautiful is people—educators, laborers, scientists, truck drivers, and so many more, all combining forces to mutually create and sustain the beauty of the land and people.” Along with the title song, selections include “Give Me Your Tired, Your Poor,” “The Stars and Stripes Forever,” and “The Battle Hymn of the Republic.” The celebratory liner notes conclude: “it is in America that band music has reached its zenith—has become the music of the people.” Hyperbolic, shy on history, and teetering toward patriotic populism? The glorious orange, vermillion, and blue of a toxic sunset provide backdrop to the Statue of Liberty, also coated in a gory red. 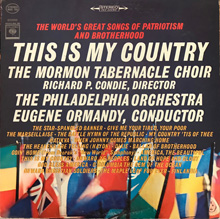 This is My Country, from the Mormon Tabernacle Choir and the Philadelphia Orchestra, features “The World’s Greatest Songs of Patriotism and Brotherhood.” The deluxe, two-record set opens with a rousing version of “The Star-Spangled Banner,” that includes a rarely heard second verse. Songs are sung by “one of the great cultural institutions of America,” the notes proclaim without, perhaps as a sign of American religious tolerance, any commentary on the roots, beliefs, and antigovernment aspects of Mormon history. Reflecting the flags of many nations theme of the color cover photo, the album ventures overseas on “The Marseillaise” and “Finlandia,” but mostly sticks with perennial patriotic songs like “When Johnny Comes Marching Home” and “America the Beautiful.”

Janet Borgerson is an independent scholar. Jonathan Schroeder is William A. Kern Professor of Communications at Rochester Institute of Technology. Borgerson and Schroeder are coauthors of Designed for Hi-Fi Living: The Vinyl LP in Midcentury America and From Chinese Brand Culture to Global Brands: Insights from Aesthetics, Fashion and History.