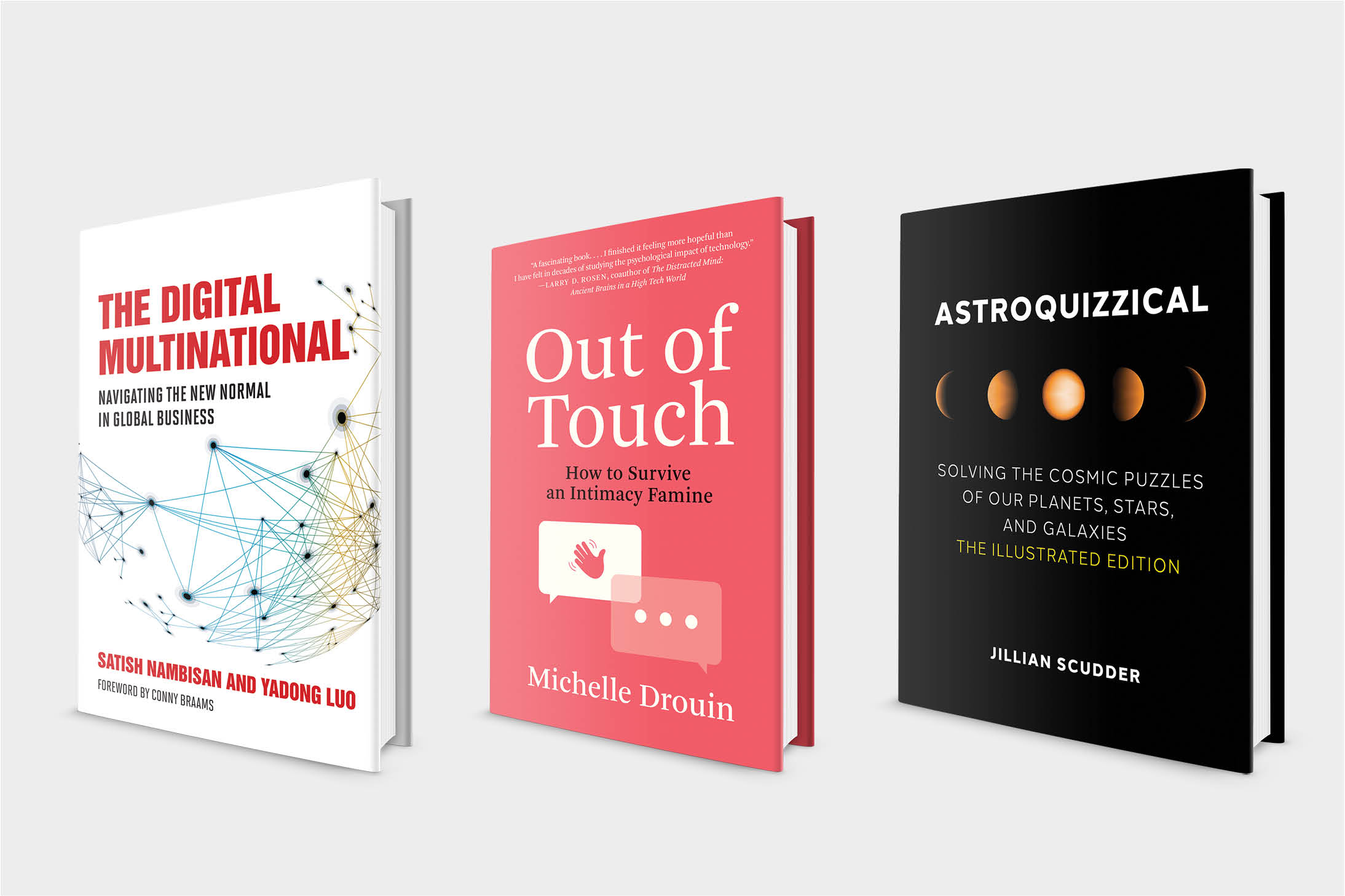 Explore a selection of our most anticipated new releases for February

This month: a lavishly illustrated volume on “cosmic puzzles”; a guide to digital technology for multinational corporations; an exploration of love, belongingness, and fulfillment from a behavioral scientist; and more. Explore these and a selection of our other new and soon-to-be-published titles below.

Astroquizzical: Solving the Cosmic Puzzles of Our Planets, Stars, and Galaxies: The Illustrated Edition by Jillian Scudder

Amazon is ubiquitous in our daily lives—we stream movies and television on Amazon Prime Video, converse with Alexa, receive messages on our smartphone about the progress of our latest orders. In Buy Now, Emily West examines Amazon’s consumer-facing services to investigate how Amazon as a brand grew so quickly and inserted itself into so many aspects of our lives even as it faded into the background, becoming a sort of infrastructure that can be taken for granted. Amazon promotes the comfort and care of its customers (but not its workers) to position itself as the ultimate service brand in the digital economy.

“West brilliantly documents how the global master of one-click shopping, ubiquitous surveillance, and monopoly power became a serious threat to democracy, the climate, and a humane workplace.” —Vincent Mosco, author of The Smart City in a Digital World

In this counterpoint to the grand narratives of design punditry, Carl DiSalvo presents what he calls “doing design otherwise.” Arguing that democracy requires constant renewal and care, he shows how designers can supply novel contributions to local democracy by drawing together theory and practice, making and reflection. The relentless pursuit of innovation, uncritical embrace of the new and novel, and treatment of all things as design problems, says DiSalvo, can lead to cultural imperialism. In Design as Democratic Inquiry, he recounts a series of projects that exemplify engaged design in practice. These experiments in practice-based research are grounded in collaborations with communities and institutions.

Inequality is an urgent global concern, with pundits, politicians, academics, and best-selling books all taking up its causes and consequences. In Inequality, Carles Lalueza-Fox offers an entirely new perspective on the subject, examining the genetic marks left by inequality on humans throughout history. Lalueza-Fox describes genetic studies, made possible by novel DNA sequencing technologies, that reveal layers of inequality in past societies, manifested in patterns of migration, social structures, and funerary practices. Through their DNA, ancient skeletons have much to tell us, yielding anonymous stories of inequality, bias, and suffering.

“Advances the discussion of the role of genes in inequality beyond the simplistic discussions so common in our time.” —James Heckman, University of Chicago; 2000 Nobel Laureate in Economics

You might also like The Next 500 Years: Engineering Life to Reach New Worlds by Christopher E. Mason

Although the world’s attention has shifted to drone-controlled bombing and cyberwarfare, the threat of nuclear war still exists. There are now fourteen thousand nuclear weapons in the hands of the nine declared nuclear powers. Even though the world survived the Cold War, we need to understand what it means to live with nuclear weapons. In this volume in the MIT Press Essential Knowledge series, Mark Wolverton offers a primer on nuclear weapons, from the science of fission and fusion to the pursuit of mutual assured destruction, the SALT and START agreements, and the Bomb in pop culture.

You might also like Nuclear Choices for the Twenty-First Century: A Citizen’s Guide by Richard Wolfson and Ferenc Dalnoki-Veress

The Digital Multinational: Navigating the New Normal in Global Business by Satish Nambisan and Yadong Luo

Digital technology has put globalization on steroids; multinational companies now account for one-third of world GDP and one-fourth of world employment. And yet complicating this story of unchecked global capitalism are two contradictory forces. Even as advances in digital technology enable borderless markets, a new nationalism has emerged, reviving protectionism and railing against digital colonialism. In The Digital Multinational, management experts Satish Nambisan and Yadong Luo examine how companies can adopt a dual strategy to cope with this new normal: harnessing the power of digital technology while adapting to the geopolitical realities of particular markets.

“I highly recommend this insightful book to leaders across the globe as they navigate the new normal.” —Harit Talwar, Chairman of Consumer Business, Goldman Sachs

“Picturing the Mind is a work to treasure and to return to again and again.” —Anil Seth, author of Being You: A New Science of Consciousness

Star Power: ITER and the International Quest for Fusion Energy by Alain Bécoulet

Nuclear fusion research tells us that the Sun uses one gram of hydrogen to make as much energy as can be obtained by burning eight tons of petroleum. If nuclear fusion—the process that makes the stars shine—could be domesticated for commercial energy production, the world would gain an inexhaustible source of energy that neither depletes natural resources nor produces greenhouse gases. In Star Power, Alan Bécoulet offers a concise and accessible primer on fusion energy, explaining the science and technology of nuclear fusion and describing the massive international scientific effort to achieve commercially viable fusion energy.

“Making this topic accessible to all is no small feat, but Alain Bécoulet has done just that!” —Bernard Bigot, Director-General, ITER Organization

You might also like Helmholtz and the Conservation of Energy: Contexts of Creation and Reception by Kenneth L. Caneva

Out of Touch: How to Survive an Intimacy Famine by Michelle Drouin

Millions of people around the world are not getting the physical, emotional, and intellectual intimacy they crave. Through the wonders of modern technology, we are connecting with more people more often than ever before; but are these connections what we long for? Pandemic isolation has made us even more alone. In Out of Touch, psychologist Michelle Drouin investigates what she calls our intimacy famine, exploring love, belongingness, and fulfillment and considering why relationships carried out on technological platforms may leave us starving for physical connection. Drouin puts it this way: when most of our interactions are through social media, we are taking tiny hits of dopamine rather than the huge shots of oxytocin that an intimate in-person relationship would provide.

“Throughout this insightful and entertaining book, Drouin highlights the path forward and left me, personally, optimistic about the future.” —Keith A. Grossman, President, TIME

You might also like The Bias That Divides Us: The Science and Politics of Myside Thinking by Keith E. Stanovich

Supernova by Or Graur

Supernovae are the explosions of stars. They are some of the most energetic phenomena in the Universe, rivaling the combined light of billions of stars. Supernovae have been studied for centuries, and they have also made appearances in popular culture: a glimpse of a supernova in a painting provides Sherlock Holmes with a crucial clue, for example. In this volume in the MIT Press Essential Knowledge series, astrophysicist Or Graur offers a concise and accessible introduction to these awe-inspiring astronomical phenomena.

Technology of the Oppressed: Inequity and the Digital Mundane in Favelas of Brazil by David Nemer

Brazilian favelas are impoverished settlements usually located on hillsides or the outskirts of a city. In Technology of the Oppressed, David Nemer draws on extensive ethnographic fieldwork to provide a rich account of how favela residents engage with technology in community technology centers and in their everyday lives. Their stories reveal the structural violence of the information age. But they also show how those oppressed by technology don’t just reject it, but consciously resist and appropriate it, and how their experiences with digital technologies enable them to navigate both digital and nondigital sources of oppression—and even, at times, to flourish.

“Technology of the Oppressed is a riveting read and a major critical feat. It leaves us with a new language to think about the technopolitical and the otherwise.” —João Biehl, author of Vita: Life in a Zone of Social Abandonment

This book charts the exploration of an unknown world: our own. Just as Renaissance travelers set out to map the terra incognito of the New World, the mapmakers of Terra Forma have set out to rediscover the world that we think we know. They do this with a new kind of cartography that maps living things rather than space emptied of life and available to be conquered or colonized. The maps in Terra Forma lead us inward, not off into the distance, moving from the horizon line of conventional cartography to the thickness of the ground, from the global to the local.

The Intermittent Fasting Revolution: The Science of Optimizing Health and Enhancing Performance by Mark P. Mattson

In The Intermittent Fasting Revolution, Mattson—whose pioneering research uncovered the ways that the brain responds to fasting and exercise—explains how thriving while fasting became an evolutionary adaptation. He describes the specific ways that intermittent fasting slows aging; reduces the risk of diseases, including obesity, Alzheimer’s, and diabetes; and improves both brain and body performance. He also offers practical advice on adopting an intermittent fasting eating pattern as well as information for parents and physicians.

“An excellent book, full of very valuable information to improve health and longevity from one of the pioneers and leaders of the ‘intermittent fasting revolution.’” —Valter D. Longo, University of Southern California; author of The Longevity Diet

You might also like Running Smart: How Science Can Improve Your Endurance and Performance by Mariska van Sprundel