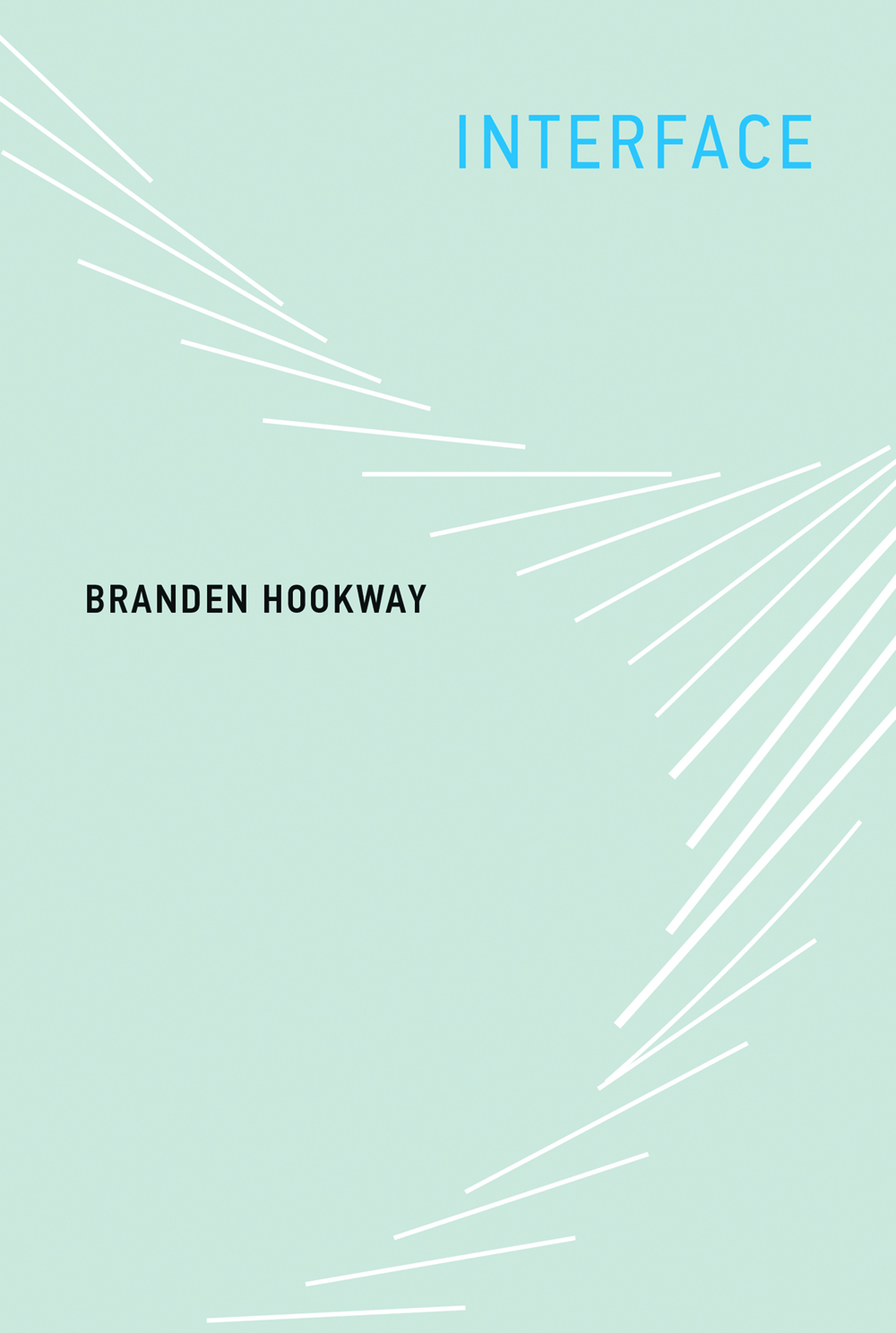 In this installment of our “Five Minutes” feature, Branden Hookway answers questions about his book, Interface, and the interfaces we encounter daily.

In your book you posit that the interface as a “form of relation.” Can you elaborate on this concept? What are the cultural implications?

There is something common to all interfaces that is not tied to the specificities of any particular technology. To see this as a form of relation is to say that all interfaces are similar in how they structure relations, with the idea that there is always a double moment in the operation of an interface. One the one hand, the interface is worked through towards some end, in which case it produces some kind of augmentation. On the other hand, the interface is experienced immediately, though often subliminally, as a training and compartmentalization of the body. For example, a pilot experiences flight as an assumption of control over an aircraft but also as a trained body inhabiting a cockpit.

The interface concerns not only the relation between human beings and technology, but also how these are embedded within their political, economic, and social contexts. In this sense, the interface can best be understood on cultural grounds, as an active moment of contact between culture and technology. Yet the ties between cultural meaning and technology are difficult to apprehend for being wrapped up in this double moment. For instance, one can experience a sense of authorship within which an act of mediation is hidden. Likewise the evolution of interfaces is often given in naturalized terms, as though it were an autonomous and inevitable outcome of technological development.

Can you situate Interface’s theoretical explorations within the canon of the philosophical and scientific works that precede it?

The problem of the interface is inherently multidisciplinary, with many possible ways to address it. My approach to this problem in the book was based on seeking out resonances in terms of process and behavior with what I see as the trajectory of interfaces in the world today. While Interface addresses the discipline most often associated with the design of interfaces, HCI (human-computer interaction), it also seeks out a much broader scope in an attempt to show how the interface cuts across all aspects of culture in its relation to technology. For example, the book positions the interface both along side the development of notions of power, thresholds, and actuality from Greco-Roman mythology to contemporary thought, and from within a lineage of theories of control from nineteenth century sciences of dynamics through cybernetics, information theory, and human-machine systems. My approach in situating Interface has also been influenced by field of architecture, which has long been concerned with discerning the meaning of designed environments, and more recently with a growing reliance on software in its own conceptualization and production.

What are the various types of interfaces that the average person encounters while going about in his/her daily life?

Daily life is more and more conditioned by interfaces of various kinds. From social media to smart devices, software environments to networks, the tendency in the evolution of interfaces is toward more natural, tangible, ambient, and ubiquitous forms, such that the encounter of an interface is more and more hidden within the act of its tacit use. The problem with this can be that it hides the compartmentalization of the self that arises from each of these discrete encounters. If these encounters are apprehended for what they are, there is more of an opportunity for realizing where choices is possible, as well as a sense of what is being lost in the transaction of gaining an augmentation.

How does the interface operate—or can be understood—in the context of games?

Much of how games have been theorized is based on the idea of the separation of the game from life. And this separation has to do with the rules of the game and the means of producing and policing the game space. The interface similarly operates according to a separation that produces another state. In a game, one voluntarily assumes the limitations imposed by a set of rules in order to be incorporated within game play. This sense of freedom within already given constraints is very much like the experience of using an interface. Given this, it’s not surprising that the history of interfaces has been intertwined with that of games.

How would you characterize contemporary culture’s relationship with technology and can you speculate on the future of human-machine interaction?

Just as the interface conceals its training of the body, so it does the effects of technological development on culture, which can likewise be seen as a compartmentalization. Certainly something is lost when technology becomes synonymous with culture. Another danger is that the naturalization of technology brings with it a naturalization of the political, economic, and social forms that accompany it, as though each were similarly inevitable. The book seeks out where strategies might be developed against this. The interface always remains a moment of contestation, and where there is contestation there remains the possibility of openness and freedom. And as much as the interface seems to offer the possibility of transcending the limits of humanness and culture, it also at the same time polices the boundaries between human and machine, such that the interface can only ever be polyvalent.