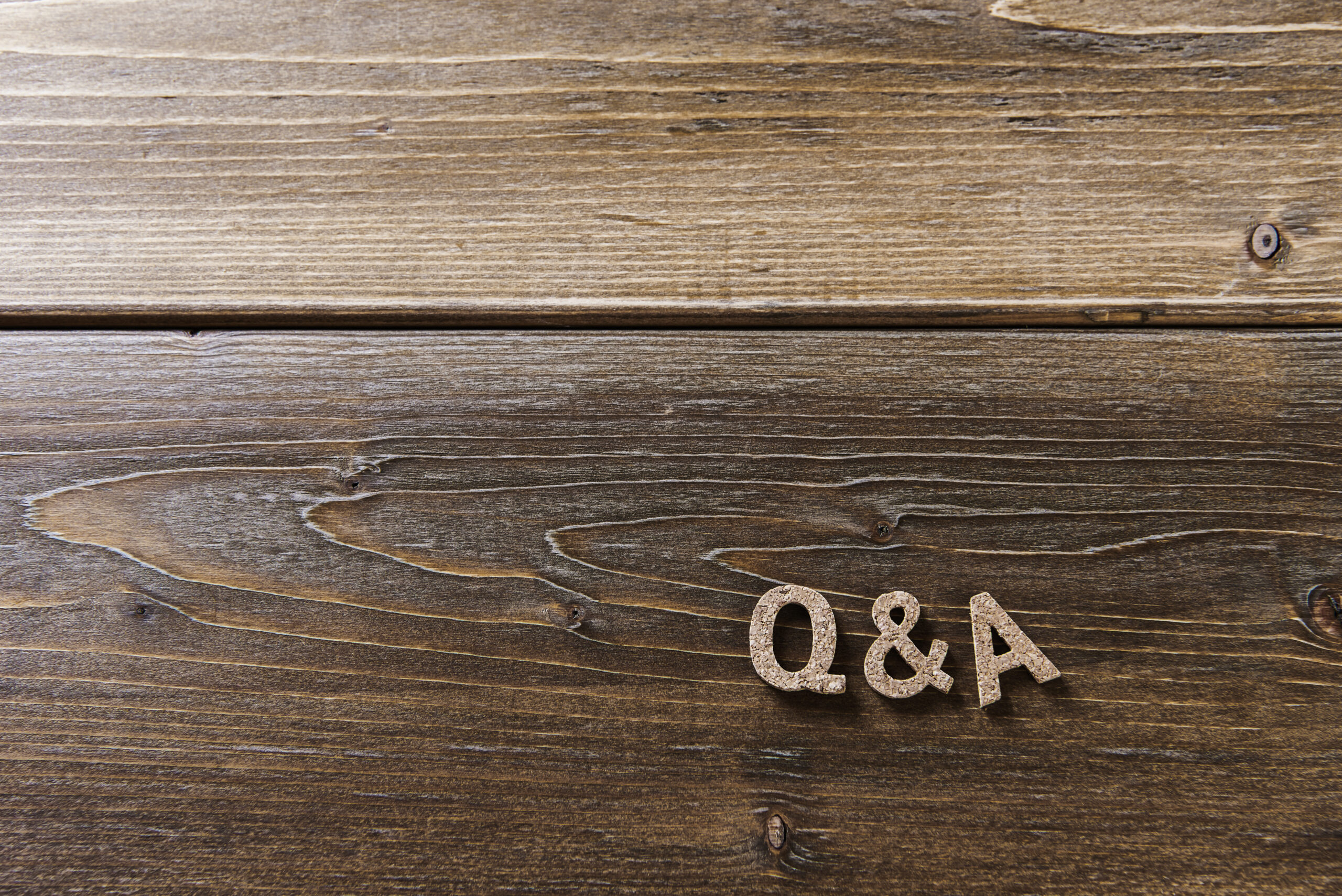 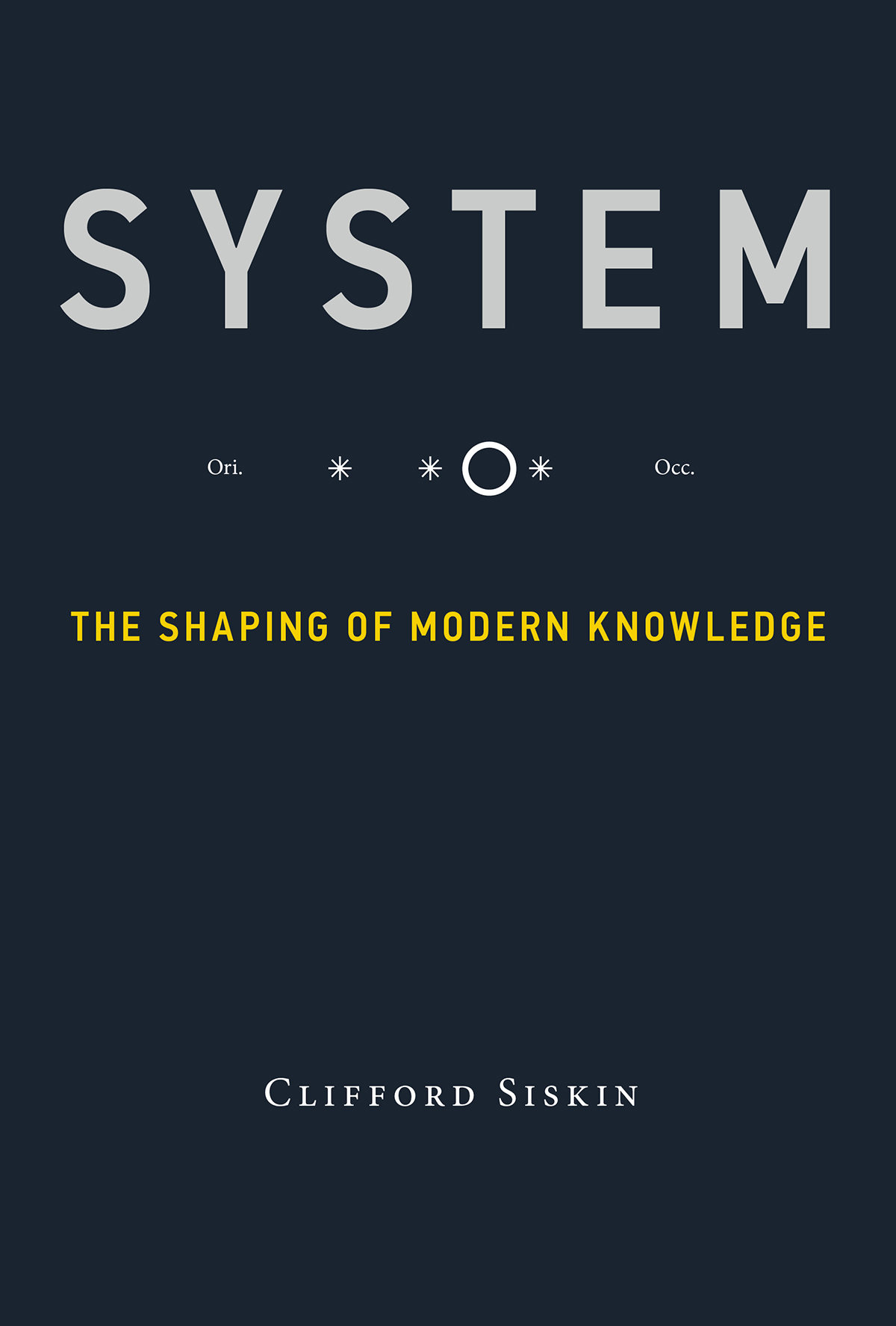 Clifford Siskin discusses his new book, System: The Shaping of Modern Knowledge, which explains the long history of “blaming the system” from Galileo to the political economy of the early-nineteenth century to today.

The book opens with Galileo’s “message from the stars,” which is depicted on the jacket. How did Galileo and Enlightenment thinkers contribute to the knowledge of our own computational universe?

In the histories I tell about system, I pair Galileo and Francis Bacon as helping to launch system on its upward trajectory at the turn into the seventeenth century. System was first used in English in the same year—1610—that Galileo first trained his improved spyglass on Jupiter and discovered that the world (read “universe”) was a world full of systems: Jupiter, like earth, was the center of its own lunar system—and both of those systems were part of a larger one: a solar system. System only became, to use Galileo’s own word, “really” interesting when it became plural—when systems started showing up inside of each other. Seventy-five years later, that interest led Isaac Newton to choose system as the genre to convey the philosophical impact of his discoveries. Empowered by that decision—a tale I tell in detail—system rapidly became the primary form for explanation during the eighteenth-century Enlightenment in the West. The linear growth of systems in print was paced by the publication of what I call Master Systems during the mid and late decades—Systems that attempted to include all previous systems—followed by a takeoff in specialized systems (of education, of the income tax) at the century’s end. By that point, system and the world were bound together in a powerful explanatory framework centered at the core of modern knowledge. When they changed, they changed in relationship to each other. Thus our new notion of a computational universe—as I outline in the Coda of the book—combines a new kind of system, algorithmic information processing, with new ways of comprehending the world, as something that systematically computes itself, perhaps into an infinite number of selves.

How do you define “system”?

If we assume that “system” is one particular thing—a single idea or a single concept—then we cannot possibly account for the fundamental roles it has played in so many realms of knowledge across so many centuries. Instead of getting stuck with a single, fixed definition that cannot possibly be adequate to those many incarnations, I explain system as a genre—as a form that changes shape and function over time. Genres are dynamic—they are historically emergent classifications that are empirical not logical. Instead of trying to fit system to an abstract   definition, my book asks and answers these fundamental questions about system: What things at what times were actually called system? What were their characteristic features? Did those features change? What work did this genre perform? And with what effects? From those inquiries, I explain system as a form that has worked physically in the world to mediate our efforts to know that world.

Why and when did system become something that was seen as tangible, rather than —as you suggest—a genre like the essay?

A major finding of this book is what I call the “doubling” of system.  It’s ongoing power derives in part from the ways that we use it as something both conceptual—a way of knowing the world—and as something that is really there, that constitutes part of that world. The fact that we have engaged system as not just an abstraction but as something material—something specific, concrete, and countable—helps to explain why system has worked so well in that world to shape knowledge. System helps us to avoid the philosophical quicksand of binaristic arguments that treat the abstract versus the physical as irreconciable opposites. This feature of doubling highlights as well how system as a genre has been adaptable to different conditions and substrates. Systems that physically exist in the written and printed form of the essay are as physically tangible as Galileo’s planet and moons and our own electronic and digital technologies.  Galileo counted two lunar systems and thus one solar one; in this book I count thousands of printed systems. In both cases, these systems are physically in the world that system helps us to explain.

How can the history of system help us understand this current political moment?

The publication of System between the UK vote on Brexit and the election of Donald Trump could not have been more timely. An early title for this project was Blaming the System, for one of the histories of system I tell is of system’s role in what I call the “history of blame.” Even as we admit new systems of all kinds—operating systems, support systems, ecosystems, phone systems—into our lives we do not hesitate to “blame the system,” as in that which in its most popular form, works both too well—you can’t beat The System”—and not well enough—it always seems to “break down.” It’s power is indexed by our capacity to find it everywhere and blame it for everything. The more systems we use, the more we’re convinced that The System uses us. Invoking The System has thus become a primary—perhaps the primary—modern means of totalizing and rationalizing our experience of the social and the political. Until recently, blaming the system was the engine of liberalism: The System was totalized as needing change, as capable of being changed, as providing the means of effecting that change, and crucially, as always failing enough to maintain an ongoing need for change. The power of that engine put Obama in office, but it now threatens his legacy. Blame has outstripped reform: people feel compelled either to exit The System—as with the EU—or destroy it—as in “draining the swamp” in Washington. Dating and explaining what sounds like changes in attitude—when did systems first become somthing that could be blamed?—would be a very difficult task. But if we link it to something that happened to a genre—to a specific change in how system was used—we can begin to understand blaming the system as a set of historical events. My book tells that long history, from system being blamed for falling short of the real back in Galileo’s time to the political formulation of “the English system” that emerged from Britain’s Glorious revolution to the onslaught of the dismal systems of political economy in the early nineteenth century.

You created the Re:Enlightenment project to bring together people from all disciplines to reconceive how knowledge works. What does this twenty-first-century Enlightenment look like?

Our webpage explains the goals of the Project and lists the many ways that we have tried to recover and transform our Enlightenment inheritance. All of those activities are aimed at constructing an operating platform of concepts and tools for our expanding network, one that can bear the load of Re:Enlightenment. Readers of System have in their hands what I hope is a useful example of that effort.  This book was shaped and reshaped  by the shared activities of the Project. They have left their mark on it in three primary ways: in content, in organization, and in the audience it hopes to generate. A key strategy of the book is not to write a single “history of system” but to put system into multiple histories. That strategy emerged from the conference and volume that gave birth to the Project: “Mediating Enlightenment” and its offshoot, This Is Enlightenment, generated the tool we call the “history of mediation.” To explain system as a genre that mediated knowledge, the original plan for the book was radically altered to follow the touchstones developed by Re:Enlightenment to reanimate the Enlightenment goal to know the world: Past and Present, Mediating Knowledge, and Connectivities organize the book into its primary parts. Included repeatedly in those parts are the collaborative voices of my Re:Enlightenment colleagues. Finally, the most important goal of this book is to extend that collaboratory through the kinds of readers it attracts. The MIT Press has helped the book take the first step in that direction by securing the endorsements on the back of the book jacket. System enters the world with the support of a historian, a physicist, and the head of a major civic institution. That Enlightenment mix of disciplines and of leaders inside and outside of the university is what all of us hope twenty-first-century Enlightenment will look like.