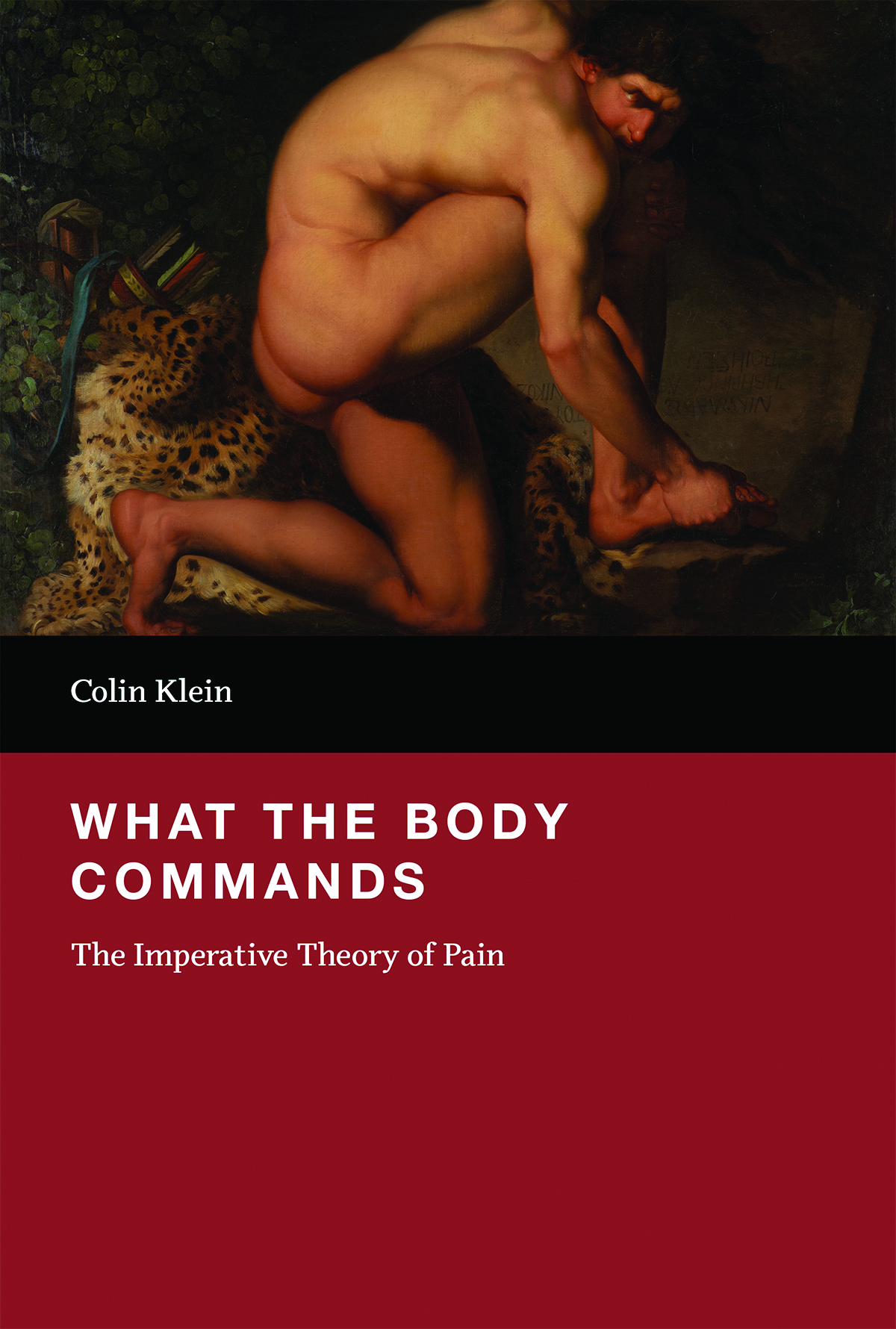 Today’s five minutes with the author features Colin Klein, author of What the Body Commands. Here he asks us to consider the pain of a sprained ankle, and informs us that pains are unusual compared to other sensations.

Consider the pain of a sprained ankle. What does it tell you? Most philosophers assume that the pain informs you about the sprain: the message of the pain is something like that conveyed by the sentence “Your ankle has been damaged.” In contrast, I argue that the pain says something more like “Don’t put weight on this ankle!” Pain thus commands you to do something rather than informing you about the world. In the book I defend the strongest version of this, pure imperativism, which claims that pains only command and lack any informative content at all.

Of course, your body doesn’t literally tell you sentences in English; neural content has its own language. I take the parallel with ordinary language seriously, however. Much of the book is devoted to extending tools developed for the analysis of ordinary language imperatives (and developing new ones), using those to explore the content and the force of pains.

Pains differ from (e.g.) visual sensations in at least two important ways. On the one hand, pains motivate you in a particularly direct and unmediated way. The pain in my ankle gives me reason to refrain from walking. It does so all by itself, without requiring any further reflection on what I want. That’s not true of vision. The sight of a cup of tea can motivate many different actions (drinking, washing up, or nothing at all). What the same visual experience motivates me to do changes based on what I want. Conversely, vision is pretty informative: the sight of a cup of tea is decent good evidence that a cup of tea is there. Pain has always impressed me with how opaque it is. I can be legitimately unsure whether my ankle is sprained, or broken, or gouty, or whatever. I can be similarly confused about whether I’m about to sprain it, whether it has been sprained, whether it’s just sore as it recuperates from a mostly healed sprain. That’s why pains are often so frustrating!

The imperative account is crafted to handle both of these differences. I say “Close the door!” to get you moving. You may have no idea why I’ve said it; importantly, that doesn’t really matter. You just need to know what to do. So too with pains, I argue: your body wants to get you to do things, and the commands it issues don’t carry any details about why.

You say that “pain is not a symptom, it is part of the cure”. Would you expand on this? How would I know that my body commands the right cure for me?

In ordinary circumstances, pains play a vital role. Pains keep you from doing things that would injure yourself, and they keep you recuperating after you have been hurt. The latter is arguably the more important function. As I discuss in the book, people born without the ability to feel pain usually die young. But it’s not serious injury that does them in—it’s that the wear and tear of day to day life never really heals, and eventually overwhelms them. When you need to protect your body, pain tries its hardest to make you do so. That’s good, because otherwise we’d be inclined to push ourselves at the expense of our health. I think the same is also true of most bodily sensations— hunger commands us to eat, thirst to drink, and so on.

The pain system is adaptive, and evolutionarily old. But it can also go wrong. Not all pains are actually worth listening to; even a well-functioning pain system makes many mistakes. Treating pains as mandatory commands also sheds light on the problem cases. Even if I know my ankle pain is mistaken—that it’s merely caused by a pinched nerve in my hip, say—I still can’t avoid taking bodily commands seriously. I think this ultimately sheds light on some of the especially bad features of chronic pain.

A good part of the book is devoted to explaining the relationship between pain and suffering. Why is that distinction so important?

Sometimes we speak of being painfully hungry, painfully tired, or painfully lonely. We usually distinguish these from bodily pains or physical pains. It’s not obvious what all of these states have in common, and philosophers have tied themselves up in knots on the question. I think the key is to distinguish them: into pain proper (which is what the book is about), and suffering, which is a feeling that can qualify many other feelings. The two do different things. Pain motivates you to protect your body. Suffering motivates you to get rid of pain. That might include actions which would eliminate pain but not the underlying problem (like taking morphine). Conversely (and more controversially), I think that pains usually but not inevitably make you suffer. That’s because bodily commands aren’t intrinsically bad. That’s sometimes taken as a reason to dislike the imperative theory. Carefully distinguishing pain and suffering, and talking about why pains are usually bad, is an important part of the defense.

Pain asymbolia, a pathological condition where patients claim to feel pain and yet they are indifferent to it, appears to be a counterexample to the imperative theory of pain. Is it possible to explain pain asymbolia in a way that is compatible with imperativism?

Yes, I think so. Asymbolia and related cases of non-motivating pains (such as so-called “morphine pain” and schizophrenic dissociation) are the biggest challenge to the imperative theory. I think that if you look carefully at these cases, you find a curious common feature: patients are not just indifferent to pains, but to any threats to their body. I suggest that what’s gone wrong in asymbolia, is actually a more profound failure: asymbolics no longer accept the body as an authority whose commands they must obey. That’s not something we can just choose to do in ordinary life, and for good reason! Drugs and damage might well provoke such a breakdown, and the experience is always like a dissociation from your body and what it’s telling you. That lets me preserve the imperative account. Pains are always imperatives, even when we dissociate from them. Under rare circumstances, though, we may cease to be moved by our body’s commands.